One thing that our trip to Las Vegas taught me was that all pizzas are not the same. People have been telling me this for years, but since I don’t think I ever had a particularly terrible pizza so I didn’t really get it. As far as I was concerned, the formula is pretty much the same, dough, sauce, toppings, but how those otherwise simple ingredients are executed can make a huge difference.

Not really feeling fancy, and feeling hungry before the New Years Eve Eve (yes eve eve) Deadmau5 concert at XS we went to California Pizza Kitchen (CPK) in the Fashion Show Mall. Even Vegas has reduced hours on Sundays, it was surprising how many places were closed early. I had been to CPK before around two years ago, and enjoyed it. Maybe it’s because my experience of Vegan pizza has vastly improved since that visit, but this time CPK was not great or awesome, it was just soft crust and tomato and vegetables without any thing special about it.

This time around, our server was really awkward, and overtly made a face when we asked for the pizza to be cheese-less. The food wasn’t awesome, the experience wasn’t awesome, and we left feeling pretty disappointed (and kind of hungry.) During the same trip, we also went to A Slice of Vegas in Mandalay Place. A Slice of Vegas had recently added a vegan menu to their regular rotation (another sign of the veganization of Vegas that’s been going on for the last couple of years.)

A Slice of Vegas is a casual eatery/sports bar specializing in pizza and “Fun Italian Dining”. You can watch any sporting event on giant TV’s arranged around the room. eat vegan wings, pizza, salad, whatever. It’s not exclusively vegan, but it’s got a completely vegan menu. You can check it out here or here.

We started with “Not You Mamma’s Garlic Bread” and it was pretty delicious. It is Italian garlic bread, but then it’s also green. I thought… kale? (how vegan of me) but thankfully, no, it’s not – it’s (obviously) a basil pesto, with garlic, and it comes with a delicious roasted head of garlic. Definitely worth trying. We also had the “Vegan Faux Pie.” Why it was faux, I can’t tell because it seemed pretty real to me. Delicious chewy crust, a perfect amount of tomato sauce, diaya cheese, topped off with an assortment of diced vegetables. It was very tasty, and the crust was fantastic (a good non-thin pizza crust.)  Other notable pizzas that would have ordered if we were feeling hungrier – the BBQ “chicken” pizza or the meatless meat ball pizza. Both seemed like delicious options – that might be worth checking out the next time we’re in Las Vegas. 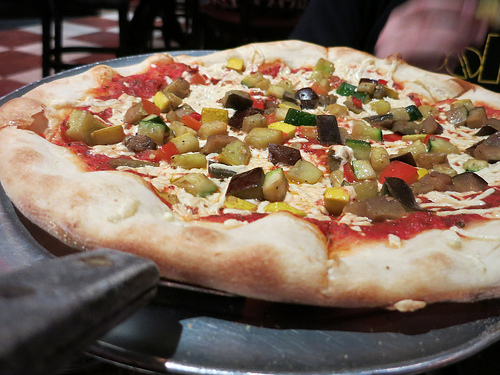 There was also dessert. A vegan chocolate cake. With peanut butter frosting. And we didn’t order it.

Things I learned: There is such a thing as no room for dessert. Not all pizza is the same. Some pizza is better than others. (also – I appreciate Toronto’s Pizzaiolo just a little bit more now.)

We’ve travelled through time and space, from San Francisco, to Las Vegas.
– Millennium – Happy birthday to me!
– St. Francis Fountain – Brunch of Champions
– Souley Vegan – Amazing vegan Soul Food in Oakland
– Herbivore – Brunch of okay.
– Gracias Madre – Delicious food with a side of sexism.
– Another visit to Souley Vegan and a quick run to Cinnaholic.
– First Night in Vegas – Living it up with vegan room service.
– Brunch at Tableau – Beautiful, tasty, with friendly service.
– Ronald’s Donuts – Vegan Donuts, ’nuff said.

But wait, there’s more. (well, wait until next Tuesday)