I felt compelled to cook a semi-elaborate dinner. And it all started with a container of Faux Gras from the Regal Vegan. We picked it up at the NY Vegetarian Food Festival, and it seemed like a good idea to actually use it soon. Since I associate foie gras with french cuisine, there began the French theme.

I flipped through our cookbook collection, on the bookshelf and digitally, and one cookbook had what I was looking for:  The Healthy Voyager’s Global Kitchen by Carolyn Scott-Hamilton. 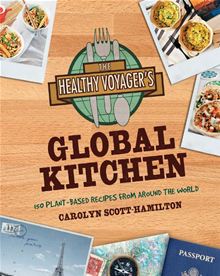 I also wanted to make this: Escargot Au Bourguignonne from Veganize it! But ran out of time (and honestly – there was enough to eat last night!) First of all, the Faux Gras is delicious. I have no point of reference on how it tastes compared to the real thing, and I’m glad. Foie gras is gross for a lot of reasons, but back on topic. The Regal Vegan makes Faux  Gras with California walnuts, lentils, and carmelized onions – and probably some kind of other culinary magic (maybe I can just taste the Love, Respect and other nutrients.)

Next I brought out the souffle. I loved the souffle. I changed the recipe slightly – very slightly – and also added the Vegg. JC said… “this isn’t vegan, what are you feeding me” and I had a big smile on my face. Success. And thank yous to Ms. Scott-Hamilton and Rocky of The Vegg, for a lovely recipe and a lovely product. As an added bonus, I could remove the souffle from the ramekin and it still kept its shape, and it was yummy fresh out of the oven… and also the day after for lunch.

The recipe was enough for four small dishes. The Sans Coq Au Vin was am excellent excuse to use two different bottles of red wine we had at home. They were good, but had been sitting on the counter – likely never to be drank again. It’s not very pretty (yeah – check out those little tiny eyeballs, I mean pearl onions), and I opted to break some rules and put the marinated gardein cutlet on a bed of brown rice, but it worked out in the end. As an extra bonus, it was actually quite saucy and tasty.

Do you ever get the urge to make a themed dinner? Sometimes it’s a race to make everything within a short period of time, and sometimes JC & I don’t start cooking until after 7.  I suspect next time it will be Italian – since we have a container of Regal Vegan Basilicotta waiting to be eaten.