After a few hours in London, JC and I kept driving south to Detroit. A brief boarder crossing experience later and we were in the city again. I like Detroit, and I think it’s because it feels like it’s building itself up again, a movement of people trying to grow where they’ve been planted. With all of the community and collective projects that are going on, it’s one of those places where anything can happen, and it is happening, and that’s often a good thing for budding entrepreneurs or organizations trying to make things happen.

Detroit has been on my radar especially for local group organized food policy and urban agriculture work. There are organizations that are doing exciting and inspiring work – as an example, check out Food Lab Detroit. They’re an organization that acts as a hub for existing organizations and business, and provides a space for Good Food entrepreneurs to collaborate and share information, knowledge, resources, and financial/emotional/other support.

In partnership with others, they have a kitchen space for local entrepreneurs called Detroit Kitchen Connect. At least from talking with food makers here in Toronto, I know how tough it can be to find available and adequate commercial kitchen space, so I wonder how well the program goes in real life, but regardless, I’m glad it exists.

There are so many awesome groups in Detroit doing inspiring work that we can learn from, and I can’t possibly list them all, and I’m sure many of them don’t even have websites because they’re busy doing other stuff, but just a few more… Detroit Working for Environmental Justice, Keep Growing Detroit, and the Detroit Food Policy Council all seem like solid groups building up community, taking action, and trying to make long term changes to food policy in the city. 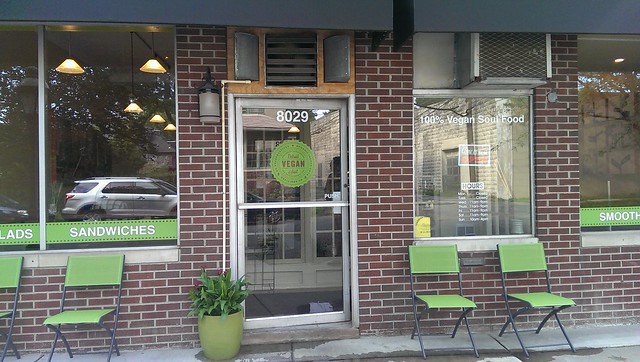 Our first stop was Detroit Vegan Soul, because as much as I loved Chil’s frozen quinoa dessert, we wanted to eat some more traditional dinner food too. One thing I think is super cool is that Kirsten Ussery, one of the co-owners of Detroit Vegan Soul, is also on the FoodLab Steering Committee. No matter where we travel to, or even at home, I especially like supporting businesses involved in doing good work in their community.

Once we got to the area and parked (down the street… for free even), service was fast and friendly. We sat close to a window and took in the bright space with wood and green accents. It’s not a huge space, with seating for around 30 people, but a steady stream of people were coming and going. 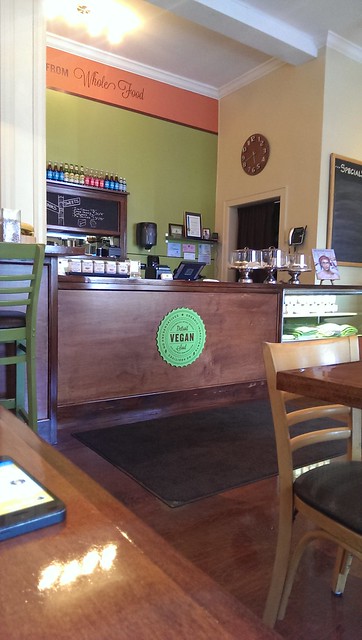 The homemade hibiscus punch that our server recommended was excellent to start with. It was cold and refreshing, and sweet with that unique hibiscus flavour. Considering it was such a hot muggy summer day, that drink was perfection in a glass. I would have taken a picture of how lovely it was, but I drank it faster than expected.

You can check out the menu online but it’s got some solid options, but the two that jumped out at us were the Soul Platter (because when it doubt – order the combo) and the Catfish Tofu dinner. We decided to do the usual order two entrees and share. We started with the collard green spring rolls. 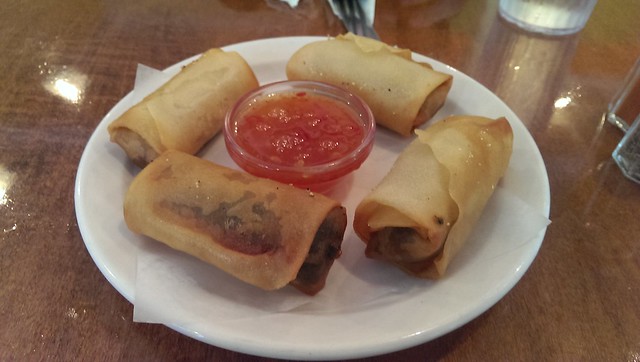 I was pleasantly surprised when they arrived that there were 4 mini spring rolls to share, vs 2 cut spring rolls to share (these are the things I notice…) It was such an interesting fusion of Asian and soul food cuisine. Each spring roll was stuffed with smoked collards, and the sweet chili sauce offered a nice sweet touch of spice. 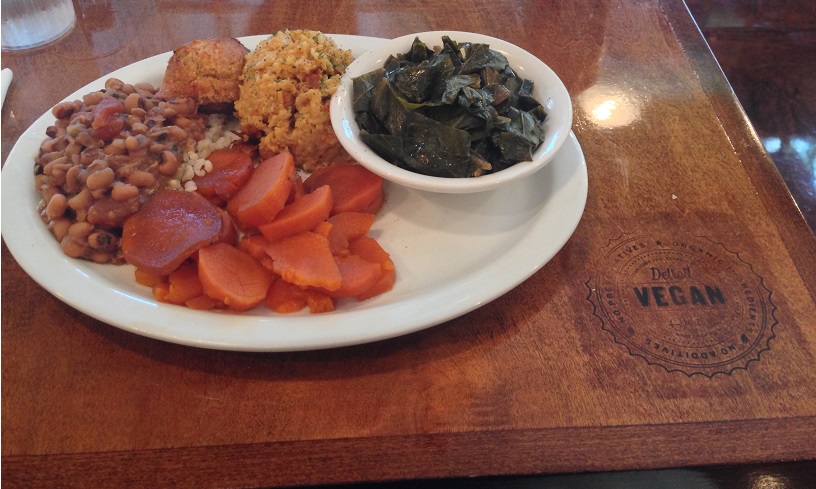 The Soul Platter was an easy choice because the moment we mentioned we were at Detroit Vegan Soul, this platter was recommended, and I can see why, it’s a great sampling of what DVS makes. With Mac-n-cheese, maple glazed yams, black-eyed-peas with rice and  a cornbread muffin, plus a bowl of spiced collard greens.

I think the collards were probably my favourite, especially since I don’t normally eat them very often. This platter can be gluten-free without the cornbread muffin. 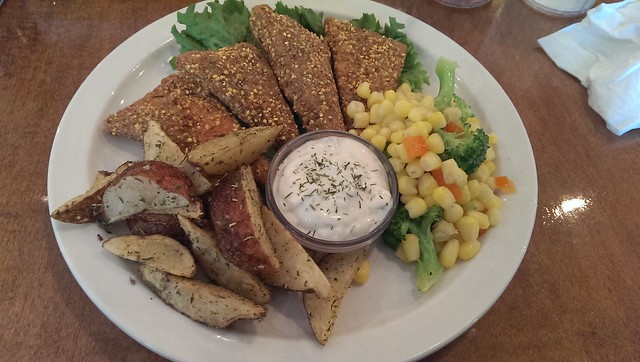 The Catfish Tofu is a few pieces of cornmeal battered tofu, with broccoli/corn and redskin potatoes & onion on the side. With a healthy helping of tartar sauce. I’m not sure how I feel about this dish. I found the tofu a bit too thinly sliced, but part of me thinks I would have loved it more as a sandwich. But then I wouldn’t have had the fabulous redskin potatoes.

When I was poking around online about them later I noticed repeated mentions of the okra stew, which I didn’t notice on the menu, otherwise I would have ordered it.

All in all, we had a really nice time at Detroit Vegan Soul, and some nice food. If you’re partial to desserts they also have several options to choose from – on the day we went in there were several varieties of cupcakes and a German Chocolate Cake, but we skipped it, since we had lunch in reverse, with dessert first in London, Ontario.

Other vegan friendly food recommendations we got in the Detroit area were:

Do you have any others?

We’ve been to Seva, Avalon, and Inn Season before, but we opted to check out Michigo Pizza for a late dinner. I will regale you (maybe) with tales of my fantastic Chicago-style deep dish pizza soon, but if you’re vacillating on visiting Michigo – it was great.