This isn’t the first time I’ve tried the Vegan Toona from Sophie’s Kitchen, but it was the first time I was able to buy it in a store. We sampled two of the varieties of Vegan Toona at this years’ ExpoWest, and I wasn’t that keen on it. But I was curious if the shelf variety would be any different from the Toona we sampled at the event, or if our experience of eating would be different/better this time around (what can I say, I’m an optimist.) 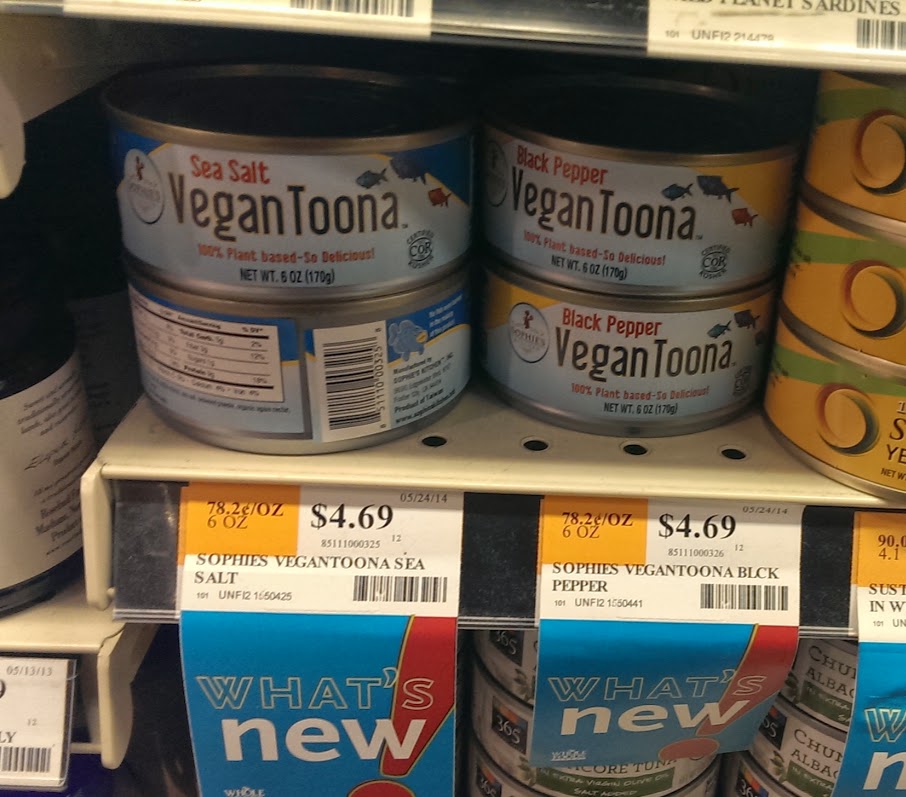 As of right now, you still cannot buy VeganToona in Canada (unless you order online) – these cans were purchased from the canned seafood area from a Whole Foods in Michigan. They were $4.69/can at the time, but while the amount initially gave us pause, it actually looked competitive by volume with some of the fancy dead fish products that Whole Foods sells. 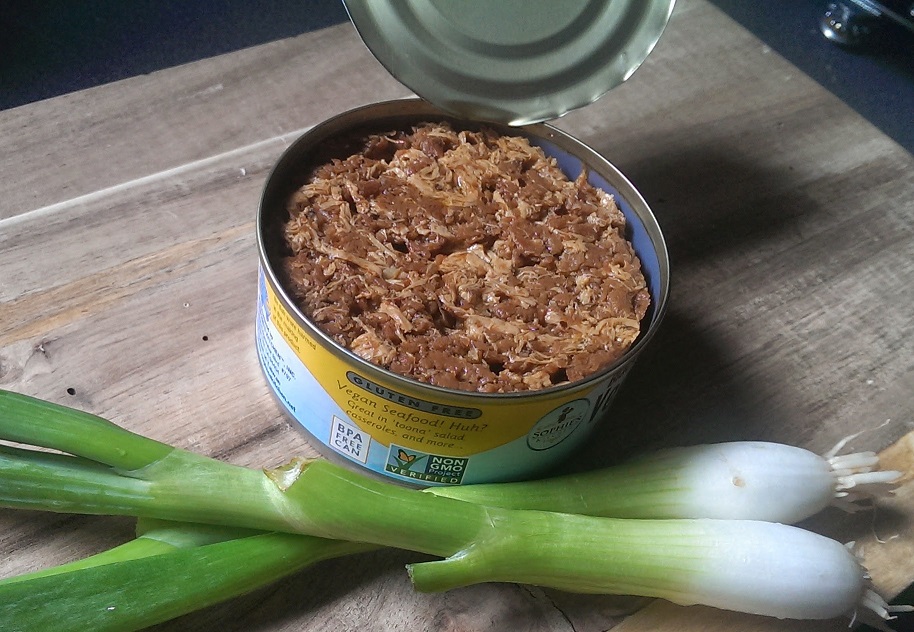 Opening the can, it’s like shredded mystery packed in oil. if you’re expecting anything like light pink tuna flakes, you’ll be disappointed, but since I don’t mind if compassionate analogues don’t look like what they’re attempting to imitate, I wont hold that against them. 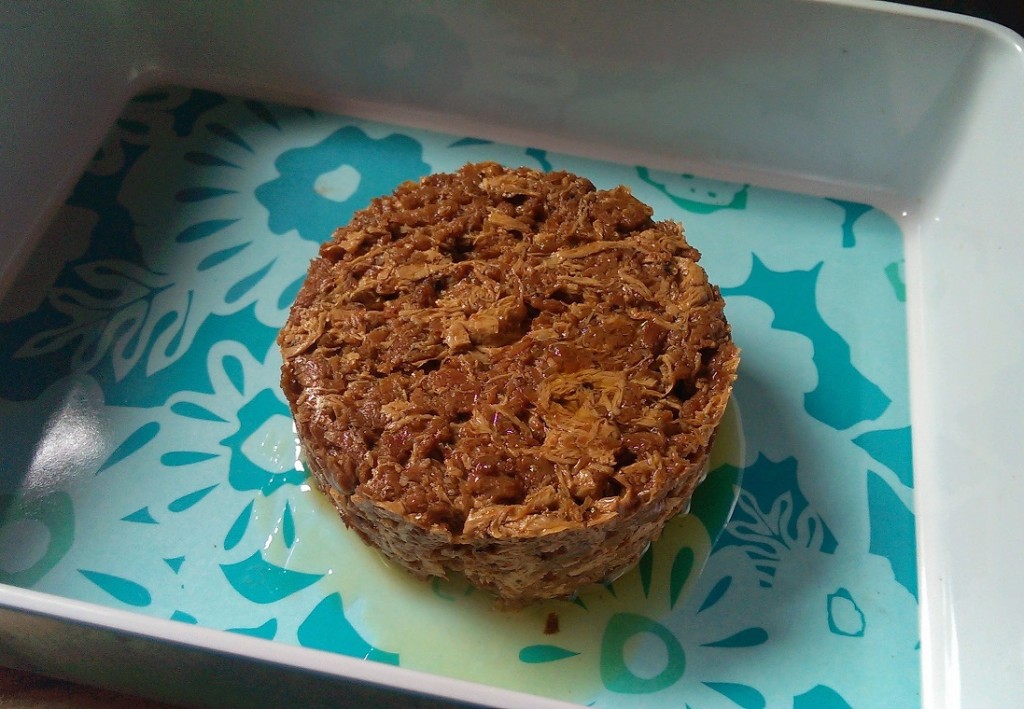 I think I voluntarily made a tuna fish sandwich once in my pre-vegan days, but I really like the option of a small tinned vegan meat product, that could potentially be taken on a trip, or used to make a quick sandwich. 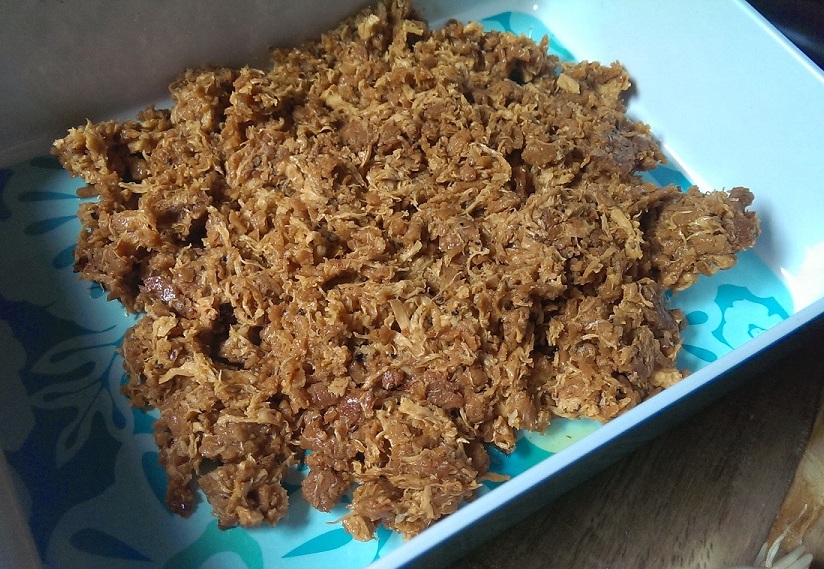 So I made a quick sandwich with some just mayo we had also picked up from Michigan. 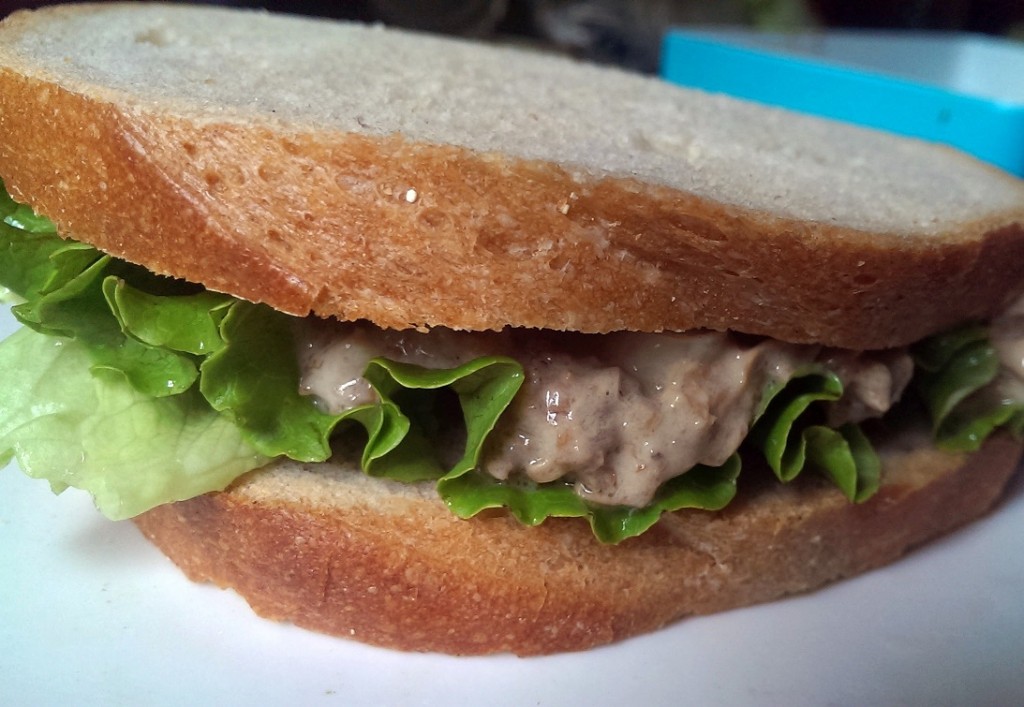 Directions
Open and drain as much of the oil from the Vegan Toona. Throw it in a bowl or container, add the mayo, chopped green onion, chopped yellow onion, lemon juice, black pepper, and mix it all together.

Make a couple of sandwiches in your favourite sandwich making style. I added a bit more mayo to the bread, slapped on a lettuce leaf on one side, and about 3 slices of tomato, and put it all together. There is enough Toona in each can for 2-3 sandwiches.

So what did we think.

I know that I don’t like the Toona when it’s warm. I learned that at ExpoWest. I sampled a bit out of the can after draining it, and it was better than I remember. I think it helped that I didn’t have any fish-like flavour expectations this time around. Flavour expectations are not your friend with the Vegan Toona, so try and get rid of them before you dig in.

Next, turning the vegan toona into a toona salad sandwich made it much better. A few people I’ve spoken with have just eaten it out of the can expecting it to be good. Don’t do it! Look for tuna recipes online and make something with it (like this Toona Lentil Salad from Compassionate Tummies.) I don’t feel it stands on it’s own.

Overall, it has an interesting flavour, texture, and is a unique product that you might want to try if you have the opportunity to do so. That said, I’m still kind of ambivalent about this product though – I would probably buy it again, but mostly for lack of other options. I like the small size can, and I like that I could take it on the road easily without worrying about spoilage or messes.

I’m left with the same feeling I had post ExpoWest, if I had the option, I’d rather have Caroline’s Naturals Fishless Fish were their products available anywhere near me, but since they’re not, Sophie’s Kitchen Vegan Toona is the next best thing (if you like that sort of thing.)

One thing you’ll notice here is that the Sea Salt and Black Pepper have a slight difference in their ingredients – Sea Salt version does not have soy.

Have you tried Vegan Toona? What did you think? (and what did you make with it?)

Updated to Add, you can now buy this product in Canada, but it’s a bit more expensive.