I hope to have photos from the wedding soon, I might end up sharing the wedding story sans photos, because there are going to be a lot of them in the next few weeks.

In the meantime please read Kailey’s blog (Ms. Soul to Bowl sauce herself) about being one of our wedding crashers, It’s so weird (& I mean that in the best possible way) to be blogged about. It also seems kind of like the natural result of inviting semi-strangers to our wedding via this blog.

JC and I spent a week in the beautiful North Bruce Peninsula for some much needed rest & relaxation. The funny thing is, that while we’ve talked about cottaging a lot the past couple years of knowing each other, this was the first time we had ever actually gone cottaging together (I had gone a total of two times since moving to Toronto, each time on planning retreats with the TYFPC.) JC rented a car, we stopped in to Through Being Cool and stocked up on some cheese buns, donuts, and other treats, and then we drove several hours to Tobermory. The benefit of driving in the autumn is that the colours in Ontario are beautiful, the trees are green, orange, gold, yellow, and red, and just truly awe inspiring. As someone from Alberta I’m especially aware of the diversity in colours because we normally didn’t get such vivid reds. (Why do leaves change colour? Go read this.) Our time in the North Bruce Peninsula was mostly spend indoors, rain and clouds were a constant companion, but whenever the sun appeared, and we could go out we did.

I had hoped to go to the Ancient Cedars Cafe while in Tobermory, the vegan-friendly restaurant a friend had raved about a few months earlier, but unfortunately, we were greeted with this sign when we got there:

We would see many more “closed for the season” signs on places around town, but we didn’t let it get us down. We will just have to come back during the in-season and check out some of the other local vegan-friendly suggestions from Laura the Blue Eyed Bookworm (like the Crowsnest Pub – vegan nachos.)

There is one grocery story in town – Foodland, which sells the usual Foodland grocery options, and stocked up on tofu, soy milk, coffee, produce, and junk food.

The cottage we were staying at was right on the rocky edge of Lake Huron, and it was amazing to be able to look out the window and see nothing but water for many kilometers. It’s beautiful and peaceful and gave us lots of time to just relax and spend time together after what seems like a very long time of being on the go or running on a schedule that we didn’t quite control. 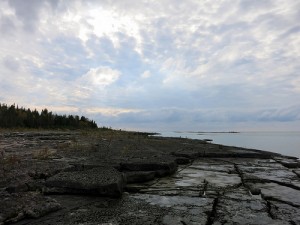 The first day we got there was probably one of the nicest, but the area was perpetually cloudy (which is probably why it’s considered the offseason), so we spent most of it inside, played a few games of Magic: The Gathering and Hearthstone, read books, drank hot chocolate & hot cider down by the dock, and made food together. I never felt bored out there, but ultimately we did very little. And enjoyed it. Which is a surprise since so much of my travel has always been about doing as much as possible in a short period of time.

One of my favourite cottage meals was the little thanksliving celebration we had together. We had maple roasted baby carrots, a Gardein Holiday Roast (we picked this one up before we left Toronto at Good Catch), gravy, rice, peas, corn, and a roasted pepper squash. Not as elaborate as some years, it was simple and delicious.

I left feeling refreshed, and ready to jump back into the real world. It’s amazing what a little time away can do. I hope to write a few more posts on the beautiful time we had in the North Bruce Peninsula, but for now this will have to do.

Have you ever been “cottaging”? It’s one of those things people in Ontario talk about quite often, but not something I experienced much growing up in Alberta.