Why has it taken me so long to talk about this? I don’t know, but my wedding based excuses are going to run out soon. 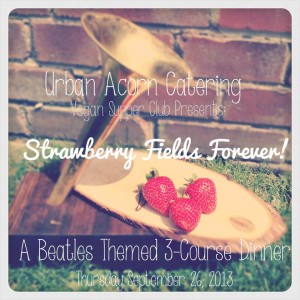 Many many Thursday’s ago I went to Bento Miso for Urban Acorn’s Beatles themed supper club. It was a great opportunity to talk to other people interested in food and meet the people behind Urban Acorn, and learn a little more about their approach. They bill themselves as “flexitarian” which is one of my least favourite words in the dictionary, but other than that I’ve really enjoyed their approach and style towards vegan-friendly foods. (And making connections online, and social media in general, and visual presentation, etc etc) Our gracious hosts were welcoming, friendly, and kept the food and conversation going.

Dinner was casual and inviting, the usually desk and laptop filled coworking space of Bento Miso on Richmond Street was transformed into a dining area with one long table, and several participants sitting around and chatting. I was late, but it didn’t matter, appetizers were being passed around, and the stage was set for a relaxed several course meal.

I liked that Urban Acorn had sourced local and vegan friendly alcohol for the event (thanks Barnivore) – I helped myself to a bottle of Mill Street Organic and waited for the food to arrive. The appetizers were all interesting and perfectly sized to stuff in ones face. My favourite was easily the potato pancake topped with sweet onion chutney, but it’s hard to really pick favourites when their just all around pretty great. Little cups of a slightly sweet, slightly spicy lentil marsala were passed around, resting on a bit of white rice. These managed to walk the line between firm while still being cooked for both the rice and the lentils for which the chef gets extra respect, because I’ve done that to lentils only once or twice in my life (and I’ve eaten a lot of lentils.)

I forgot to take pictures of one of the hors d’oeuvres – a pea stuffed baby potato. Soft, savoury, and bite sized. But since I’m a professional, I’ve drawn this replica of it here (not to scale): 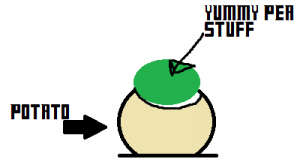 Next came the borscht – Borscht in the USSR (Back in the USSR) – diced beets, in a savoury sweet beet broth. Growing up with traditional borscht I’ve got a pretty high standard for borscht, so I’d say this one was pretty good, and I’d eat it again – but my mom’s is still better (can’t beat extra tablespoonfuls of love she throws in. Sorry, I’ve got biases, and I’ll admit to them.) Following that we had stuffed peppers –  Sgt. ‘Stuffed” Pepper and the Lonely Hemp Heart Band – which were colourful poblano peppers, roasted with layers of bean mousse, avocado, and some pico de gallo. And finally, it was time for dessert – The Strawberry Field Cheesecake Forever Vegan Cheesecake, a creamy amazing cake made from cashews, strawberries, infused with local lavender and topped with bits of chopped basil. My favourite part other than the food was when I wrote Not Michelle on the “What’s your Favourite Beatles Song?” whiteboard question. They were kind enough to omit playing it.

Urban Acorn has been pretty active since the Beatles Themed Dinner Party, last week they did a 4 course vegan Thanksgiving, amongst other things, which I probably would have gone to had we been in Toronto.