I bought a bag of coconut pieces yesterday on a whim from Karma Co-op. Someone else had a bag, and it caught my eye – an innocent bag of coconut flakes to some. But to me it said…. “make me into a smokey coconut sandwich” – but not actually since then I’d be talking to bags of coconut.

One bag of the bigger-than-shredded coconut cost a little over $9, and had around 6 cups worth of coconut flakes in it. Since I’m too lazy to crack open my own coconut, it was especially a steal of a deal. (But I picked up the last bag they had…)

There are so many different varieties of Smokey Coconut, Coconut Bacon, Vegan Bacon, Or whatever you want to call it.

But here is what I ended up using for my version of the smokey coconut flakes, and I really really really liked it (and I wasn’t alone). Preheat oven to 350 F (or 175 C) and put all of the coconut flakes in a bowl.
In a separate dish, mix all the other ingredients.
Pour liquid into the bowl full of coconut flakes and stir everything together until completely coated
Line a pan with parchment paper, spread a thin layer of coconut flakes onto the pan, and put the pan in the oven at 350 F.Stir everything at around 10 minutes and leave in for another 6-7 minutes, until golden brown and delicious.

Here are a couple shots of the Coconut in action:

Last night I made sandwiches with the coconut flakes. Some veganaise, sliced tomato, and some lettuce on sliced olive bread. 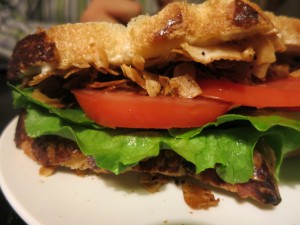 This morning JC made a beautiful stack of pancakes. I had left a jar of the coconut flakes on the dining table from the night before and as these pancakes were sitting in front of me, it dawned on me that mixing maple syrup, coconut flakes, and pancakes would be a brilliant idea. And so, the smokey coconut maple pancake taco was born. Next planned use for the coconut flakes is on some kind of maple cupcake. Do you have any recipe recommendations? I’m leaning towards either veganizing this one from Martha Stewart, or just using this recipe from Vegan Cuts.