I have been house/cat sitting for a friend for the last couple of weeks, and during that time I’ve gotten to know Evergreen Natural Market (161 Roncesvalles Ave, Toronto) really well. As it is, I go there fairly often, even though I don’t live in the area, but now that I’m right in the neighbourhood… well, I’ve probably gone everyday. Last week I saw something NEW and tasty looking. It also had that nice shiny V word on it and looked like something I might want to eat. Hello Soul to Bowl Sauces, and get in my belly. I hesitated for a second and thought to myself… do I really need such a sauce? I could probably make one at home right? Could I? Maybe (?). Did I want to? No. It has been available at the Wychwood’s Evergreen Natural Foods (513 St Clair Ave) for a month or so, but of course – I nearly never go up there. Currently, it’s only at these two Evergreen locations, but the creator is aiming to branch out soon to other businesses. Today I bought all of the remaining jars at the location on Roncesvalles – sorry (not-sorry). But I’m sure it’ll get restocked soon. (P.S. sources tell me It’s been restocked already)

I’m happy I picked it up when I saw it, because it paired perfectly with the semi-fancy, but sort of lazy meal I wanted to make that night. Smoked marinated tempeh steaks, fried on a cast iron skillet, fettuccine pasta, and some roasted local asparagus. 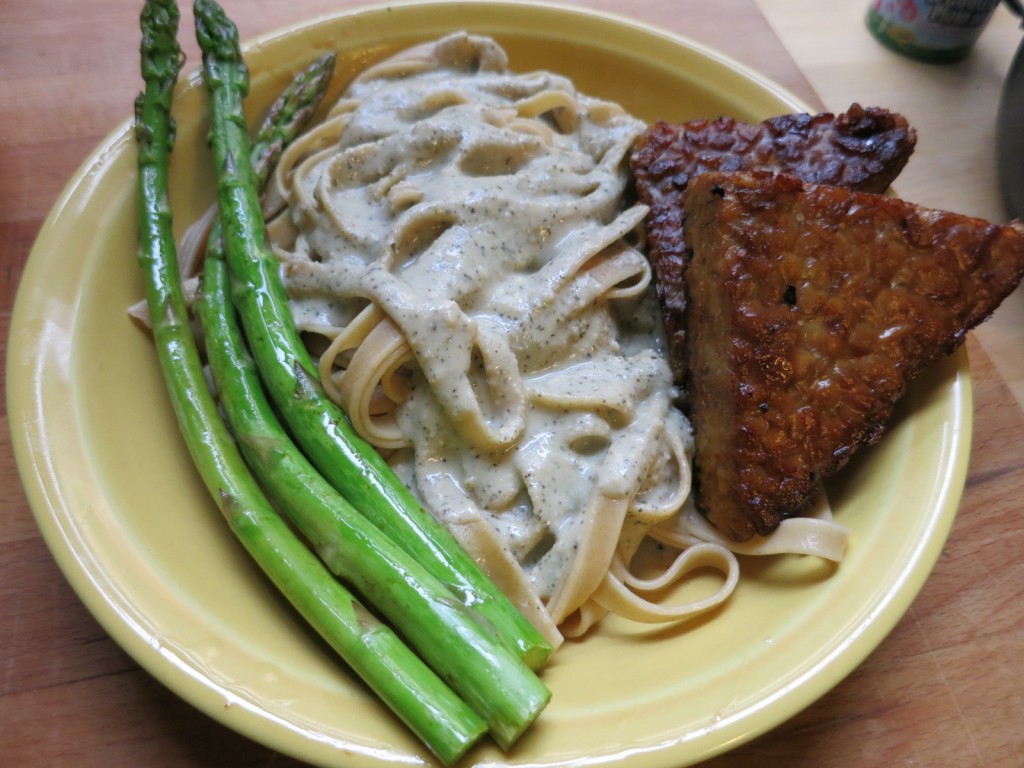 Eventually we also topped the asparagus with the sauce, but I could see it’s multiple potential uses as I “sampled” it out of the jar. It’s fine to have it hot or cold, so it’s good on pretty much anything that needs to be savory. Mashed potatoes. Broccoli. Salads. You want to savoury something up? This sauce makes that happen. I dipped kale in it. Also delicious.

Kailey (the owner/creator of Soul to Bowl), developed the recipe for the Creamy Vegan Alfredo with her late Italian mother after realizing that there was something missing from the vegan/alternative food world – vegan, soy-free, gluten-free prepared sauces. And while I’m not soy-free or gluten-free, I sure know a lot of people that are, and it’s nice to have a tasty prepared product to recommend.

I’m excited to try out some of the future potential incarnations of sauce – like a fully organic one, spicy, sweet potato, a fagioli, and a kids one, but for now, I’m quite happy to have a jar of this sauce in my fridge… just in case. Full disclosure: I’m eating it right now mixed with macaroni.

So try it out, and let me know if you agree!