It seems like only a week ago I was boiling in the Austin, Texas heat… probably because it was merely a week. How time flies by when you’ve got your head buried in a computer trying to get the final pieces together to launch a business. But more about that eventually.

As we were driving down to Niagara VegFest yesterday, JC put my coffee in a Vida Vegan Con One mug, and I got all nostalgic.

Heading to @niagaravegfest & feeling nostalgic about last weekend in Austin. This mug is from the very first @vidavegancon in pdx. The organizers really started something special with VVC, and I’m grateful to have been able to participate and to meet so many of you there. #vegan #vidavegancon

It’s been a weird week, but mostly a productive one, despite being in a travelling daze for a few of those days. Looking back at the weekend in Austin – I’d say it was something special. Especially after some time to decompress and reflect. Getting the opportunity to meet and talk to so many incredibly wonderful people in the real world is powerful. It’s so meaningful. I used to happily say I lived on the Internet, but as time has passed, I have to admit that while I live in both worlds simultaneously, I’m finding the real life connection and conversation thing to be just a bit more fulfilling.

I am so grateful to the organizers, who put their lives on hold for countless hours and days and months to put on this phenomenal event. And while I’m sad that it’s over, I understand. Putting on this event requires so much work – and all of these folks have jobs besides this convention.

On the first morning of the convention, I woke up bright and early (thanks to Central Time vs Eastern Time) and decided to walk. My hotel (the Rodeway Inn, just off I35) was within comfortable walking distance from the AT&T Convention Centre.  While it wasn’t a fancy place – it did the job. The rooms were clean, the shower worked, there was television, and it had an in room fridge and a microwave. Add to that, it was right next to an Ethiopian restaurant called Aster’s Ethiopian, that I regret not eating from. Next time perhaps.

A hot walk, brought me to the convention where kind folks signed me in, and gave me my badge. I made it. I made it in time for breakfast. Joy.

For me, a sure sign that I’m in a place that understands me – at least on some level – is one with at least one non-dairy milk option for coffee. And sure, it sounds absurd, but it is what it is. So imagine my delight at this sight: 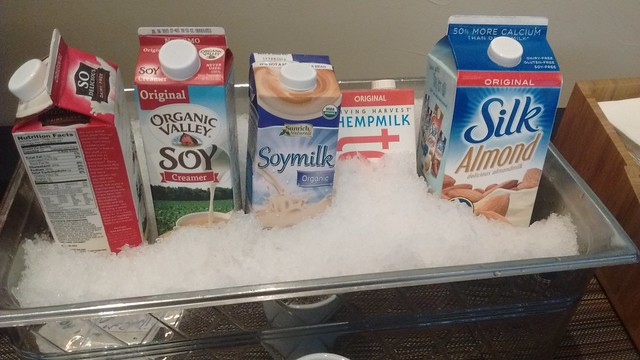 You’ve got your coconut, your soy creamer, regular soy, hemp milk, almond. I wanted to pretend complain about how some random obscure milk was missing, but was afraid that someone would take me seriously. This was awesome. And I drink my coffee black most of the time (by choice.)

We started our day off with breakfast tacos. Breakfast Tacos. There were so many options, corn tortillas, wheat tortillas, toast, a seemingly endless supply of avocados. I threw everything that spoke to me on a plate, and didn’t take a picture of it. But I did go back for more grapefruit juice, so much more grapefruit juice. With perfectly crushed ice.

The first talk I attended was Matt Rusigno’s “Science is Awesome:Why We Don’t Need to Exaggerate Health Claims About Veganism” talk, which spoke to me before I even attended because I have a science (biochemistry) background, and I’m really into rationally looking at studies and research. I’ve shared my notes from the talk, linked above, but it was also cool to find out a bit more about Matt and his projects – including Strongest Hearts which probably would have been a nice resource to have back when I was lifting heavy weights and not really finding a vegan-friendly community around it (though to be fair, I didn’t really look). 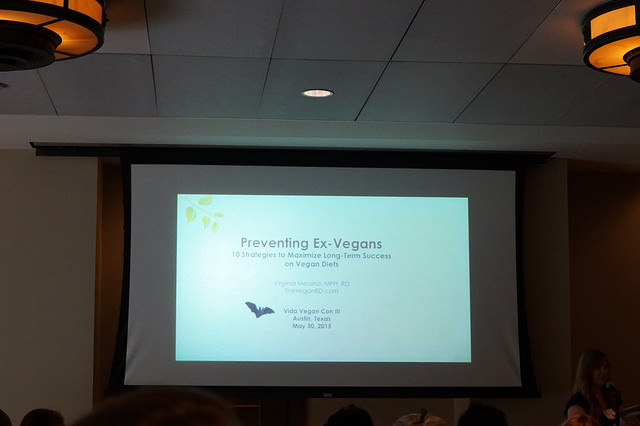 It was a great talk, and a conversation we need to have more of, especially the dangerous pseudo science I see flying through our communities. This conversation would tie together well with the final talk I saw on day one from Ginny Messina (aka The Vegan RD) on “Preventing Ex-Vegans: 10 Strategies to Maximize Long-Term Success on Vegan Diets.” Again, important stuff. I took some notes, which I’ve shared, but I want to highlight one of my favourite points:

The only guaranteed promise of a vegan diet is that it removes yourself from the direct exploitation of animals. Being vegan is about progress, not perfection. It’s about effort and intention.

I also wanted to encourage anyone that doesn’t have a community support system near them, to join places like the Post Punk Kitchen forums, or even just to just reach out to me online. I will never forget being the only vegan I knew – in Alberta, and in the late 90’s. It was weird to feel out of step with my family and the people around me. You are not alone though. Reach out. I’m still vegan. I’m still healthy. I’m still alive.

Another talk related to health I wanted to attend but didn’t was Sayward Rebhal’s “Facing Failing Health as a Vegan“, she has an eponymous blog post that I read with great interest, while I haven’t experienced any surprise health concerns following a vegan diet. Mostly, I’ve just been incredibly lucky, no matter what I’ve put my body through, I’ve been reasonably okay.

Unfortunately, I’ve known a one or two people that have gone back to eating meat because they weren’t finding solutions to their health issues and may not have had the time or inclination or ability. So regardless, read Sayward’s post, it’s essential reading if you want to support people in their ethical choices – and it’s a good reminder that it’s not always so easy for everyone (if it’s easy for you!) 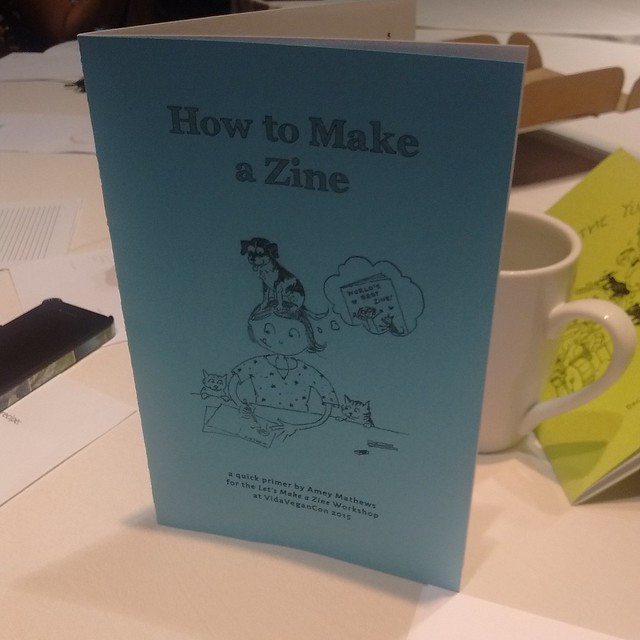 Finally – why did I miss Sayward’s talk? Well – I was in Amey Matthew’s (of Vegan Eats & Treats) Zine Making Workshop. And sure, I’ve made some zines in my day, but I couldn’t pass up the fun of doing it as a group.  The idea was everyone would make a page or two to add to the zine, and then Amey would arrange all the pages together, photocopy it and give us four copies of it all the next day. She was also kind enough to make us a zine on making zines. Metazine/Zineception whichever you prefer.

At some point in between all of these sessions there was lunch of Bowls a la PDX, and at the very end of the day – I picked up my grande bag of swag. So much awesome stuff, some of which I managed to take back home with me. 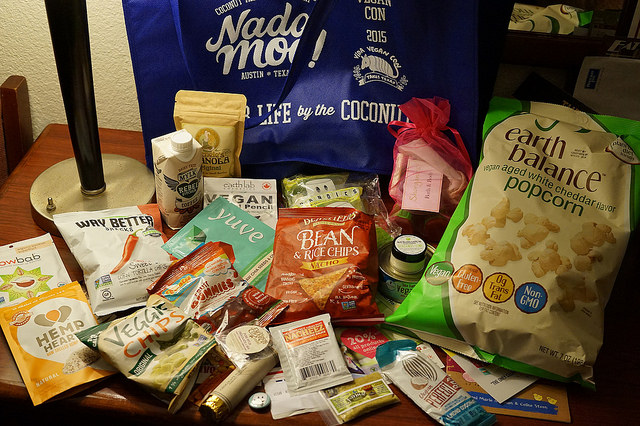 A few of my favourites:

More about the last few days in Austin soon!