I wanted to share some of my notes from day one of Vida Vegan Con and some of the talks I attended. On day one – I went to Matt Rusigno’s talk Science is Awesome! – Why we don’t need to exaggerate health claims about veganism. 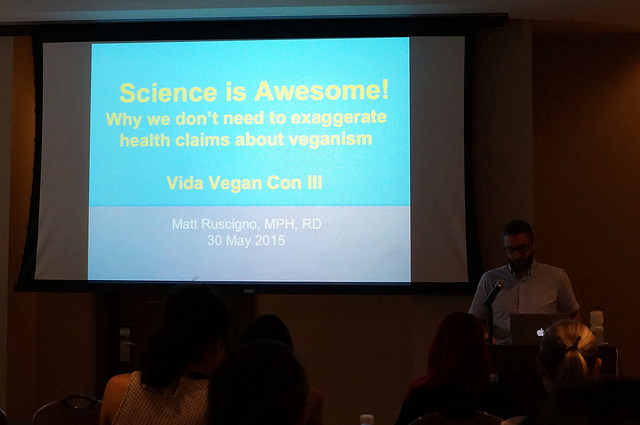 Matt Rusigno started off by telling us that with everything he says he’s coming from an ethical vegan perspective, but has concerns about  concerns about the positioning of veganism and ridiculous health claims, and will tell us a few things we might not agree with, but things that are based on the current available scientific evidence.

News articles about “How going vegan triggered this this instagram star’s orthorexia.” – negatively impacts us as a movement.

A vegan diet is adequate and there’s research that shows eating more plant foods may reduce your risk for some chronic diseases. But beyond that, statements can start reaching. (p.s. eat more Red Cabbage, Leafy Greens, Berries, Quinoa Lentils and Kale 😉 )