Whyte Ave is like Vancouver’s Commercial Drive, Toronto’s Queen Street (or maybe it’s The Danforth…), Calgary’s 17th Ave, or Saskatoon’s Broadway Avenue. Every city has that street, at least one, that you know as The Street (or Avenue) that people go for arts, foods, shopping, and assorted randomness. I can remember walking around on Whyte Ave with my mom when I was little, and then later when I was a punk in high school, and then later still when I just lived in the area. To this day, it’s still one of those places where vastly different groups can intermingle, sometimes with positive results, sometimes with not so positive results. 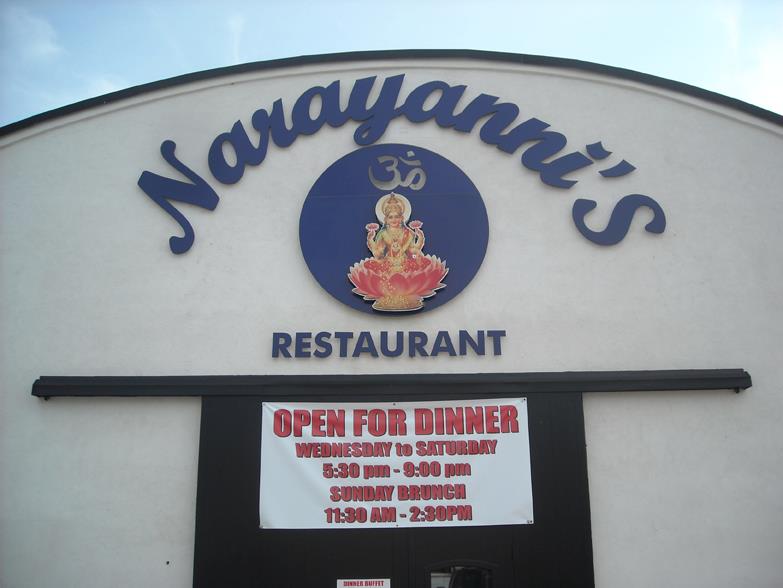 Narayanni’s Restaurant is tucked behind Whyte Avenue, so it’s got the benefit of being easy to get to by public transit (and still has parking) but it’s also off the busy street (parking!) We went to one of Narayanni’s special “Vegan Nights” which is going on every Tuesday during the month of May. It was a bargain at $15, and it sounds like they do a regular Vegan night every month (but they might do it more often if encouraged by attendance). Normally Narayanni’s is a vegan friendly, but not exclusively vegan, South African Indian restaurant. And run by the same folks that started Block 1912 cafe right on Whyte Ave. Narayanni’s, named after the owner’s granddaughter, has been open since 2010, and regularly offers a variety of vegan and gluten free items at their buffet.

The atmosphere is a blend of casual and upscale dining. There are booths and regular tables, we didn’t have reservations, so no booth for us. We underestimated how popular it would be, but we were nice and early, so it didn’t matter. Later on, the restaurant really filled up.

The buffet was served right in the center, with a variety of dishes like a cucumber vegan yogurt salad, soup, pakoras, papadams, breads, a pumpkin curry, dal, a tofu curry, cauliflower, more salads, more curries, and even more. and one of my favourite dishes of the night – a mildly sweet saffron rice pudding. The desserts alone were worth the visit, but all the savory spicy items were excellent as well.

I’ll spare you the pictures of my buffet plate, because while delicious, it’s not particularly pretty. But if you are curious about Narayanni’s and want the opportunity to try a large variety of their vegan dishes for a really reasonable price, check out vegan night Tuesdays!

Things to know: The restaurant is buffet only, and not always entirely vegan. So options vary, but you can check out a list of possibilities on their website.