I think the problem with reminiscing about these things a month later is that we went back several times, and part of me wants to go in order, and part of me doesn’t care. So I’m just going to put our visits together – we went to both Winnipeg Boon Burger locations (& eventually the new one in Barrie too, but I’ll save that for another post) and a great time was had by all.

The first Boon Burger we visited was the newest Winnipeg location on Bannatyne, and if you’re into The Guess Who, you might notice that one of their albums is named after this avenue (So Long, Bannatyne). It’s in an upscale, urban feeling place, and the restaurant is huge, spacious, with high ceilings and lots of beam and post, and beautiful solid wood. Plus booths! 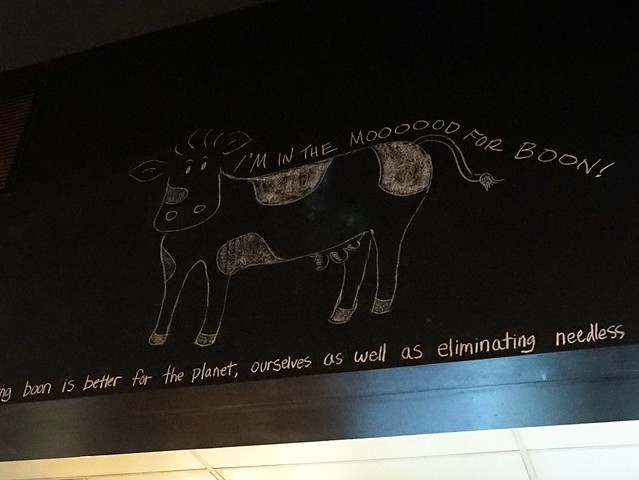 It’s incredible to me that Canada’s first all vegan burger place opened in Winnipeg, but like I said before, it’s a place where awesome things can happen.

You have a couple of options for ordering – Boon Burger has an app for iPhone and Android you can use to place to go or to stay orders (and get a discount), or you can talk to the friendly folks at the cash and order that way. Pick what you want, from their fabulous menu (pdf), pay, and you’ll get a plastic animal and a receipt to take to your table so they can find you, and bring out your order.

On our first visit I ordered the Reuban Rebel Burger (reubans are after-all my safety choice when I have no idea what to order – the menu is pretty interesting with lots of great sounding options) with a side of chili cheese fries. The thing that stuck out the most for me is that they bake all of their fries. No fryers at all. So as we sat there, we saw employees taking large baking sheets out of the massive stack of ovens, full of fries. 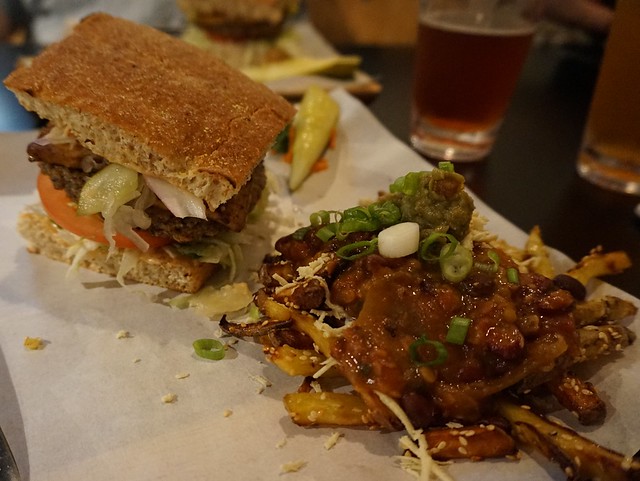 The reuban rebel burger has one of the grilled boon patties which is made in house with cremini mushrooms, brown rice, onion, garlic, lemon juice, tofu, oats, and spices. And of course, since this was a reuban, it had sauerkraut, pickles, and some mustard, but then it went all rebellious. There was a sweet(ish) sauce, “bacun”, tomatoes, and lettuce. I don’t know where red onions fit in reuban cannon, but it was pretty tasty all around. As I’d find out later (in Barrie…) – it wasn’t my favourite of the Boon Burgers, but it was still a solid option. I added hot sauce.

Chili fries were good, but I probably could have had more, but it was also probably good that I didn’t have anymore. The baked fries were not some standard boring frozen fry, but had a really interesting texture, like good convection oven potatoes do.

JC ordered the Bacun Cheeseburger, because when in vegan land why not go all out. This was also on the boon patty, and came with a slice of not-cheese and not-bacon. He also ordered the side poutine, which I didn’t eat nearly enough of. But probably more than enough of. 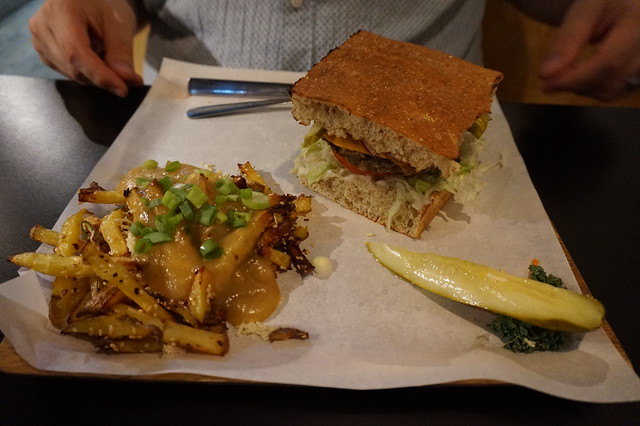 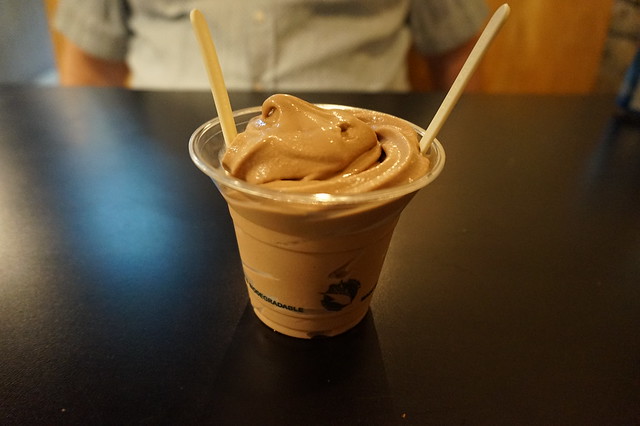 Which of course was a good idea. When in doubt – vegan soft serve. As an added bonus, Boon burger has Zevia Cola (which just happens to be my favourite cola.)

We had a great time just hanging around at the Bannatyne location, there was someone inexplicably wearing a tuxedo, and everyone seemed to know who he was, but I resisted the urge to ask someone who he was. I figured I’d rather remember him as the tuxedo guy. I was right, the mere knowledge that there is someone out there that will go to a vegan burger place in a tuxedo makes me happy. 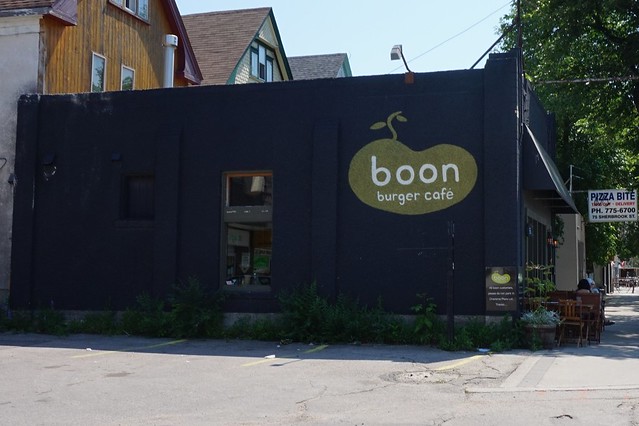 The other boon burger location is set up a little differently, and judging by what we saw in Barrie, they’ve decided that their Bannatyne location will serve as the model of what future franchises will look like, because the one on Sherbrooke was smaller, and set up a little more compactly – with family style seating and a couple of long tables.

I had the baja burger because beside it on the menu it had “Back by Popular Demand” – so I felt pretty confident that it wouldn’t be terrible. It was good! And kind of weird. Don’t get me wrong, it wasn’t weird in a bad way, I just hadn’t really associate pineapples and burgers together, but that’s a mistake. They make an excellent pair. The Baja burger is a grilled mushroom patty with “bermuda sauce”, some vegan cheese, and pieces of pineapple. (I don’t know what the bermuda sauce is, but I added some hot sauce.) 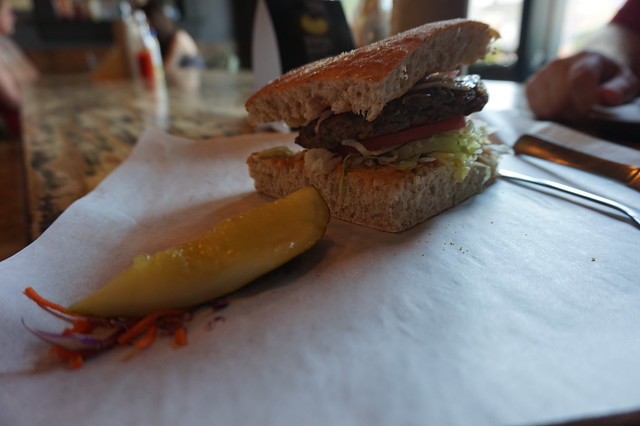 And the Sherwood Boon Burger location is where we saw this amazing poster: 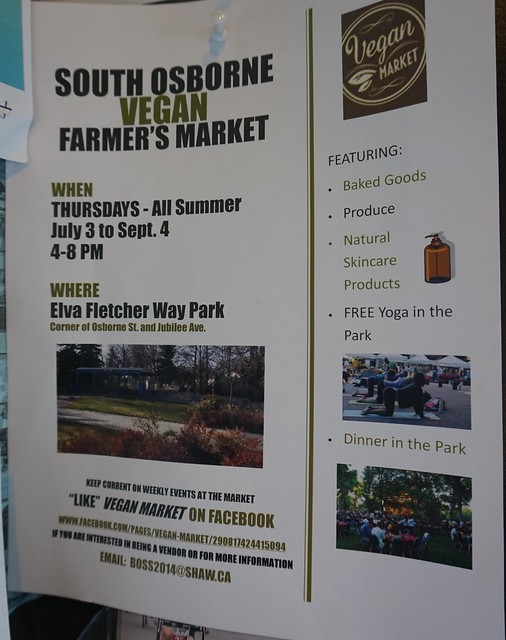 This summer Winnipeg had a totally Vegan Market once a week, which I think is incredibly awesome. Hopefully they’re able to do it again next year! We were totally slacking with the Toronto Vegan Pop Up. Sorry (it’ll be back though!)