The Terrace Point Cafe was one of the places we had wanted to check out on our last visit to Las Vegas, after reading about it on Epicurious Vegan but it wasn’t open, since it is mostly outdoors, and it was chilly in December. This time, the weather was perfect bordering on the usual` Las Vegas oppressively high & dry summer temperatures.

The first thing I noticed when I walked in – the pink polyester uniforms all the servers and hostesses were wearing. Why are they wearing these things? They look heavy, multi-layered, and uncomfortable, and everyone was wearing a thick hose which I can only assume is also company standard. It’s hot out. I hope it’s not as terrible to wear as it looks.

From the moment we walked in, everyone was extremely friendly – this seems to be the experience we’ve encountered at nearly every Wynn hotel. Staff is mostly great and willing to answer questions, or offer help if you look lost or confused.

There is seating inside if you prefer to take advantage of their air conditioning, but we asked to sit outside under one of the misting umbrellas. It was a little less than a 15 minute wait, but I’m glad we opted for the Luckily there were four of us, and even better, three of those were vegans (including me, so I got to take a look at a nice variety of dishes.

As an appetizer we started with the guacamole and chips. It was okay, tasty, but we probably could have skipped 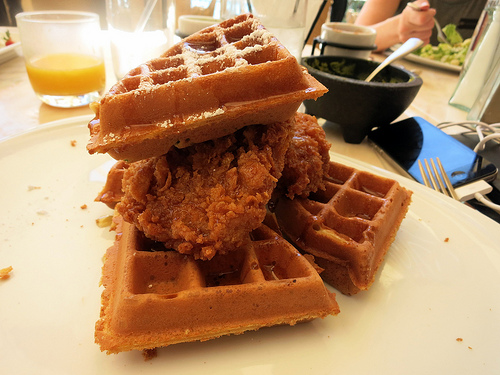 I had the Chick’n & Waffles which has somewhat become a dish I order whenever I see it available vegan. It came with two dishes of maple syrup, one of those was spicy, but I didn’t find that out until after I finished my meal with the mild one. The gardein chick’n cutlet was breaded, and southern fried, and the waffles were crispy but light on the inside.

This looked a bit daunting on the menu, but I’m glad I ordered it since it really was delicious. JC had the Tempeh Tuna Salad Sandwich, and he loved it. I had a bite, and it’s interesting what a difference the tempeh can make. Having made Not-Tuna Salad sandwiches before, but with thawed frozen tofu, I think I’ll try making it with tempeh next time. Really interesting texture. Another great option. One of our friends ordered the Peanut Butter & Jelly Pillow, which sounds amazing right? Well, it is exactly as described on menu. It’s a very expensive peanut butter and jelly sandwich, with the crusts cut off, and edges pressed and toasted. Which – still – is good, but I’m not sure I would pay 18 dollars for it if we find ourselves at the Terrace Point Cafe again. Of course, as usual, there was a little bit of room for dessert, so JC and I shared a banana split. With brownie, a caramelized banana, in-house created ice cream, and covered in caramel. Before ordering we weren’t sure if this dish was vegan. Since the menu says “vegetarian” and that word can pretty much mean anything now (queue “back in my day” speech), but the server let us know it was dairy-free.

Generally, vegan ice cream is usually a good idea. I haven’t tasted bad ice cream in years, this was no exception. I love that they make it themselves too.

Ultimately, the service was great, food was tasty, and the atmosphere was lovely. It’s a nice spot for the summer.