We followed up our helicopter tour with a visit to the Wynn’s Wazuzu on a spur of the moment decision to have the coach bus take us to the Wynn instead of back off strip to the Rio (where we were all staying for Defcon).

Wazuzu will live on in my mind as the first “secret vegan menu” I ever asked for in 2010. It fully started a series of events that would have me asking questions of restaurant I never would have expected to be full of options. We started with a variety of Dim Sum options and sushi. I really enjoyed the Shiitake-Naki Sushi that I stole from JC, but didn’t get any photos of it. It’s a sushi roll with roasted seasoned shiitake mushrooms drizzled with a sweet vegan eel sauce. 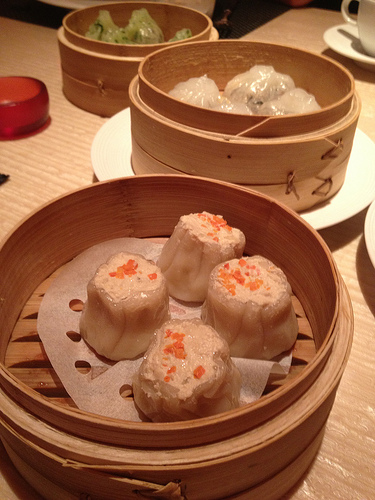 You can see a few of the other dim sum pieces we ordered, but in focus is the Gardein Chick’n Shu Mai. It was interesting, but I’m not sure it was my favourite. It has a unique texture and flavour, but feels like it could have been more (soy sauce & hot sauce helped tremendously…) I really liked these. They were filled with spinach and shiitake mushrooms. We ended up with two orders of these because they contained secret onions that one of our dining companions doesn’t like.  Though I suspect it was just the garlic. In addition to garlic these were stuffed with hearts of palm, corn, and ginger. This was JC’s dish and also one of the first dishes I ordered on my initial Wazuzu visit. It was saucy, and nicely spiced. The saucy fried tofu is an especially great part of this dish. Vegan Pad Thai…. I just can’t quit you. It was on the dry side, but the noodles were delicious, especially after I emptied out the little spice dish on top of everything.

There were four of us at dinner, but we still ended up taking leftovers back to the hotel afterwards. You might want to pace yourself. I think next time I head over to Wazuzu, I’d opt for just a few of the interesting dim sum options. They’re worth trying at least once, especially if you don’t have vegetarian dim sum in your area (which – lucky us – we do, but it’s still nice to try.)