We checked out The Steady last weekend after a pal mentioned they did a good vegan-friendly brunch. It’s not an exclusively vegan spot, but it was nice to check it out for a change, and rumour has it, is run (owned?) by a former Hogtown Vegan chef, so I had some faith in the vegan options. 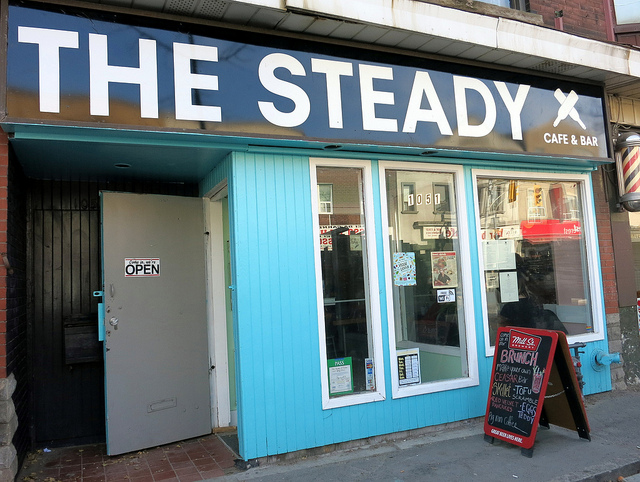 When we walked in, the front section was full except for a table for two – perfect. There is tonnes of natural light, and it’s very light blue. We were immediately offered lattes or an americano which was exactly what I wanted at that moment. Coffee. Glorious fancy coffee. They have soy milk. They do charge extra (.50) for it.

When JC & I looked at the menu one thing jumped out at me immediately – the cornbread waffle stuffed with greens (I love both cornbread and collard greens), so I ordered it, but unfortunately it turned out to not be vegan. I appreciated the server letting me know, and also appreciated watching him scratch off the little “V”s that had previously been beside the item on the menu. So really, in spite of my disappointment, the experience was positive. (and also inspired me to look for cornbread waffles to make at home and I found a recipe in Vegan Brunch.)

Instead, I ended up ordering the Tofu Scramble, which I was ambivalent about (tofu scrambles can be so hit or miss), but it turned out to be lovely. Spiced, seasoned, and full of spinach and tomato, it was probably one of the better tofu scrambles I’ve had outside of my house. It also came with a fluffy (vegan) biscuit. JC had his usual Tofu Benedict. Though The Steady does it in a unique way to every vegan benedict we’ve tried thus far. It looked and tasted like they actually poach the tofu. It’s shaped in an eggy fashion, and covered with a delicate hollandaise sauce. Comes with greens and a side of fruit. I thought the service was awesome, the food was good, and the ambiance was bright. Bloorcourt/Bloordale is certainly springing up with so many exciting vegan options all over the place. The Steady is also conveniently located within walking distance to Through Being Cool, where we picked up treats for the rest of the day.

Other things to know: