D-Beatstro is a community space, art gallery, cafe, event venue, and restaurant that opened a little over a year ago in the old Bike Pirates space. It’s has a relaxed friendly atmosphere, and a nice addition to Bloordale, and right across the street from the magical Through Being Cool Vegan Bakery. They have prioritized being both physically and financially accessible, especially for people throwing events. Which speaking as someone that likes to organize the occasional event – physically accessible event venues are something that are sorely lacking in our city. 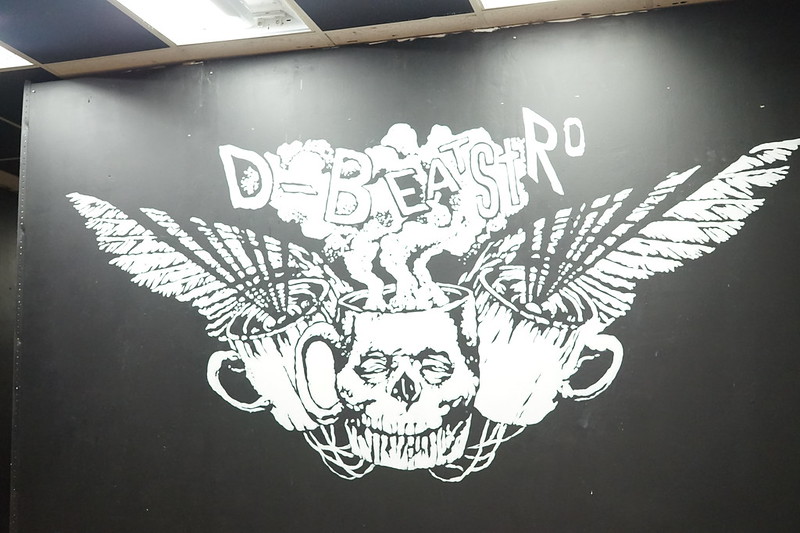 I’ve watched D-Beatstro improve and grow their offerings and options over the last few months and it’s been great to see them grow into having a really solid menu, kitchen, and coffee set up. As with any business, the beginning can be tough, and when you hit the ground running like these folks did and make improvements on the fly in that DIY style (and if not, you will likely fail) it can be stressful and not without hiccups.

This community space, cafe, restaurant, and more, has managed to do that, and excel at it.  I mention this especially if you visited them in the absolute beginning, and didn’t go back – simply to encourage you to visit again. 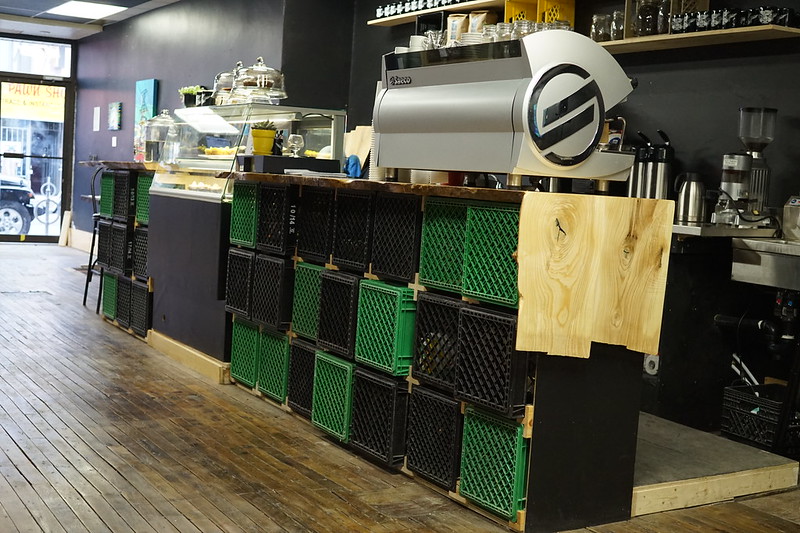 That said, from the very beginning, they started out with great coffee (it’s from Dark City if you’re curious) – they knew what they were doing with that fancy espresso machine, and it was great to be able to go in there with my laptop and take advantage of their free wifi (and drink a good cup of coffee), but it’s only gotten better from there. 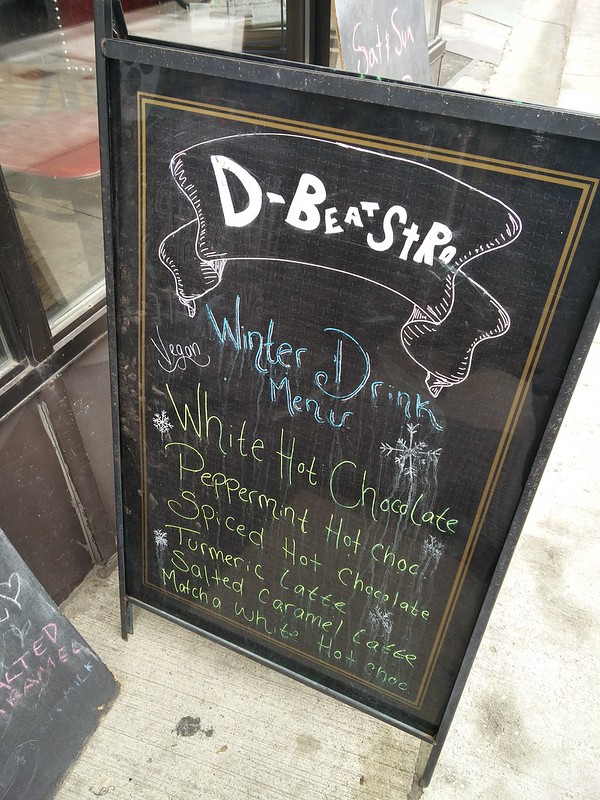 D-Beatstro has a nice variety of baked goods on the daily, and also often have gluten-free options too for those of you that need/want them. In addition to the usual coffee options you might find (like lattes, cappuccinos, americanos) they also have herbalist blended teas, and sometimes even other fun drinks like white hot chocolate, matcha lattes, and other surprises (often written on the sandwich board outside.) What I really want to mention is the brunch. Because I was so pleasantly surprised, we had to go back again the next day for more. It’s good. Really good.

It ranks way up there for the best brunch in the area (other options include Disgraceland, The Steady, Hogtown Vegan, aka an area spoiled for choices) their menu has a nice variety and includes gluten free options if that’s something you’re into. 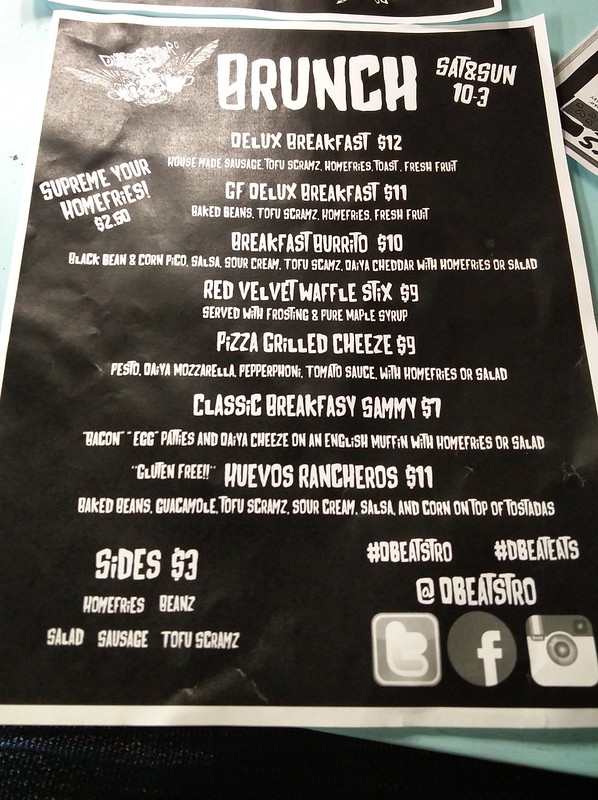 So far I have not diversified my Brunch orders, but I have my eye on breakfast sammy for next time. I’ve ordered the Deluxe Brunch every time (so far). The only variation so far has been supreming my homefries by accident the last time I was there. 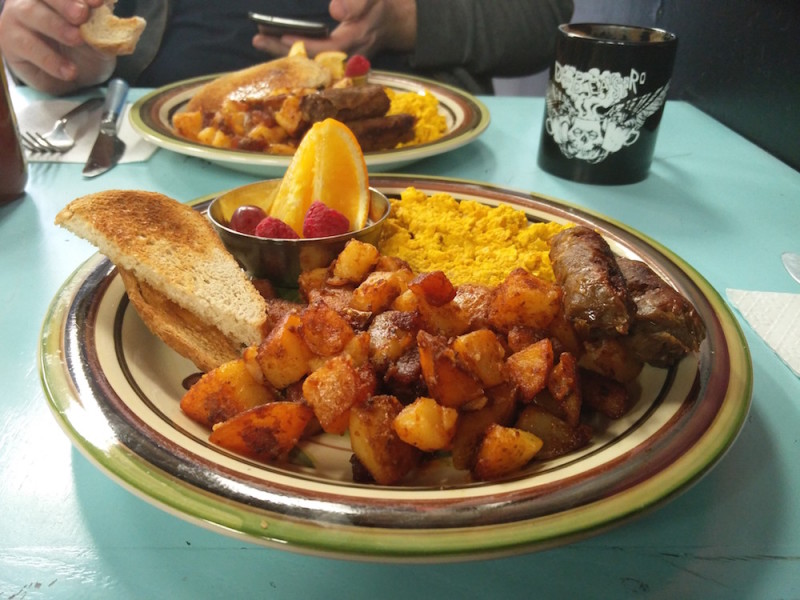 They make their own gluten-y sausages in house, and they have a nice texture, not too dense, not too soft. The tofu scramble varies, but I liked it a lot the first time around, and appreciate that they don’t put garbage fruit like cantaloupe in their fruit bowl so I can enjoy it (since I’m allergic to cantaloupe and think it’s the worst) so far it’s always been some kind of berry, citrus, and grapes which is a nice sweet touch. 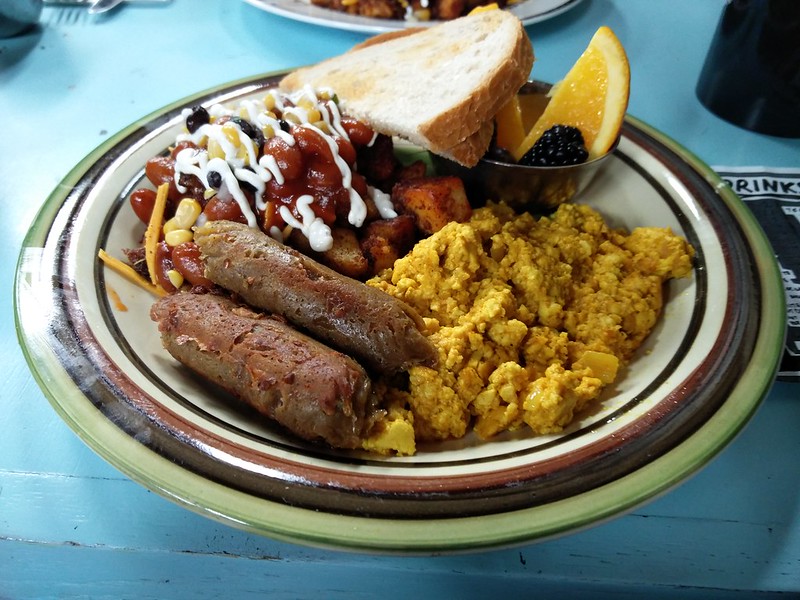 The supreme your home fries thing involves putting burrito toppings (daiya, baked beans, corn, sour cream) on the diced roasted potatoes, which sounds amazing, but I didn’t like as much as JC did.

JC has been slightly more adventurous, ordering the deluxe brunch with me the first time, but he ordered the Pizza Grilled Cheese on our most recent visit. I stole a bite and if you’re even remotely a fan of pesto – you probably want to give this a try. 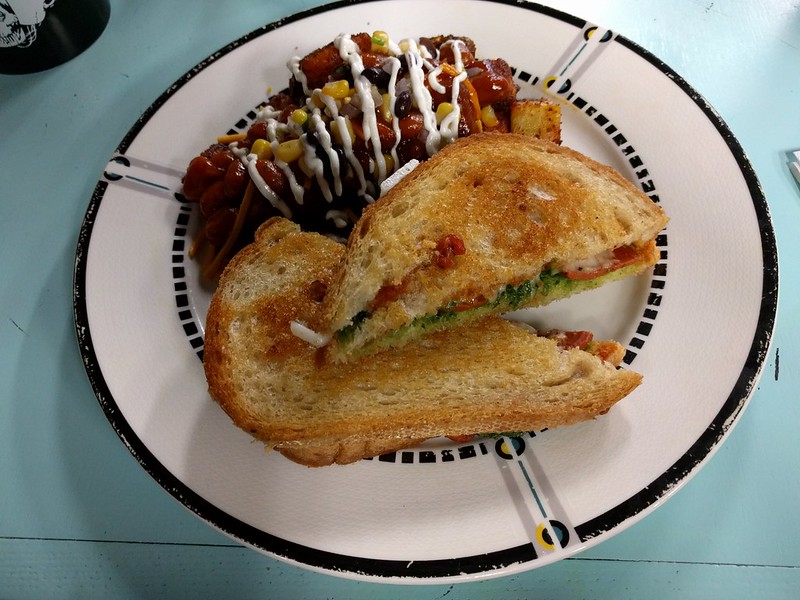 But of course, on our first visit we had to try out their red velvet waffle sticks for brunch dessert, and it was a great decision. 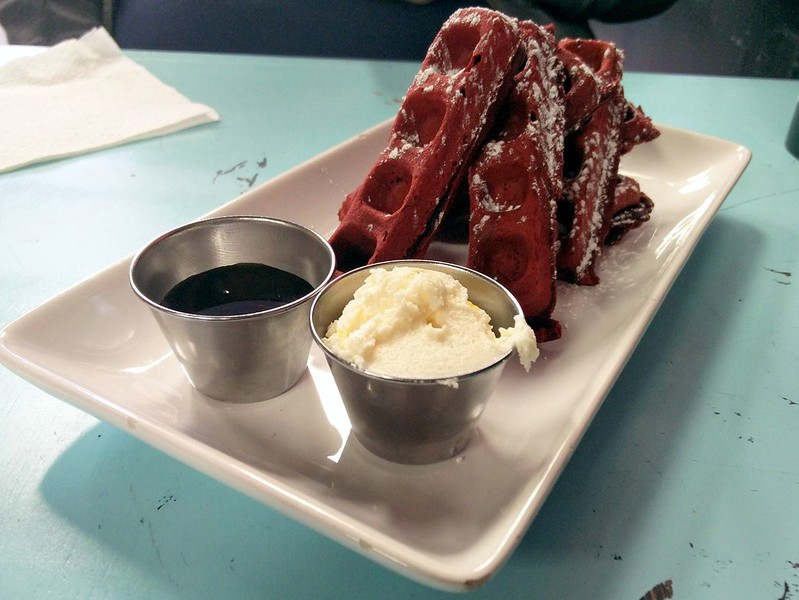 Seating is comfortable and well spaced out, so if you’re tired of sharing elbow room with other folks during weekend brunches – this might be a great spot to check out. The restaurant and cafe is also wheelchair and/or mobility device accessible with a ramp outside, with an accessible washroom in the back.

They take credit, debit, and cash. Check out some of their upcoming events on facebook