We ordered a box from The Purple Carrot earlier last week. I’ve been curious about it, because despite a genuine love of food – I’m a lazy cook, or just an avoidant cook. Anything that proposes an option for us to have an easier time cooking dinner at home is something I’m interested in learning more about.

One of their biggest name supporters and co-founders is Mark Bittman, and he’s also involved with recipe development, recipe testing, and also using his connections with fancy chefs all over the world to create or share interesting plant based recipes with subscribers. Currently, the box is only available in the USA.

There were some rumors of a vegan meal kit in Ontario brewing last year, and I’m happy to say details have finally been released. (Update: 2021-08-11: Globally Local closed their produce delivery service in 2017 and became a fast food truck then restaurant. Now they’re known as Odd Burger, and traded on the TSX.)

So what was in the box?

What was on the dinner menu for the next few evenings?

I’m going to post a picture of each kit, the ingredients, and the final dish, and some comments. One thing you’ll notice is that each ingredient is in a separate plastic bag, and as I took everything out of the box, that’s something that I started to wonder about – is there a better way to package one meal kit without expediting spoilage or confusing people less experienced in the kitchen? I couldn’t think of one.

It includes all the ingredients needed to make the dish (except for salt, pepper, and oil) and has a detailed recipe with photos of each of the steps. Each meal is contained in one bag.

You can find the recipe here. 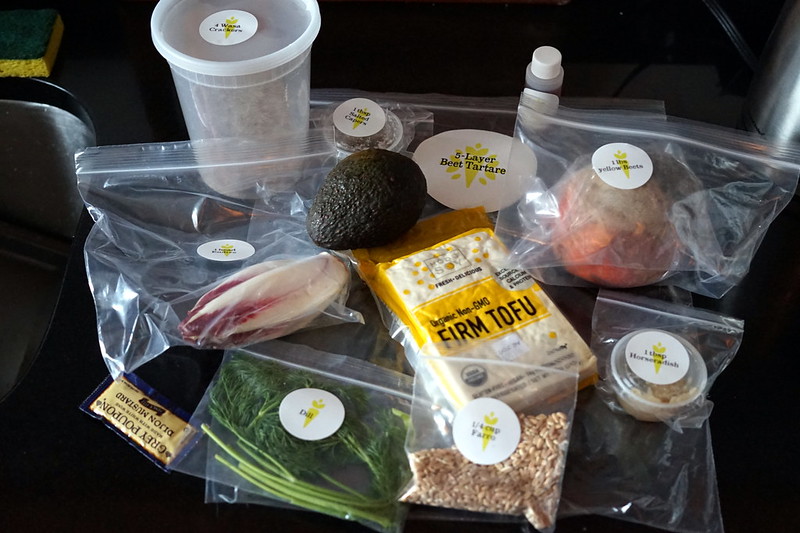 I made this one first. Reading through the recipe shortly before preparing the dish I was sad to see I needed either a food processor or a grater for the big yellow beet. If I was at home, this dish would have taken a lot less time, but the friend’s place we were borrowing doesn’t have as many kitchen gadgets as we do. But that probably allowed for a more accurate review experience. 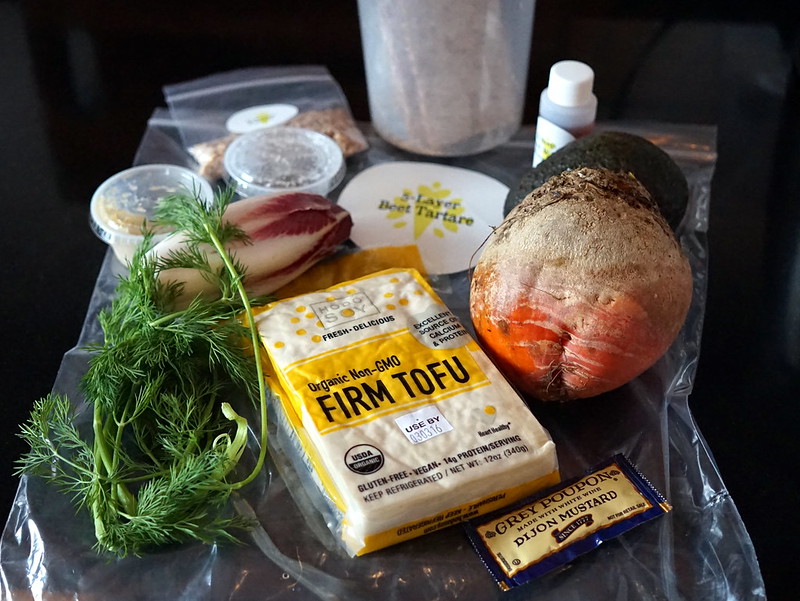 The order came with a big beautiful yellow beet, sprigs of dill, capers, beet, avocado, red wine vinegar in a tiny bottle, minced horseradish, endive, wasa crackers, farrow, and hodo soy tofu (of Chipotle sofritas fame.) There was no cooking involved in this dish, just a lot of grating, chopping, mashing, and mixing. 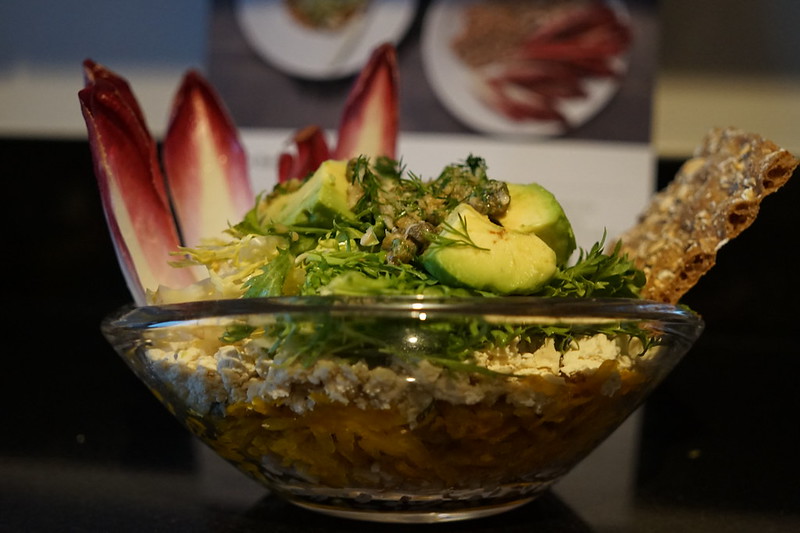 With this dish, I ate frisee (it also often goes by the name curly lettuce – you can see it on the very top with the avocado) for the first time, and it was okay, but I’m not much for greens.

You can find the recipe here. 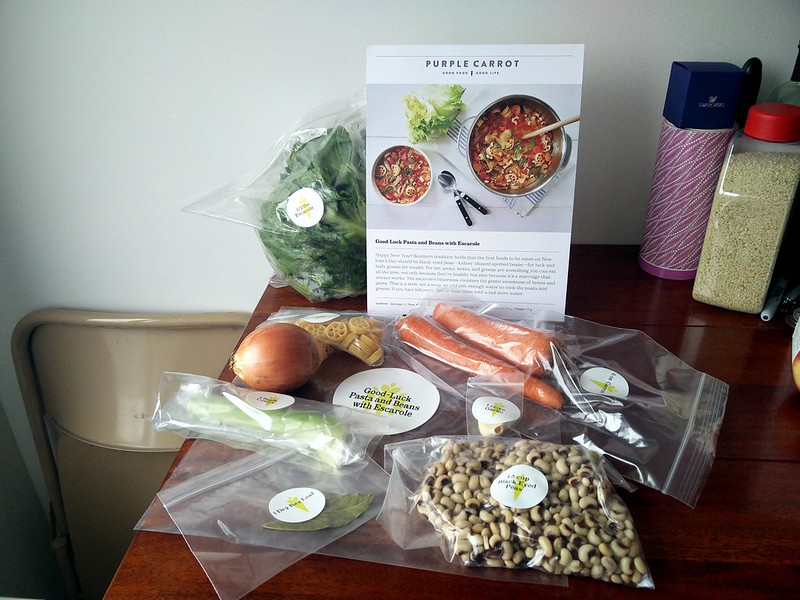 I was looking forward to making this one on New Years Day. Seems it’s Southern tradition to cook up some black-eyed peas for luck and leafy greens for wealth. I don’t know about luck or wealth, but it was delicious and fun to prepare (and of course easy.) I did a lot of chopping, but besides that the recipe amounted to throwing things into a pot at the right time and leaving it all alone for a while. 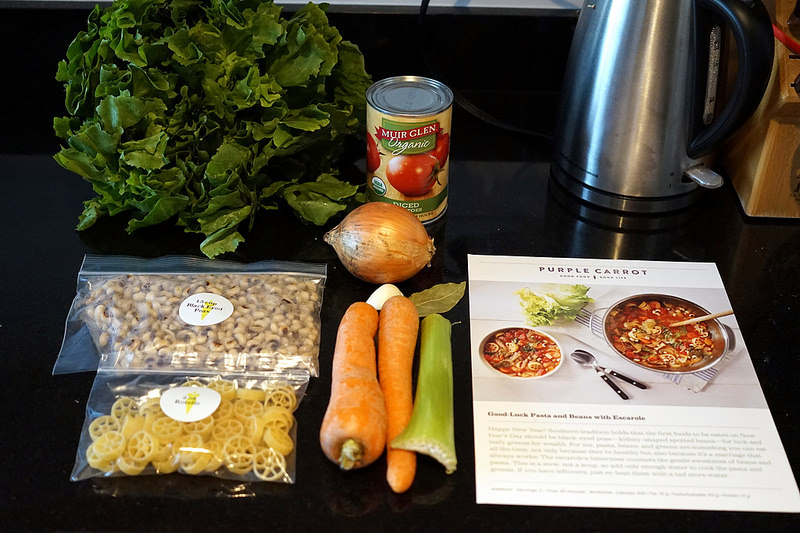 The end result was a hearty stew with a great combination of textures and flavours. The escarole’s slight bitterness balanced the sweetness of the tomatoes and carrots in the dish and played well together. 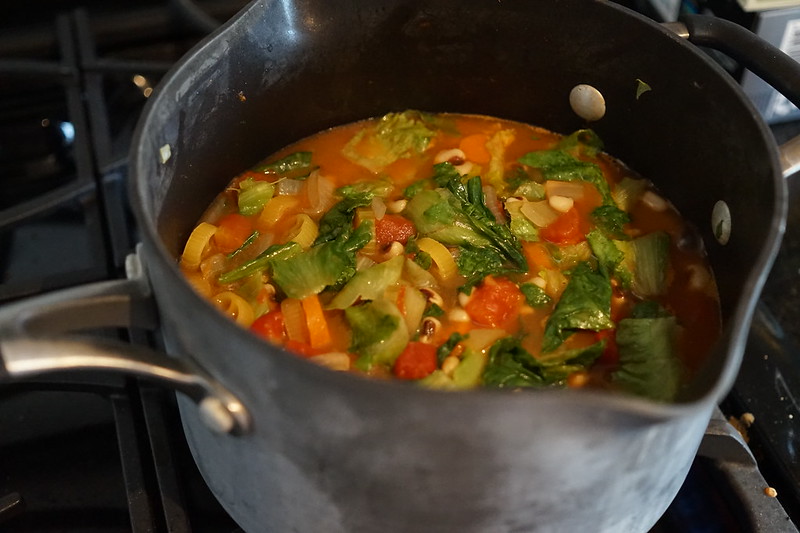 As far as I can recall, I’ve never eaten Escarole before. It looks like lettuce, but has denser leaves. What I thought was very cool about this meal kit was that it came with fresh black eyed peas.

You can find the recipe here 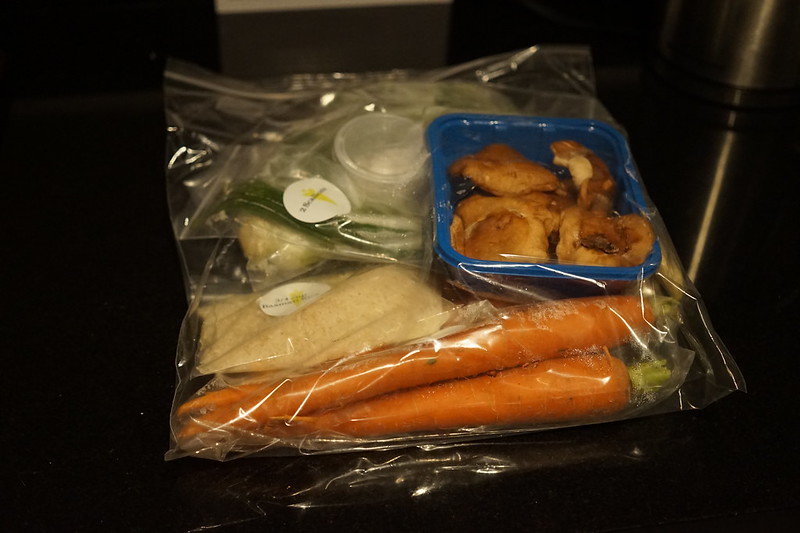 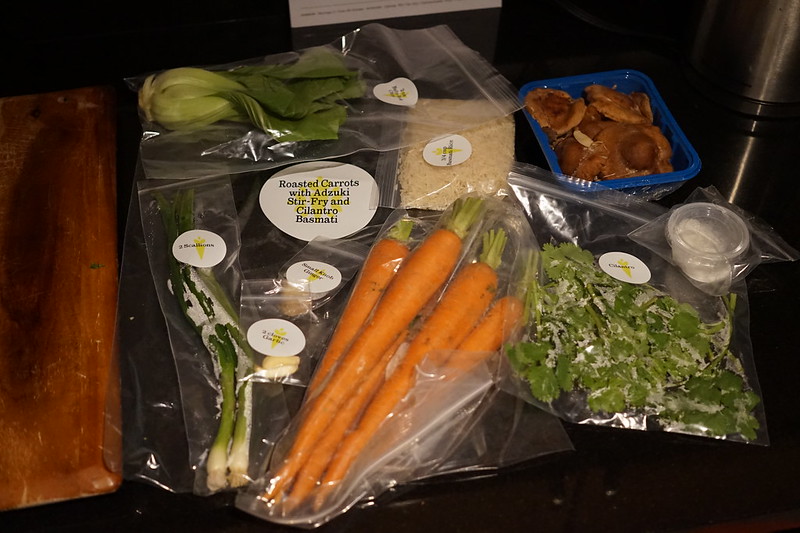 I guess I saved the best for last, but this was my favourite of the three dishes. The recipe flowed together well, the instructions were clear, and the resulting dish was flavourful and colourful. 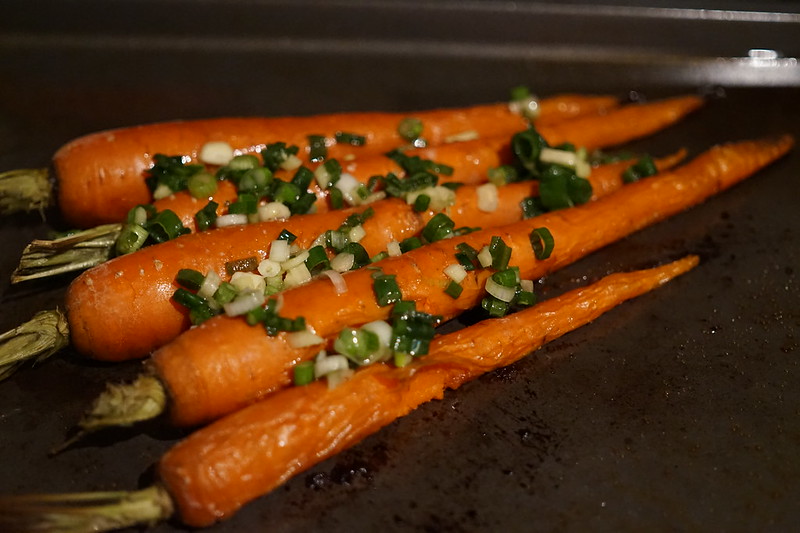 The carrots roasted beautifully, and the late addition of the seasoning mixture of chopped ginger, garlic, oil, and scallions was a nice touch – I have the erroneous tendency of just throwing everything in the oven, which has worked out fine. But the inevitable result of this is I end up with charred herbs on whatever I was roasting. But following this method, I had tender roasted carrots, that still had a nice seasoned flavour, without the burnt bits. 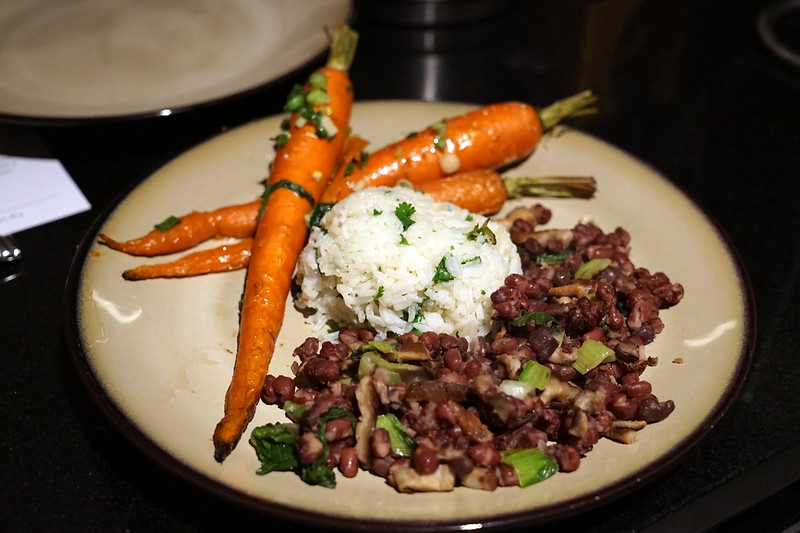 The only disappointment with this pack was the Eden Foods can of beans, since I don’t want anything to do with that company, and haven’t bought anything from them in years. (for the reasons why, you can read an overview here), but otherwise, the recipe was great, I’d make it again, just with a different brand of adzuki beans. But if Purple Carrot has partnered with Eden foods over the long term, it would be a factor that would dissuade me from using their service in the future.

People have commented and complained to me about the amount of packaging used in the Purple Carrot order – there are a lot of plastic bags involved. With each ingredient enclosed in a plastic bag, if I was at home with this, I would have been in a better position to reuse all of the bags (because the variety would have been perfect to have on hand at home or even at our store), but unfortunately we ended up recycling most of them .

Still wondering if there is a better way to make this all come together. Especially for people that might not be familiar with every vegetable and ingredient – I think it’s likely beneficial to have each vegetable labelled in some way. I’m still vacillating on this point, but apparently they’re working on improving the packaging issue in the future.

Generally our experience with the Purple Carrot was good – I liked having produce available that I could use to make fresh food at home, without having to plan it out or go out and buy it. Most recipes used up most of the ingredients so there wasn’t much wasted and recipes were straightforward, clearly explained and illustrated, and tasty.