I’m still travelling back in time on our Summer Roadtrip, in July and August 2014. We visited UFondue in the last few weeks of July 2014, and it was one of the last few spots we visited before driving on to Edmonton. 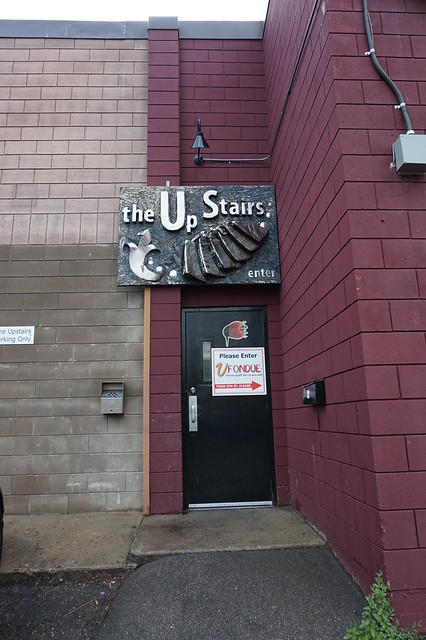 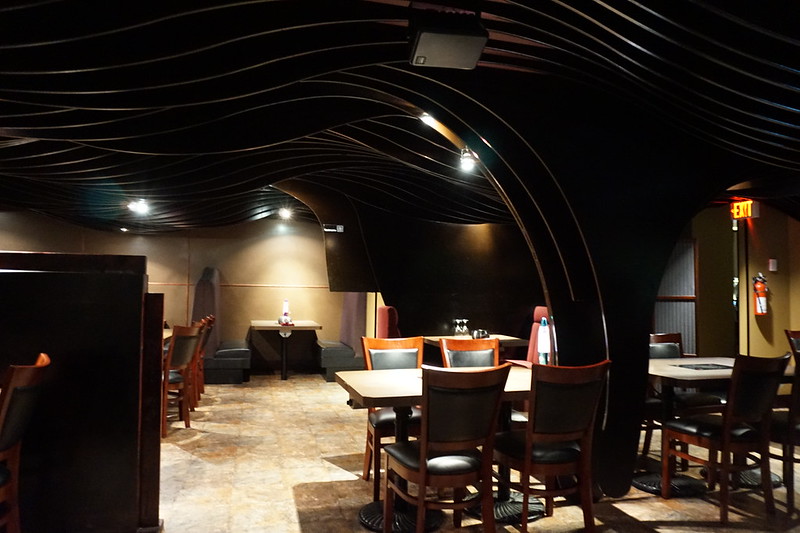 I’ve gone here for fondue a few times now, and every time feels like we’re an anomaly and it feels kind of like there is an odd vibe around it, but they keep it on the menu so I have to assume I’m not the only one ordering it. Servers try not to be awkward about it, but they are awkward about it every time. Despite this, I had to go back with JC and show him this weird and wonderful experience that inspired me and an ex-gf to buy a fondue set once upon a time (that we actually even used several times afterwards too!)

Way back when I lived in Saskatoon, UFondue was known as The Upstairs, but they’ve since changed the name and the interior. I like the changes –  it feels a lot more open, and takes advantage of the available natural light. JC and I sat in one of the booths, with a window view of 8th Street, and there was still sun peaking out. When I talk about things I miss about Saskatoon – sunshine till super late in the day is one of them (something Toronto doesn’t have, even on the “longest day of the year.”)

And we were one of the last seatings of the evening, and it’s not a fast process, so you have to budget for a few hours if you’re doing the full four courses of fondue (which if you’re doing fondue – I highly recommend!) 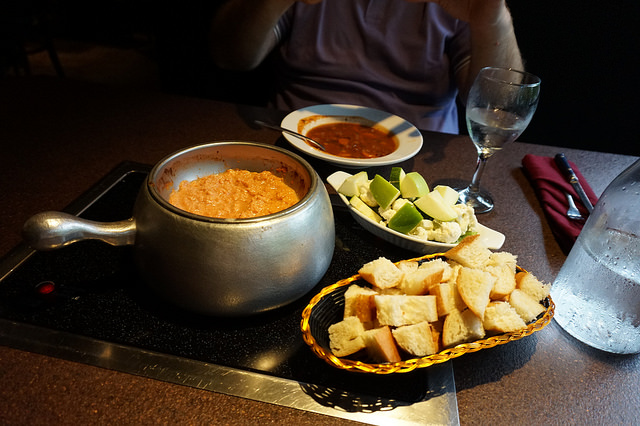 First we started with the soup, which was a good starter, and it was reasonably hearty, but what was especially exciting was the cheese course that came along shortly afterwards. The vegan cheese option is a soy based creamy tomato flavoured vegan cheese, with that we got bread, fruit, cauliflower and roasted potatoes to dip in the warm melty cheese. 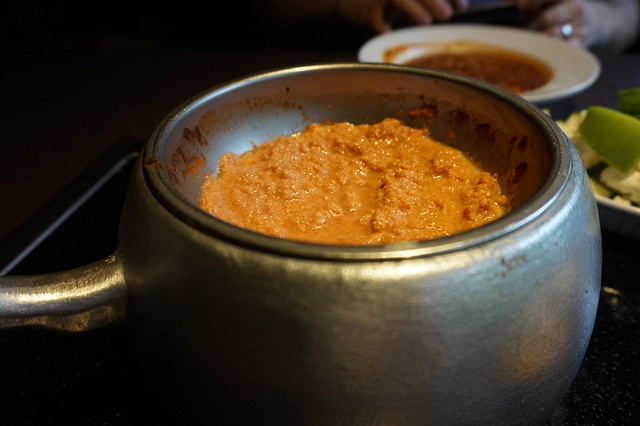 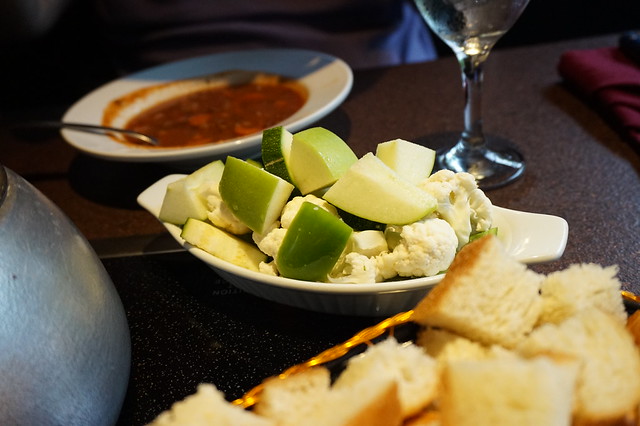 Next step was a pot of hot oil & vegan batter – veggies (mushrooms, carrots, broccoli, onions),  and two different kinds of soyameat balls, tofu. We had a lot of fun with the batter – making onion rings, battered broccoli skewers and more. This course also came with a variety of dipping sauces as well, so it was fun to mix and switch things around. They brought us extra batter – we were keen, and it was great. 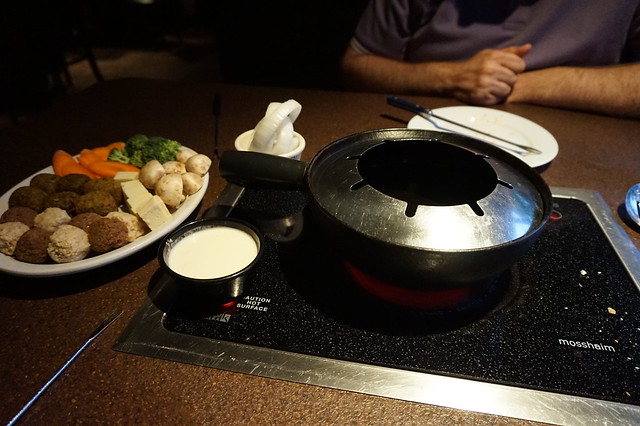 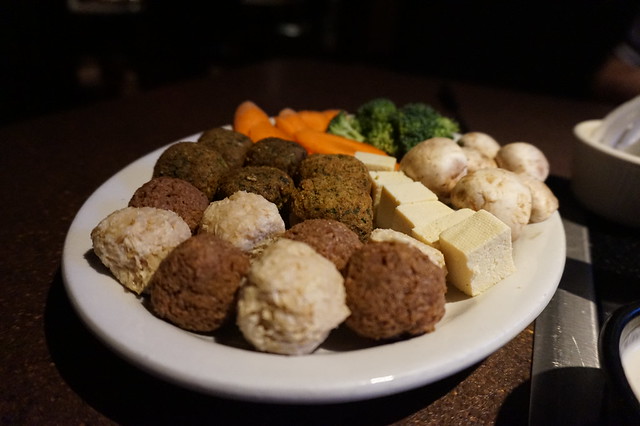 And when we finished the third course – it was time for arguably the most exciting course of all – the chocolate fondue course. Yes, they’ve got dairy-free vegan chocolate. Our chocolate fondue came with assorted fruits and pretzels. 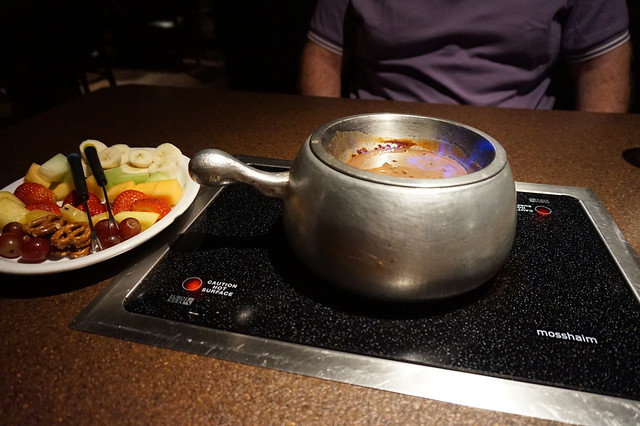 Our server was SO Excited to light it on fire – and we were so excited to see it on fire. 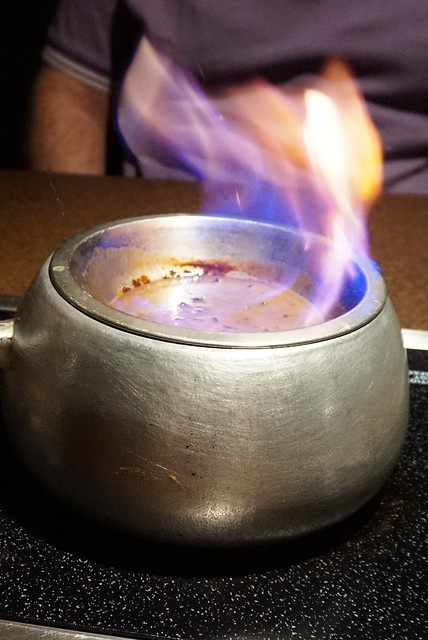 Then of course, it was time to start dipping. As you might expect, dipping bananas and strawberries in hot chocolate was quite lovely, and the chocolate was smooth and rich. 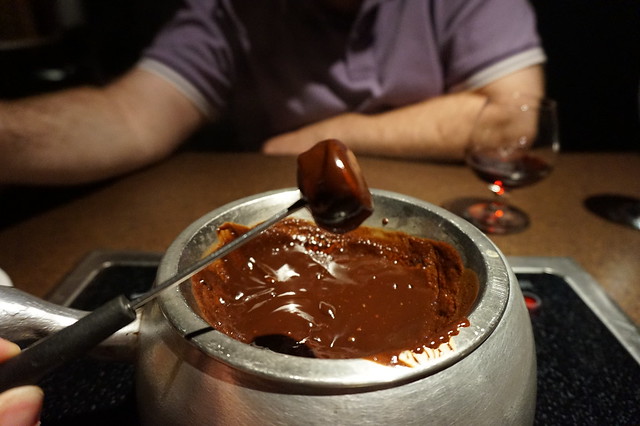 It’s certainly an experience and after a few hours of enjoying ourselves, we closed the place out. Our server did not rush us at any point (though I start to get nervous about keeping people past closing – they seem to have a casual approach to it, hopefully that doesn’t negatively impact the people that work there.)

If I still lived in Saskatoon, I could still see myself visiting this place a few times a year, just because it’s such a unique opportunity and great for extended conversation. But don’t go if you’re in a time crunch, because this is best enjoyed slowly.

Accessibility: It’s up a bank of stairs.