Well, Vegan MoFo is over, and I started writing a goodbye post on October 31st… but then Halloween got in the way. What I wanted to say is how much fun I had, and most of all, how much I appreciated discovering so many new people most of which I’ve added to my RSS feed and great recipes which inspired me and helped me make great meals and snacks in October.

This week I’m sick with a cold so after yesterday’s day of no appetite, I’m thinking of the various potential comfort foods that I could make myself (and inevitably, for my partner for when he starts feeling sick too.)  My favourite thing when I’m sick is hot and sour soup and a nice cozy blanket. I’ve been lucky because I’ve lived near places that have vegan hot and sour soup, like at Oriental Veggie House or Padmanadi in Edmonton or the giant “small” bowls at Greens Vegetarian in Toronto. But today I decided to make my own. Recently I acquired The Vegan Slow Cooker from Kathy Hester, after finding her blog as a result of VeganMoFo. Conveniently she has a great and simple recipe for hot and sour soup (on her blog and a slightly different version in the book). It’s nice to have such a simple and straightforward collection of recipes that are made for the slow cooker, complete with pre preparation instructions (for the night before) and helpful tips, I’m definitely a fan of the format and the recipes I’ve seen so far.

It was a great resource when I was throwing my soup together this morning. Rather than use a store bought chili paste, I made one this morning from fresh chili’s we picked up from a visit to the St. Lawrence Farmers Market  last weekend. I added more crushed ginger and used “black fungus” from T&T instead of shiitake mushrooms, and used a bit more water than the original recipe calls for, but otherwise tried to follow it faithfully. The end result was so great, it made a great hearty comforting lunch. Other things I loved this week:
– Seeing the Opera Atelier performance of  Don Giovanni at the Elgin Theatre. I’m a huge opera fan, so seeing this at the Elgin was perfect. When I first visited this venue during TIFF, I thought “this would be a great venue for an opera”, and it was. I’d love to see another one, especially with Peggy Kriha Dye (who played Donna Elvira in Don Giovanni) because she has an absolutely beautiful voice.

– Leveraging the magic of twitter to hassle fellow vegans about recipes and bread making advice. After making a successful series of round braided challah for Rosh Hashanah, I started thinking about baking more bread at home. After happily discovering Willie’s blog Until We Eat Again during VeganMofo, I noticed he was a huge fan of bread and baking and making it awesome. So who better to ask? He recommended The Bread Bakers Apprentice by Peter Reinhart and I’ve been enjoying it immensely so far. This beer bread from Willie looks great. – The science of bread making. Bread making isn’t a simple experience, it takes time and patience (unless you’re using a bread machine) and then more time and patience. You have to follow recipes, and those recipes have to be good, and they have to take into account flour differences and humidity or at least they should (or the bread maker should). As I was measuring out exactly 1.00kg of flour, I realized… I felt like I was back in the lab doing an experiment. Which made me start searching for bread science related books. I found one that especially piqued my interest, maybe with the sense that I had found a kindred spirit, with Bread Science : the Chemistry and Craft of Making Bread, written by Emily Beuhler. Emily received her PhD in chemistry, and shortly after began baking bread professionally at a cooperative natural food store and teaching bread making classes. Ordering the book seems a bit cumbersome, but maybe I’ll get around to it someday (Hopefully it will appear in an electronic format.)

– Baked Pumpkin. We picked up two pumpkins from the farmers market last weekend, one for eating and one for carving. I threw the eating on the oven, with a bit of water and olive oil, and just let it slowly bake for a few hours. Yum.

– The (mostly) adorable costumed kids that came to our door this year on Halloween. My favourite was probably the shy little skunk. Next year I’d like to take advantage of Sweets From the Earth’s prepackaged Halloween cookies as treats (if they’re doing it). It sounds like they do it every year, but don’t advertise it very widely. I was also prepared for Trick or Eater’s with extra canned food but we didn’t have any of those visitors. Maybe next year? 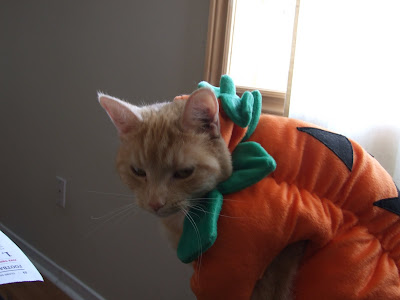