So, as of last Thursday, I was obsessed with making Samosa Soup from Yup, it’s Vegan. But we were away in Washington DC, and Baltimore for ExpoEast, and I didn’t have access to a kitchen, but the day we got back I had to make Samosa Soup.

The air in Toronto is still reasonably warm but it also has that distinct taste of autumn wafting around. The leaves were green last week, and now they are dramatic reds and golds (though there is still a lot of green left too), so a hearty spicy potato soup seemed like the perfect thing to make and eat and share.

The problem with me and recipes, is that unless I’m testing recipes for someone’s upcoming cookbook, I don’t follow the recipe. I look at it, and I’m inspired by flavours or techniques, but otherwise, I change nearly everything, and go my own way. This one was pretty inspiring, so I went with it.

My version turned into more of a one-pot-meal (+ 1 bowl.)

First I fried up onions, leeks, garlic & spices (turmeric, guaram masala, coriander) in a large pot with a splash of olive oil, then set them aside together in a bowl.

Next was the potatoes, I took about a dozen quartered potatoes in the same large pot with a few chillies, and whatever spices remained, then blended it all together with an immersion blender, returned the spiced onion leek mixture, added a few dried curry leaves, poured in two cups of frozen peas, and a drained can of chickpeas and let it slowly cook into something I felt like eating.

I added some sriracha and some apricot chutney I had in my pantry from last year’s West End Food Co-op community canning/community orchard program (which, if you’re a Toronto local – there is still a bit of room left for the fall session of it this year.) 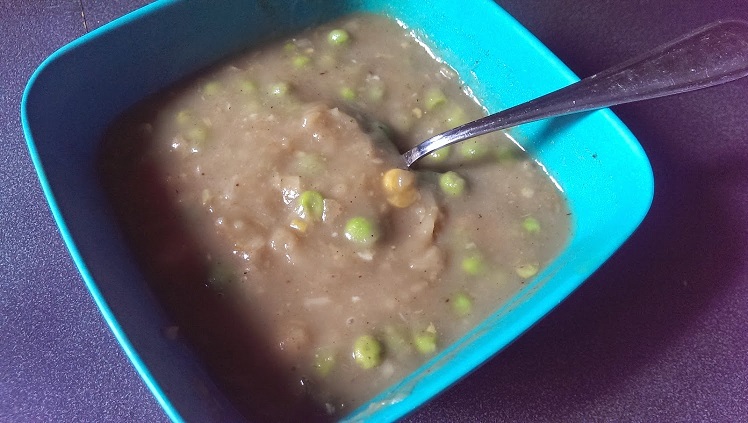 And it turned out great if I do say so myself. But I took only terrible photos of it, so let’s pretend that it looks like the delicious one on Yup, it’s Vegan‘s post. I’m still sharing a picture for posterity. The nice thing about making a bunch of soup is being able to share it with friends, so I managed to feed JC & I a couple of bowls, and give away two more jars of it to a friend.

This is also why I don’t have many recipes on this blog, and why my VeganMoFo’s end up being lists of things to do in other cities, information on how to have a vegan wedding, and my current faltering attempts at writing out our amazing experience road tripping across the continent this summer. I throw things in a pot and hope for the best.