For the last few months I’ve been waffling about going to Vida Vegan Con in Austin, Texas. JC and I have been working on a business, and everything was coming together for a launch right around the end of May/beginning of June. That’s all still true and we are still launching a business very soon, but after that happens, I’m sort of hopeful that I’ll be too busy to travel. We’ll see!

After expressing my fear of missing out on the final VVC festivities, and watching me plan out a variety of different convoluted and increasingly ridiculous ways of getting to and staying in Austin, and probably some what in response to trying to cheer me up about our foster cat Martha, my sweet human encouraged me to go, and I literally booked the plane ticket the day before leaving. And the hotel gods inexplicably smiled upon me with a room, in not so expensive hotel, within walking distance to the conference center. I wish JC could have come with me, but he’s holding down the fort and doing some business stuff.

Yesterday morning, after somewhere under an hour of sleep, JC dropped me off at the airport, and I entered the second longest customs line I’ve been in thus far. But somehow it moved much quicker than expected. I flew in on Delta, which has biscoff cookies, and power napped against the wall between Toronto and Atlanta. Highlights of the Atlanta airport – I was rushing off to my terminal (I got out at E, and needed to be in A) but this cat sculpture (called “Kitty”) from Mary Engel stopped me in my tracks. 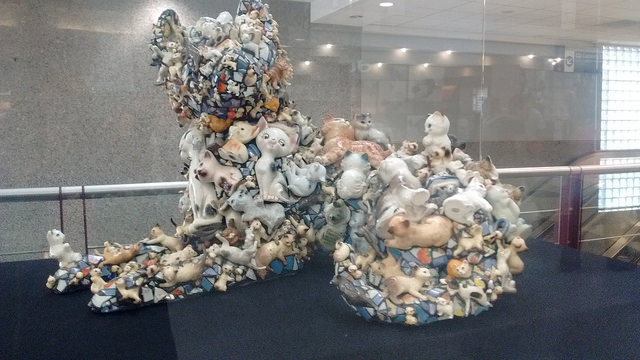 Day one was the Vegan Bazaar, and conference attendees were treated to a pre-market mixer by Miyoko’s Kitchen. Of course. I wasn’t there. In a momentary lapse of judgment, I clicked on the event address on Facebook, and my phone is not awesome, and things don’t always work in the wonderful and expected way technology often allows for. Unfortunately that took me to the other side of town. About an hour and a half away from where I actually wanted to be. Whoops.

On the bright side, because of this extreme detour, I met one of the funniest Austin bus drivers – who I would see a few times over the weekend, and we laughed at me and the extent to which I had trouble figuring my way around the city (because he got to see evidence of it twice on Friday.) Eventually, I made it to the Marchesa Hall and Theatre, ran into friends, wandered around, and finally left and dropped off all my luggage and took a shower (because I was gross. Sorry to everyone I ran into before then…) 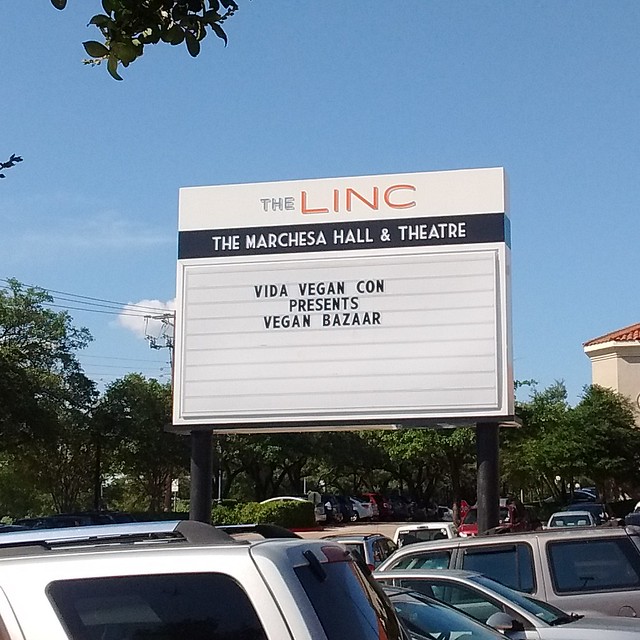 Afterwards I popped over to Wheatsville, a great vegan-friendly food co-op with a couple of locations in Austin to stock up on some snacks where I found Malk (yes, with vitamin R) – which is an “artisanal” pecan or almond milk and I had to pick the one with maple (since Canada) and pecans (since pecans!) It’s got a really pleasant flavour, and delightful branding. We might not see it in Canada anytime soon, because they’re local to Austin – and just appearing in Whole Foods locations in the area, but I dig it. 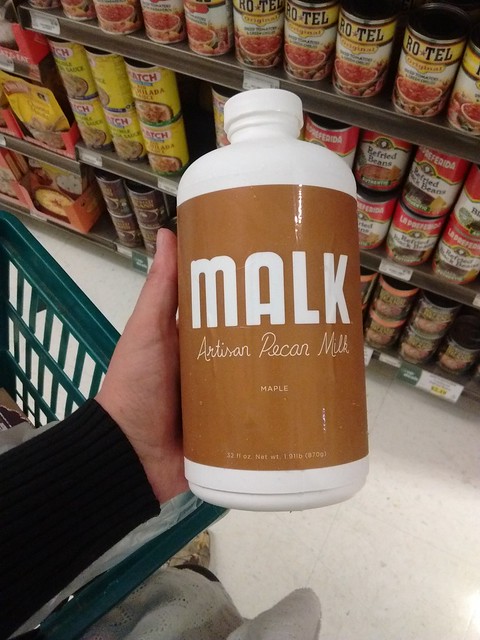 And a few other treats I was curious about or wanted to stock in my hotel room for the weekend (but lets be real – basically mostly Zevia and habanero chips.)

Today at Vida Vegan Con – I had a bunch of fun, ate delicious food (breakfast taco bar and deconstructed bowls for lunch), and attended some fantastic sessions, which were mostly focused on evidence based science AND making a zine with Amey from Vegan Eats and Treats. I took a bunch of notes at my sessions today, so I’ll post them after I’ve gotten a chance to correct any typos.

If you’re at Vida Vegan Con & reading this – please feel free to say hi! Heck, say hi to everyone. We’re all sort of milling about, but I’ve been making the attempt to say hi to at least a few people I don’t recognize at the conference but I know it can be tough. 🙂