One of the first things that came to mind after I had the opportunity to be in New York for a week last month was ordering a box of Miyoko’s Kitchen artisanal vegan cheeses. Since they don’t (and still don’t) ship to Canada, I’ve been watching people’s unboxing photos with a huge amount of envy, and a touch of heartache. We have a US mailbox, and it briefly crossed my mind to send an order there, but it’s “perishable” so that makes things a bit more complicated. Plus the 2-3 hour drive time to Niagara Falls, plus customs, plus, plus, etc. 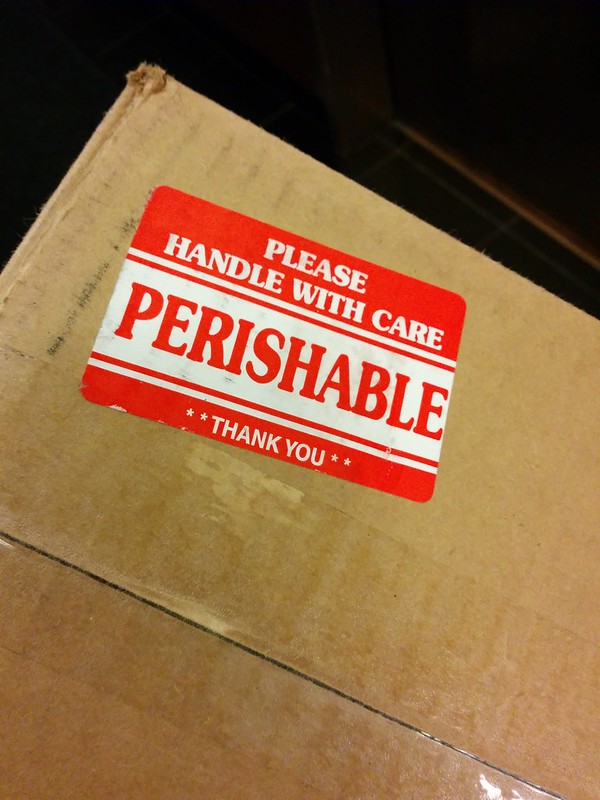 The doorman at the NYC apartment I was staying at also mentioned they normally don’t accept packages marked as perishable either, so I was glad they did this time (especially since it was the day before American Thanksgiving, and picking up a package that day would have been impossible.)

I ordered the “Party Platter” which has the largest assortment of Miyoko’s Kitchen cheeses containing:

What can I say that hasn’t already been said? This was one of the most exciting deliveries I’ve gotten in a long time, so I was already primed to love everything. I was never a fancy dairy cheese person, though I imagine I would have been had I not gone vegan well before the age of “wine and cheese parties.” So while I have no point of reference on whether these compare in any way to the non-vegan varieties, I don’t think it matters. I know a good flavour when I taste one, and these are all really incredible. If I gave star ratings it would be a 5/5, maybe a 6/5.

Having been one of those folks that bought Miyoko’s Artisanal Vegan Cheeses book, filled with wonderful intentions of making all the artisanal vegan cheeses myself, and then never making any, I think this product is especially ideal for people like me.  I’m not a cheese maker. It just didn’t happen, but I so coveted the beautiful wedges I saw people making, and how lovely they said they were, but I didn’t want to go through the process of creating them myself. Et voila, Mikoyo’s Kitchen saves the day. 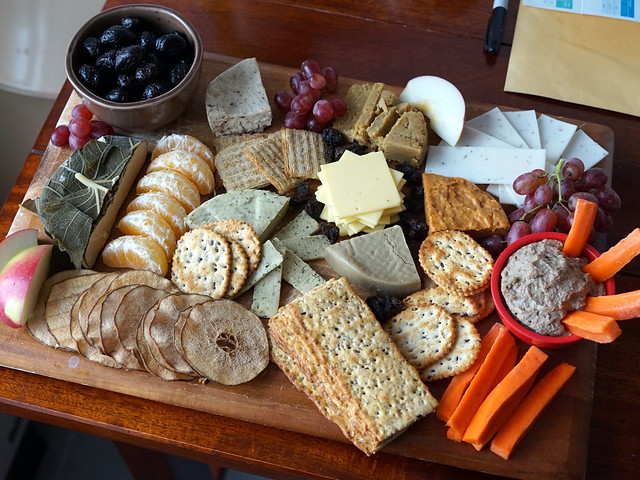 While I don’t make artisanal vegan cheese, I can put together a mighty find cheese plate (if I say so myself), so off to the Westerly Market and Whole Foods I went to pick up a few more things for the board, so if you’re looking for ideas, here is what’s on this one: 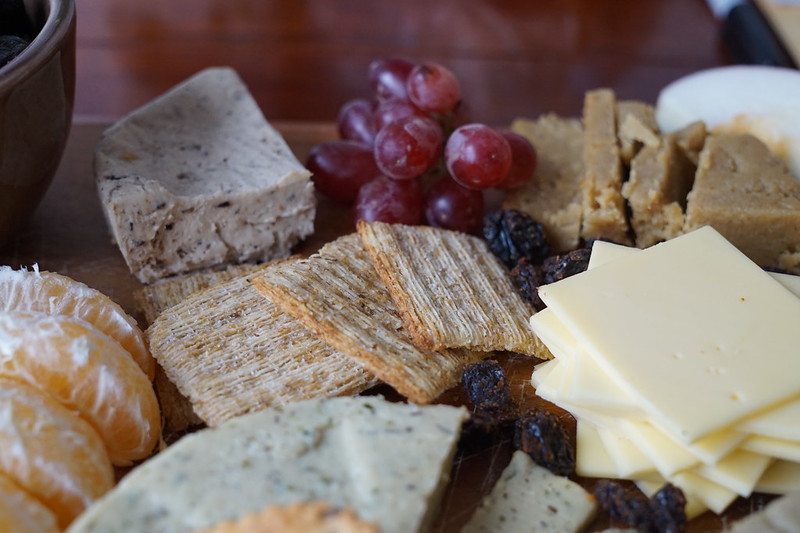 Some other things: The Chao Cheeses were definitely a more casual cheese (as JC very aptly put it) but paired wonderfully with the apple slices, drawing upon nostalgic apple cheddar cheese plates my parents made for me when I was a little girl. I feel okay saying I prefer them to the daiya slices, and hope they make their way up to Canada at some point despite the current Field Roast CFIA standoff. 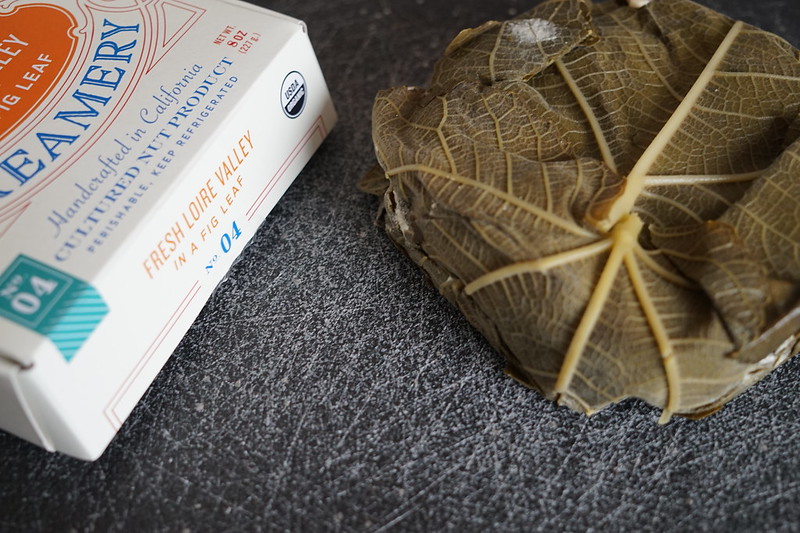 My favourite was the Fresh Loire Valley in a Fig Leaf – I ate it with the leaf intact. Strong sharp flavours in a soft and aromatic cheese. After some time on the board it became more spreadable on crackers, but still kept its shape fairly well regardless. 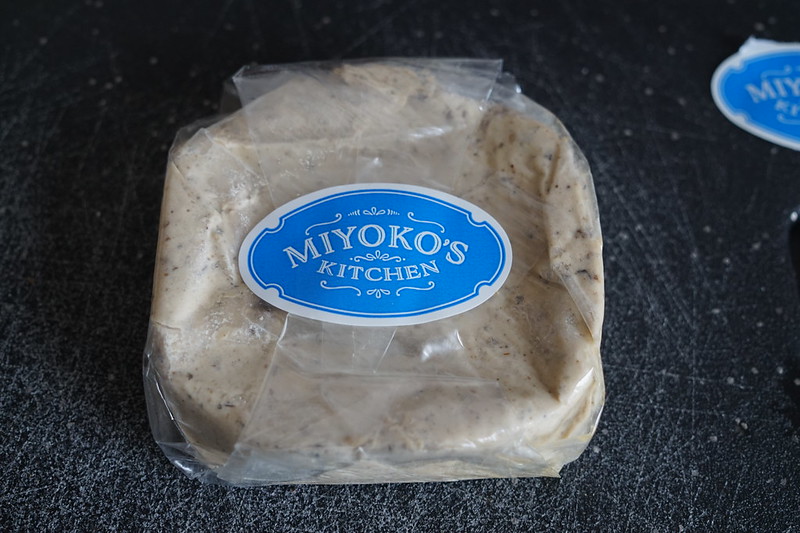 JC’s favourite was the French Style Winter Truffle, which I knew he would love, because it’s filled with all the earthy truffly umami flavours one would hope for, but was also rich and creamy.

The Double Cream Garlic Herb was creamy, buttery, and savoury, with a double punch of garlic and herbs. I spread it on crackers, but the recommendation (from the MK website)  of using it as a schmear for a bagel sounds like a perfect idea. This was my second favourite, and still is, when I take tiny bites of it whenever I open the fridge. First impression wasn’t as strong, but it’s almost psychosomatic – it sounds kind of boring. Herb and Garlic? I’ve done this before, let’s change the channel – but no. No. This is not just your run of the mill herb and garlic pairing, the flavours are just so beautifully layered and intermingled. 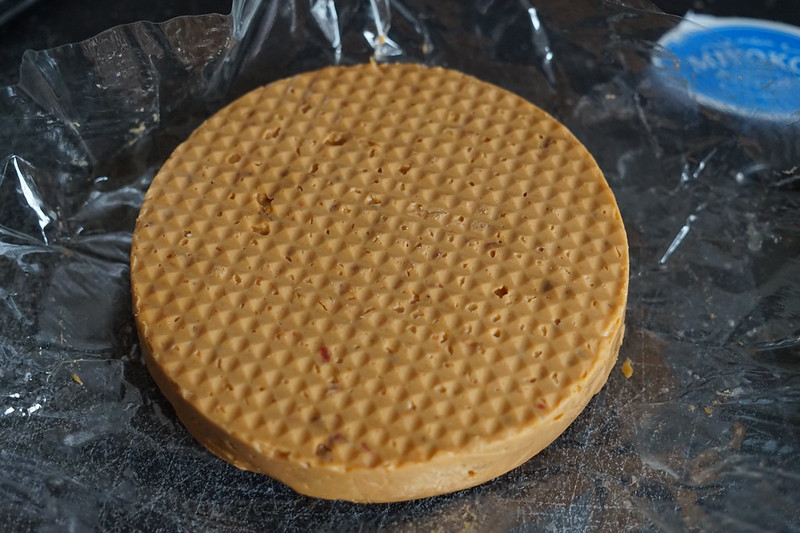 The Double Cream Sundried Tomato Garlic started out as one of the softest cheeses, with a bit of  a spicier quality, with tomato and garlic. I can imagine it on pasta or rolled up with fresh basil leaves as an appetizer, but haven’t tried melting it yet. It was great on the triscuit style cracker. 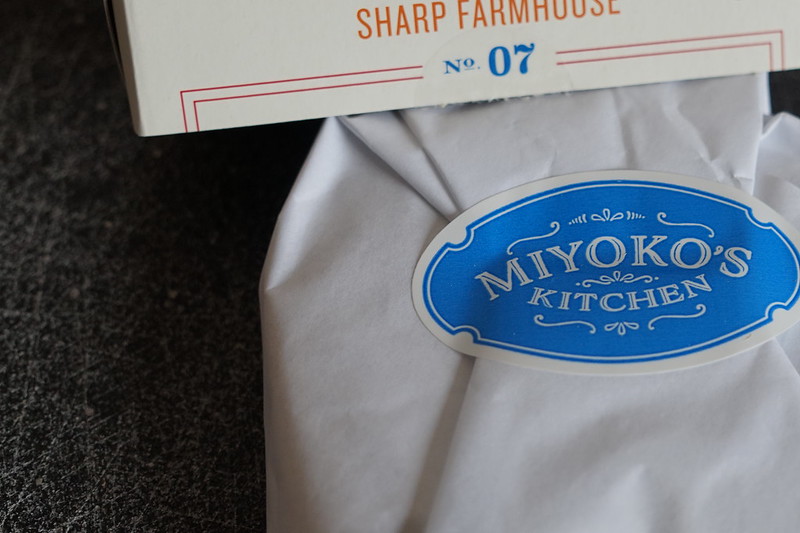 The High Sierra Rustic Alpine and the Aged English Sharp Farmhouse were both harder cheeses with varying textures, but mostly similar, with the Aged English Sharp Farmhouse being the most firm and sharp. The Rustic Alpine was slightly softer in both texture and flavour, but paired especially nicely with the organic stone ground wheat crackers from Back to Nature and a bit of apple (though what I’d really like to do is get some apple crackers and try that as well)

Note: I was not compensated in any way for this review, but if anyone out there wants to send me free vegan cheese I’d like to go on record and say, please feel free to do so! Ha! (but seriously, I’m not joking – send me vegan cheese. Is this thing on? )