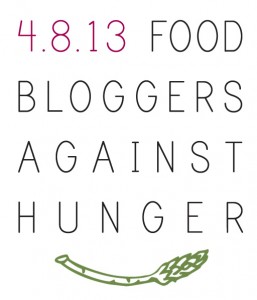 I was reading the New York Times and saw something especially relevant to my interests, and I want to keep passing it on in hopes that people will participate and also consider poverty and hunger, even for a moment. This project organized by The Giving Table calls food bloggers to get together on April 8th, 2013 and do good with food, and unite to fight hunger.

Food Bloggers Against Hunger – April 8, 2013 from Nicole Gulotta on Vimeo.

It’s also in response to a movie on hunger in the United States called A Place at the Table, you can check out the trailer and it’s playing at the Bloor Cinema from April 5th to April 13th. You might have even seen it at last year’s Hot Docs festival.

This project is obviously USA Focused, but the issues with food deserts, resource scarcity, and hunger are not isolated to any one country, it’s happening everywhere. I think the Guidelines (PDF) recommended by The Giving Table are great, and the calls to action are easily translatable within a Canadian context. (but if you’re in the USA – please – take a second and send your congressperson a letter.)

There is hunger happening right in our backyards, with the UN Special Rapporteur for Food revealed statistics in Canada that are pretty shameful. We can do so much better!

“We have a large number of Canadians who are unacceptably too poor to feed themselves decently,” he said.

“We have in this country more than 800,000 households who are considered food insecure…. This situation is of great concern to me.”

Canada has a standard of living that is envied throughout the world, he said. But inequality is increasing and the top 10 per cent of the country is 10 times more affluent than the bottom 10 per cent. Taxes and benefits reduce inequality much less than in most OECD countries.

Canada fails to adapt its social assistance benefits and minimum wage to the rising costs of basic necessities, including food and housing, he added. Food banks are not a solution but a symptom of failing social safety nets.

This also coincides (somewhat) with the Live Below the Line Challenge that I learned about through the Fiesta Farms blog, it’s happening later this month. I intend to participate in the $1.75/day challenge, I will not be raising money through the Live Below the Line Challenge. While I recognize the importance of supporting developing countries and the people in them, I feel strange about not raising awareness, funding, and support for the organizations that support individuals in my own community that are struggling to meet basic needs like food and shelter. It seems especially wrong to me that hunger even exists in Canada.

If you’re not sure who to donate to, or need a suggestion – but unfortunately, as Laura the Blue Eyed Bookworm noted, the OVFB site is suspended, which is too bad. The Fort York Food Bank is also an amazing organization that connects people with food, skills, counselling, and other services. Take a look at groups like the Parkdale Activity-Recreation Centre, Food Not Bombs, or Not Far From the Tree. Add your voice, your skills, your money, or your time to groups making the world a better place through empowerment and education.

Will you be participating in Food Bloggers Against Hunger next week?