Our first day in Orlando we checked out Downtown Disney, and Babycakes NYC, and did a little bit of Shopping (at the Lego store). Unfortunately, the night we arrived in Florida my camera, which I had been a constant companion for just under a year, stopped working. We started our day with a very drove over to Tiger Direct to pick up a cheap replacement that would serve me pretty well for the rest of the roadtrip, but in the process got into a bit of an adventure on Orlando highways. We learned a valuable lesson that day… critical thinking is good to use while using the GPS. Luckily, we figured things out (with the help of Google Maps.) and got where we were going.

During our time in Orlando, we went to Ethos Vegan Restaurant everyday we could (which ended up only being twice). They were closed early on Christmas Eve, & closed on Christmas Day, but open for Boxing Day, which is just a regular day in the USA and Christmas Eve Eve. They’re located in Winter Park, a suburb of orlando.

On our first visit we walked in all excited, because the space is HUGE, especially taking into account the relatively tiny restaurant spaces (vegan or otherwise) we’ve got in Toronto. It’s got a big sign outside including the Vegan word, but otherwise just looks like a regular ol place, with a diverse colourful art selection on the walls, a boardgame corner, a bar, a little to-go corner, and several booths and tables arranged comfortably around the restaurant. 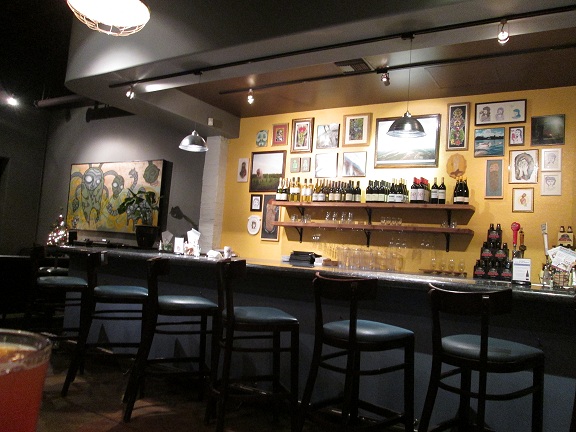 It was full of patrons, but not loud, we started with their beer of the week – Jai Alai, an American style IPA, from Tampa, Florida’s Cigar City Brewing (yes, they’re on Barnivore.) I should have skipped it as soon as I knew it was an IPA, but JC really seemed to enjoy it. It’s fruity and hoppy, with all the bitterness and malt interplay people seem to love about IPA’s (which is exactly the same thing I don’t dig about IPAs.) On our first visit we started with the Garlic Knots. Because how can you go wrong with baked dough, brushed with salty garlic butter and sprinkled with vegan parmesan cheese? You can’t really. They were slightly lighter & less doughy than the garlic knots I’ve had in the past, but that was probably for the best. On our second visit we were celebrating my birthday and so, in the spirit of celebration, opted for two appetizers. And mostly because I had forgotten to order one of them on our first visit – the Sausage Rolls, which seemed very much like a field roast sausage covered in a flaky layer of pastry. People recommend this often, and enthusiastically, and this app was tasty, but I could have skipped it. On the bright side, it came with a delicious spicy mayo dipping sauce though which came in handy for JC’s app, the Boxty. We are big fans of potato pancakes so when we saw the Boxty, an Irish potato pancake, on the menu, we had to give it a try. It was topped with sour cream and topped with chopped scallions, and it was delicious. Especially when dipped into the sauce that accompanied the sausage rolls. Yumsville. On our first evening there, JC ordered the Pecan Encrusted Eggplant – because it sounds amazing, and is really delicious. It’s a sauteed piece of eggplant, encrusted with pecans, and browned in a red wine sauce. Paired with mashed potatoes, gravy, and a “vegetable” which in his case was several skinny sprigs of asparagus. On our second visit I ordered the special of the day – the Buffalo Chicken Wrap with a side of chips and salsa. Delicious. Crispy pieces of sorta spicy not-chicken, with lettuce, tomato, cucumber, and a mayo sauce, wrapped up in a spinach tortilla. If you happen to see this on the menu some day, and you’re looking for something that isn’t very heavy, but is pretty satisfying – order it! Only one menu item made an appearance on both visits, and it was none-other-than the What’s the Dilly, Philly? One of the best vegan philly cheesesteaks I’ve ever had, and after several  Philadelphia visits, I’ll admit that I have eaten a lot of sandwiches that I can compare it to.

They start with a French deli roll, slice it, & toast the inside of the roll <—- this is important. Then they toss in sauteed marinated seitan chunks with onions, red & green peppers, mozzarella cheese, and veganaise. You’ve got yourself a serious sandwich. It’s not a light meal, after I ate it on our first visit I wanted to take a nap. JC ordered it the second time, with less sleepy results. Either way, it’s an awesome, delicious, sandwich, and you should try it sometime.

All around, I really liked Ethos Vegan Restaurant, for the ambiance, for the service, music, and drinks selection. It’s casual, friendly, and I will definitely pay them a visit the next time I’m in Orlando.