After our not so fun time at various airports the day before, our first real day in Orlando was spent taking it easy and planning out our next couple of days. Spending the day before at the Airport was surprisingly tiring, both with lack of food options, no fresh air, and little activity. If they ever put a mini gym past security I’ll be really excited.

First on the agenda was to check out Downtown Disney. Downtown Disney is on the park property, but not something you have to pay to get into. There are lots of stores, entertainment options, and food spots, but we went specifically to visit Babycakes in the Downtown Disney Marketplace. Despite going to NYC and being in the area almost every time, we have never gone to the BabyCakes location in New York, so it was time to try out their treats after hearing mostly positive things from friends. 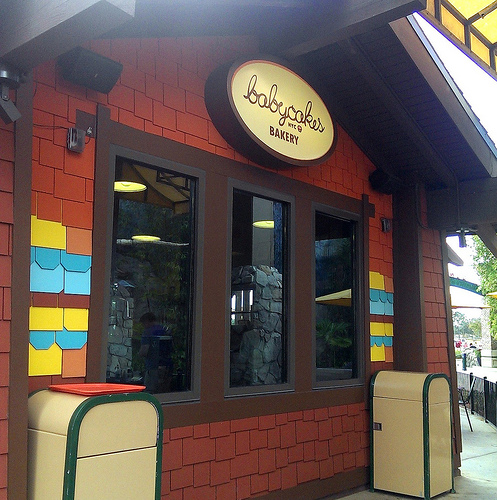 We had some trouble finding BabyCakes, as it wasn’t on any maps, or signs at Downtown Disney (at least not any we could find) – we actually wondered if it was still open – but a quick check on twitter told us it was and we kept searching. In case you have trouble too – BabyCakes is located in the same building as Pollo Campero and Bodie’s, next to the LEGO Imagination Center (where we had to buy personalized mugs to add to our mug collection.) On the day we walked in, they had lots of fantastic looking treats including cookies, cupcakes, brown notice, and cake donuts. Everything is refined sugar-free, gluten-free, wheat-free, soy-free, dairy-free, egg-free, totally vegan, and kosher. But despite being free of so many different things, the items I tried were not flavour-free. They were pretty delicious.

I had my eye of the French Toast cupcake as soon as we got close enough to read the name. It made for a very convincing French Toast cupcake. Like biting into a fluffy piece of french toast topped off with a buttery cinnamon icing.

JC also ordered a pink cake donut and a vanilla cupcake. Since I’m not a cake donut fan, I can’t say what the donuts were like, other than they were a slightly more tender cake donut than I’m used to.

If you find yourself in Downtown Disney try BabyCakes treats. You can also try their items at other locations around Disney properties:

Next on our Orlando adventure – Ethos Vegan Restaurant, Universal, and Disney.