Continued from (part one) Little City Farm is a 1/3 acre vegetarian Bed & Breakfast that feels like an oasis in the middle of Kitchener, Ontario. It’s run by a small family – Karin, Greg and their daughter Maya. Where, in addition to being a bed & breakfast, they also run community workshops on living sustainably and events.

Their goal is to self-sufficiently provide most of their own basic needs, and also reduce their impact on the environment. And I think they do a pretty great job. The Little City Farm Bed and Breakfast is powered by Bullfrog Power, is by default meat-free, is a low chemical house, where they use only biodegradable & environmentally friendly products for cleaning (including some products that Karin, an herbalist, has made herself. Though FYI some of those contain beeswax,) all the bedding is made of natural fibres (which includes: cotton, wool, and hemp.) Some of the pillows contain some kind of feathers, which I might not have noticed except I’m mildly allergic.

They do not have a central air-conditioning system, so there were parts of the day that felt warm – BUT they have ample trees for shade, and all the windows open so it ended up being quite nice. When we walked up to the room we were greeted with a few bottles of refreshing filtered water (I drank one of them immediately) and an ample collection of tea. There is also a massive bookshelf with books on urban homesteading, sustainability, urban farming, local food, and more. 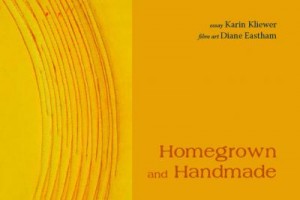 If you stay here, make sure to find the Homegrown and Handmade chapbook. It has an essay from Karin Kleiwer, and fibre art from Diane Eastham, and tells the story of Little City Farm.

One thing that presented a bit of an ethical dilemma for me is that they have a chicken coop in their backyard, and it’s probably part of the reason it’s taken me so long to write about our lovely experience. While they don’t eat the chickens, they do use the eggs. Which for me, is still contrary to my feelings on using animal products. But when given the option between a meat filled B&B or hotel, ultimately staying at Little City Farm was still consistent with my core values. I’m usually completely and adamantly against backyard chickens, probably in part on prinicple and also because I think it can be horrible (please see Neighbours Opposed to Backyard Slaughter for reasons why.) What made me feel a hundred times more comfortable staying there was during our tour of the property, Karin addressed one of my concerns about the chickens before I even had the chance to ask.

They plan to keep these chickens (& not get anymore) until the day the chickens die of natural causes, even after they’re “spent” (as in, when they stop producing eggs.) Watching Maya, their daughter, treat the chickens with affection and love in the same way as I would pick up my big orange cat was weird and also lovely. That said, since I like to go back, way back, even the wonderful-est of home chicken coops still starts out getting chicks from somewhere. And that somewhere probably engages in chick culling. But enough about that. For me, in the grand scheme of things, I support what they’re doing. They’re living off the land (mostly), growing a lot of their own food, depending sparingly on city infrastructure, and in a lot of ways going their own way. This is what I like. Being connected to growing, production, and creation of the things that are easy to take for granted living in a city. Maybe it’s because in another life, or maybe just in my daydreams, I would have wanted to do something like that (just without the chickens.) After getting settled in at the B&B we walked over to Cafe Pyrus to meet with Sarina and Family for a quick supper. It was an experience I’ll definitely have to share in another post. The next morning at Little City Farm, we both woke up feeling completely rejuvenated and ready to head over to Niagara VegFest. But first… we had breakfast. And it was amazing. I just can’t say enough about how wonderful this meal was. We started out with granola on top of rhubarb preserves and a fresh sprig of mint and edible flowers. And of course, there was a lavender shortbread cookie. I don’t even usually like granola… but I liked this! Add to this, we also had coffee made from green beans they sourced from Cafe Justicia, a beyond fair trade coffee supplier. They roast and grind the beans themselves. Yes, really. Next we had this wonderful plate of freshly made pancakes, and a side of flavourful locally made Henry’s tempeh (p.s. the website isn’t working right now, but you can check out the tempeh in action from my once-upon-a-time Vegan Food Swap pal here) topped off with some asparagus, and chive flowers.

It was glorious and I could not have been more happy. The B&B is by default lacto-ovo-vegetarian, but they will do their best to make things vegan, wheat-free, diabetic, macrobiotic, or raw with some advanced notice.

After this lovely breakfast, we said goodbye to Karin, and drove down to Niagara VegFest for the rest of our awesome weekend veg adventure.

Other things you should know: Cash Only. I had trouble reaching them by email, so phoning might be a better option. This is not a wheelchair accessible space, to get to the guest rooms there are stairs involved. There is WiFi! Just ask! (we didn’t)