Prairie Girl Bakery opened it’s first location on King and Victoria in 2011, the same year I moved to Toronto… from the Prairies. The owner is originally from Saskatoon, where I lived for several years, and I appreciate that she takes pride in her Prairie roots, because so do I. Since that time, they have added two more locations, one in First Canadian Place, and one in Yorkville. So when Prairie Girl Bakery reached out last week and said they were launching a line of vegan cupcakes, I couldn’t wait to try them. I really couldn’t. They offered me a free sample pack of mini cupcakes to try, (and full disclosure: I’m totally taking advantage of that offer next week) BUT, I also picked up a half dozen cupcakes this morning to share with friends (because I’m nice like that.) I walked over to their First Canadian Place location (lower level), and thankfully got there before the lunch rush. Their counter person was very friendly and helpful, and the whole process probably only took 4-5 minutes. Conveniently, they had 6 different varieties of vegan cupcakes to choose from; so I got one of each and waited patiently to try them. And when I did, my only complaint was that they were too big (…for me to effectively stuff in my mouth.) Prairie Girl Bakery has made something great, and it’s nice to see a commercial non-vegan bakery take on vegan baking, and do it so well. There are other non-veg bakeries around the city that have made the attempt, but I was never as impressed. I think this might actually the best example of a vegan cupcake from a non-vegan bakery I can remember – and I have eaten a lot of cupcakes.

That’s where my comparisons end however, because we are lucky enough to have some really solid vegan cupcake options in Toronto. Prairie Girl Bakery is up against some serious competition, and I feel their cupcakes hold up really well for anyone looking for traditional cupcake flavours like Vanilla Chocolate, Red Velvet, Chocolate, etc, but I’m curious to see if they’ll be doing any of their extra creative “Treats of the Week” cupcakes in vegan form. For me, that would really kick things up a notch.

At the moment, the ones I’ve crossed out are the ones not available vegan (according to the website – please check to confirm) but that leaves us vegos with a pretty awesome selection. 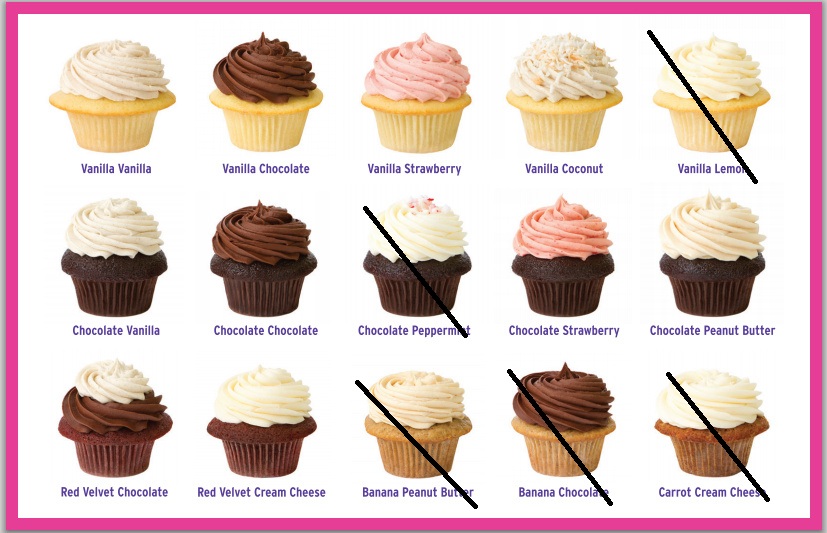 Now on with the cupcakes. One friend tried the Red Velvet Chocolate: a beautiful cupcake with rich red moist chocolate cake covered in a fluffy whipped chocolate and vanilla icing. While the red velvet cupcake was delicious, it was also very moist, and fell apart quite easily.

There was a difference between the vanilla and chocolate ones in this respect, as the chocolate based ones seemed extra moist (though unlike the red velvet – all the other chocolate ones we tried held together quite well), while the vanilla ones were spongy and kept their shape. 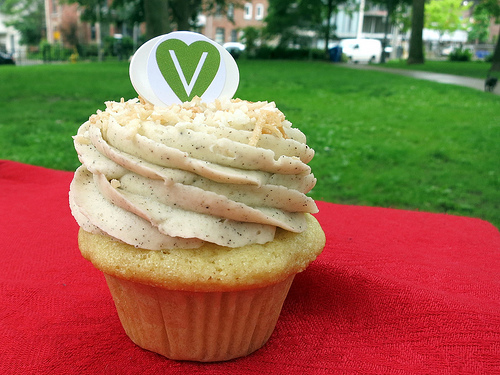 My first bite started with the Vanilla Coconut. If you are expecting a lot of coconut flavour, like I did, don’t. It’s actually the regular vanilla icing topped with toasted coconut, but the cake was tasty and paired well with the thick vanilla icing with coconut shavings. Like I mentioned before, these aren’t tiny cupcakes. They are not a “healthy vegan muffin,” they are sweet, they contain sugar, and they are most definitely a treat. You might want to share with a friend or several like I did… but then again, you might not.

They will have regular sized vegan cupcakes available at all of their locations, and they’ll also have mini varieties available for pre-order. (you can also order online)

Ultimately, I think Prairie Girl Bakery has done a great job, and I look forward to trying more from them in the future. It’s nice to see another player on the vegan cupcake scene.

Things to be aware of:

First Canadian Place
100 King Street West, Toronto, ON
(p.s. & while you’re there you can check out Kupfert & Kim)