This weekend we drove down to spend the day in St. Catharines. Why? Mostly because Beechwood Doughnuts was having their grand opening, but it just worked out that we could do a whole bunch of things in St. Catharines (besides eating donuts.) Beechwood Doughnuts is run by several of the folks that made the donuts at Rise Above, but if you had them before, as I found out this weekend,  they’re even more awesome now. 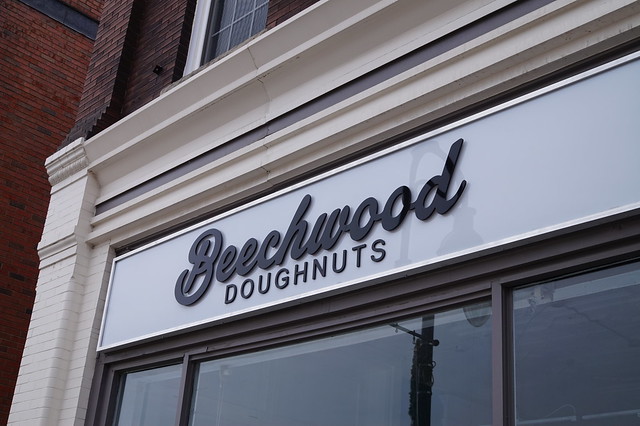 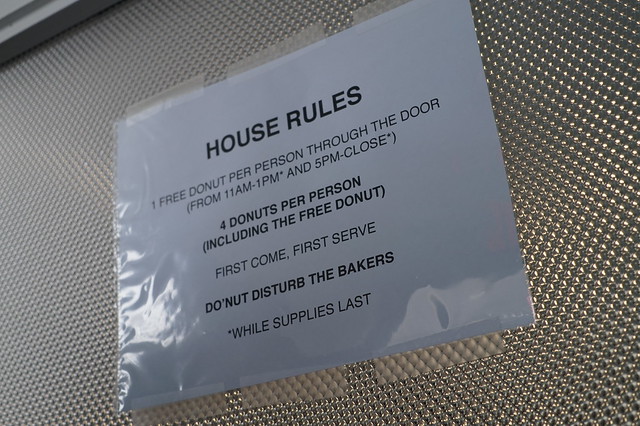 JC got to play Magic at Phoenix Rising, a game store conveniently located just a few blocks away from Beechwood Doughnuts, and I got to hang out with a few mugs of coffee at Mahtay Cafe  &  the internet. (& checked out the photo exhibit in the community room.)

Plus, this visit allowed us the opportunity to visit with a friend that lives in the city, where I was reminded I don’t dislike all dogs, just some of them (Gilda being one of the exceptions.) 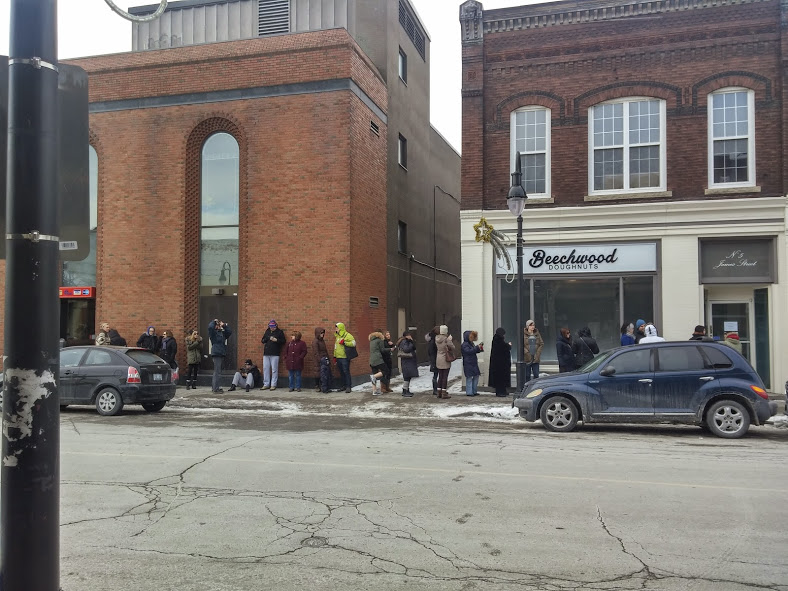 Starting at around 10:20, JC and I stood outside Beechwood Doughnuts, along with the brave soul that started the line. Until she showed up, I had been sitting in the care waiting for more people to show up. And more people showed up. By around around 15 minutes to opening there was a line up down the street and around the corner. So 1. I was really glad to be ahead of the game. 2. I was really happy for Beechwood Doughnuts.

To get to his game thing on time, around 5 minutes before 11, JC had to start heading over to the game, and thus, despite being third in line, he did not get a free donut at 11am (but being the nice person I am, I did deliver one to him later on.) 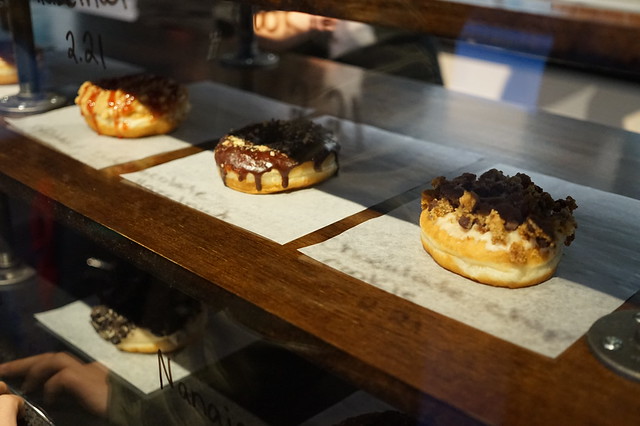 The donuts in the shop were beautiful, with varieties ranging to the good old chocolate or maple dip, to the more unique options like earl grey and nanaimo.  I was really excited about the earl grey, but didn’t have a plan going in beyond that. Our local friend had tried the nanaimo and recommended it. But the last two were impulse choices – peanut butter and jelly, and the ever classic chocolate dipped. 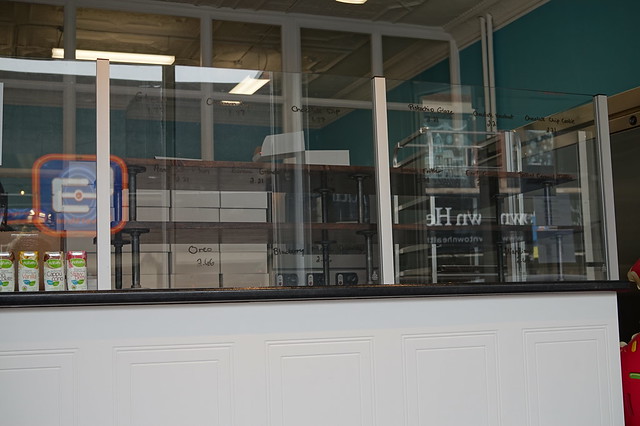 By around 1 or so, they were totally sold out, because while they were giving out free donuts, most people were also buying the 3 extra donuts up to the 4 donut maximum (myself included). I had my box full and a cup of Balzacs coffee.

In addition to coffee, you can get assorted teas, juices, and assorted natur-a non-dairy milks. If you put anything in your coffee/tea they have almond, soy, and coconut milk available. 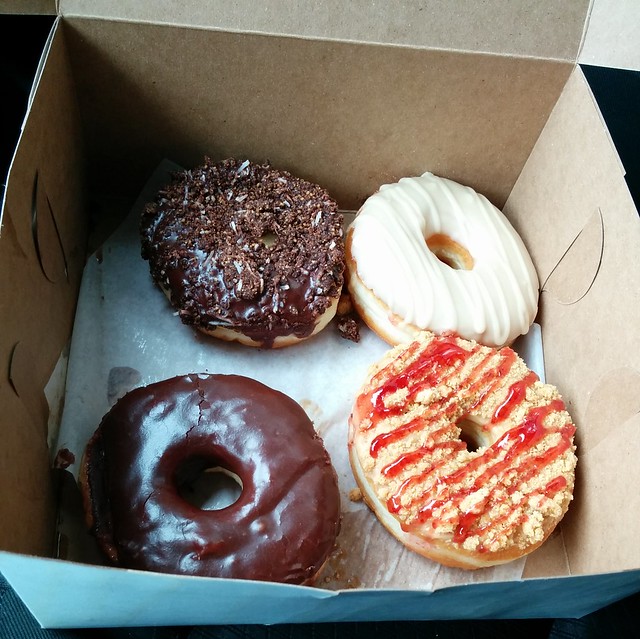 Clockwise from the top left: Naniamo, Earl Grey, Peanut Butter and Jam, and a Chocolate Dip

JC won/tied his Magic tournament and we came back and stood in line for round two at 5pm,  so JC could get his special free donut and we could take a box or two of the donuts back home with us. For more research… yes but mostly enjoyment. 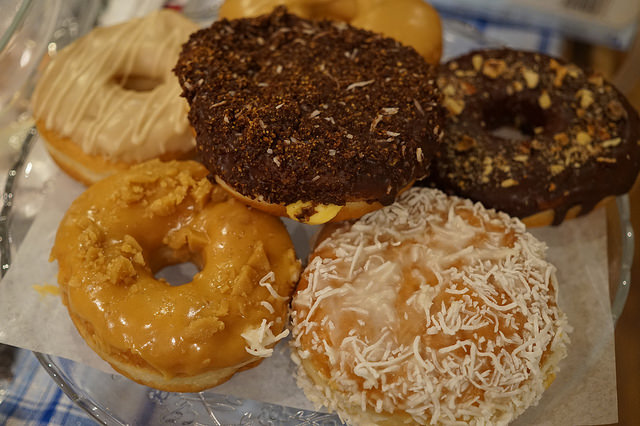 To add to the general appeal of Beechwood Doughnuts, they were also conscientious enough to pair their Grand Opening, with the opportunity to help migrant workers from Jamaica in the Niagara area stay warm this cold season by acting as a drop off point for warm clothing donations. Gotta say, this seems like a great start. 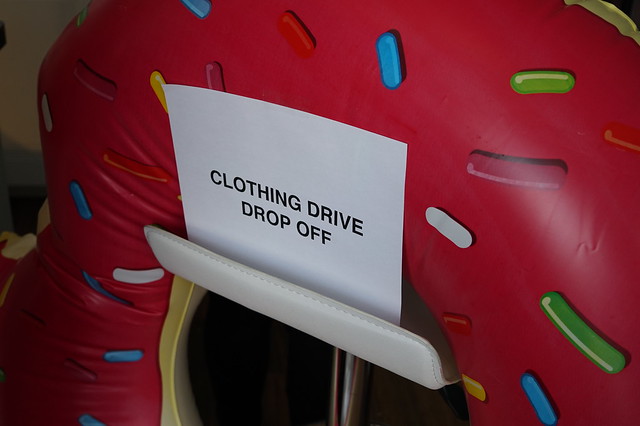 Looking forward to seeing what else they come up with.

5 James Street St. Catharines, ON L2R 5B7 (map)
facebook | instagram | website-in-progress
info@beechwooddoughnuts.com
Current Hours  Tuesday to Saturday 11am to 7pm (or until Sold Out)

Accessibility Info: There is a reasonably high step to get inside. Otherwise there are no tables, but a side board area that is pretty good for sitting down on.