Porter House has been packed for weeks, ever since they opened in late December last year, but we lucked out on Monday and got a table right away. The trajectory of our evening was kind of funny – JC and I met at the UofT for an event on racism and the last municipal election but it was too full (for us) so we left (but followed along on twitter.) JC suggested Hot Beans – we drove over and it looked closed, with stools on tables, so we were homeward bound. If not for the fateful decision to go down Dundas, our evening might have looked completely different.

But as we moved closer to the Brockton/Rusholme area… again, JC had a good idea – Why not Porter House? Why not? The other few times we’ve tried to go – it’s been really busy, which is good for them, not so good for us. They don’t take reservations, so what you see is what you get. But what about Monday? Well, as we found out, it was a good time to get in there, when we arrived at 6:30ish, there were seats available. 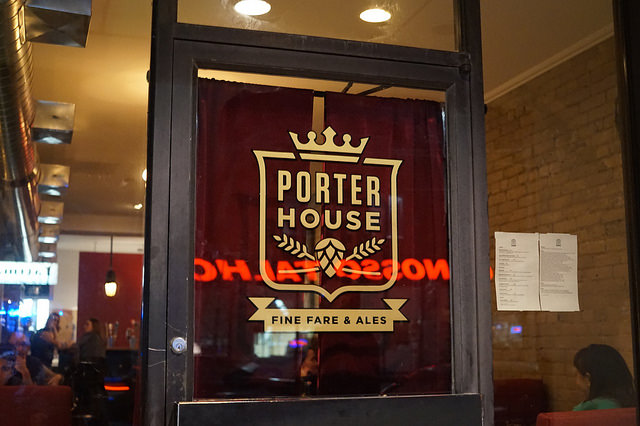 We took a peak at the menu – you can see it online – and ordered a couple of the on-tap options – JC got the Amsterdam Vicars Vice and I went with a West Avenue Heritage Dry Cider.  I like cider, so I’m an easy sell, but I was pretty blown away by the complex flavours of JC’s brew. It’s a seasonal brew available late in the year and dark and rich. It’s got that nice malty caramel/chocolate combo with a pleasant bitterness (within my bitterness comfort parameters – so as a point of reference: I generally don’t like IPAs.) 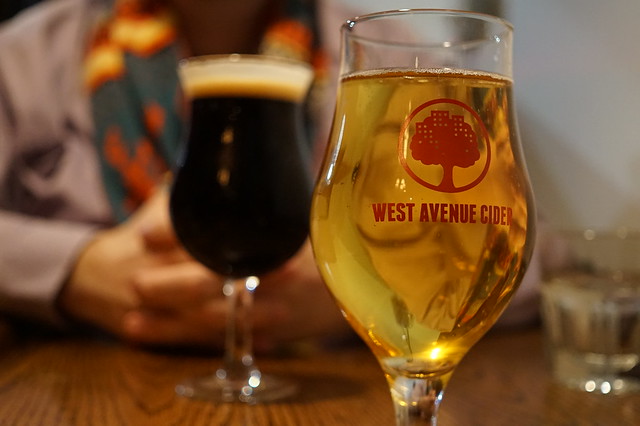 The Bread and Preserves was the obvious choice to start – mostly because I like eating things off of things that are not plates, preferably flat wooden boards, especially when they’re from vegan places. The board featured a couple of pieces of bread (one white and one wholewheat), some kind of gravy (or maybe that was the hazelnut pate?), seedy mustard, pickled onion, something that seemed very much like a spreadable cheese-like wedge, but was probably the miso cured tofu, a tasty chutney/jam, and a small jar of king mushroom and chestnut confit. 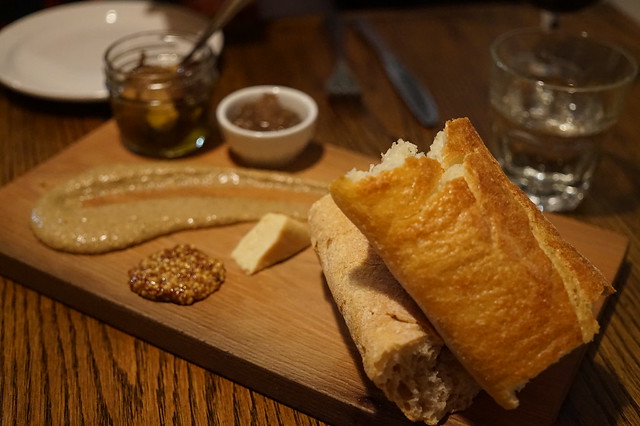 It was a great little board, and we had a good time sharing it, especially until our two mains appeared. By the time we were finished, the board was clean. Clean board club: Population JC & MeShell. 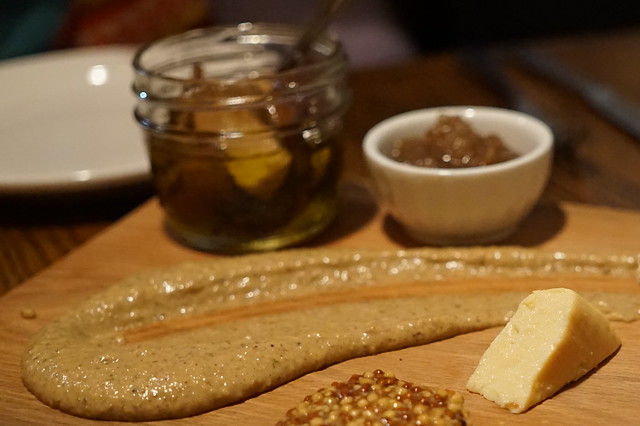 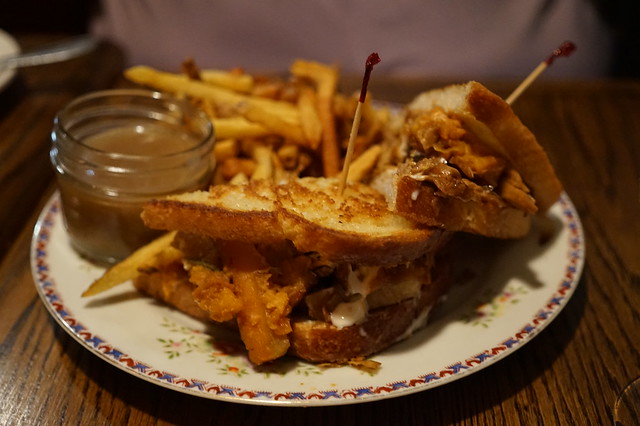 I had the Lentil & Ale Pie, which was full of puy lentils and peas in puff pastry with a very tasty creamy coleslaw and an bitter endive/other greens salad. This dish was aided by a healthy helping of JC’s left over beer gravy. I liked the flaky top crust, but wished for something saucier (which I fixed with beer gravy.) Regardless I ate it happily. 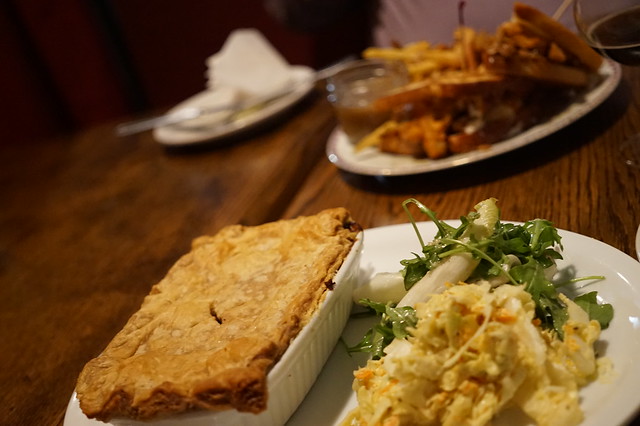 And then finally – in the interest of research we had the bread pudding – which had currents, tasted like bread pudding, and was covered with a bourbon vanilla sauce. (p.s. it’s not really pudding, so don’t expect pudding.) 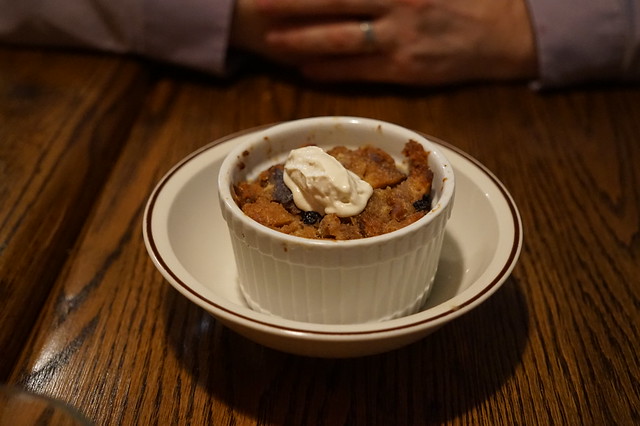 Service was nice enough, or at least, our server was great. When we walked in, we stood around feeling kind of lost for a few minutes, but I suppose we were just supposed to pick a seat and sit down. They have a great selection of beers, a few ciders, and a couple of wines if that’s your scene, I’m just glad we have another late night vegan-friendly spot in the city. 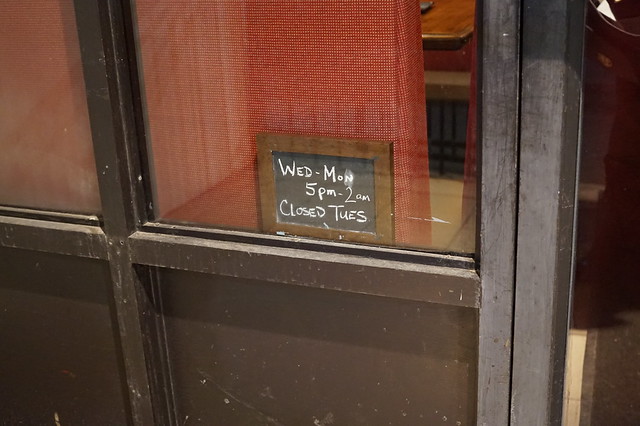 Accessibility: Door on main level/no step to get in – 2 gender neutral restrooms on main level, doorways are relatively narrow. A couple of booths, several tables. Some bar seating.