I’ll get back to Toronto/Ontario stuff soon, but so far, I’m still reminiscing about NYC. Besides, I want to write about a certain vegan bar at some point… but it’s been too happenin’ for me to eat there.

As of last month I am yet another year older. Which is of course something that happens every year… but this time I have (yet again) successfully entered into a whole new decade, which still feels like it means nothing much. But now I have to select an entirely new section on drop down boxes. And this number has so much baggage. Thinking back, it doesn’t feel like a significant amount of time has passed, though this year has felt like it’s passing by at a snails pace – for better or worse.

Back to the less introspective navel gazing portion of my birthday celebration though…. once again, JC went out of his way to make my birthday special, despite my terrible act of waking up much earlier than usual and almost messing up the order of things. My actual date of birth – December 26th results in some regular complications because places close. Regularly. 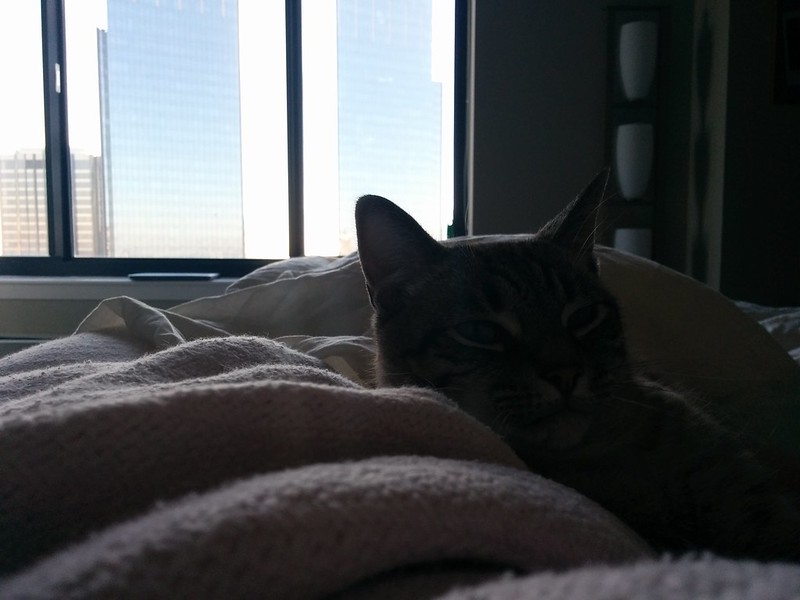 I woke up to hear JC leaving our temporary apartment, and to this face snuggled up with me in his typical Gizmo fashion. Now the question was… do I check Facebook for validation of my various friends ability to click the “wish MeShell a happy birthday” button? Or do I lay peacefully in the sunshine snuggled with a borrowed cat thinking cozy thoughts?

I chose the latter, and likely faded in and out of dreamland until JC returned with a beautiful fresh haul of assorted New York style bagels (I’m specifying this solely because there have recently been Montreal-style bagels appearing in NYC, which is too bad – what with the boiled-in-honey water thing) and some fantastic tofu cream cheeses (my favourite of which is the tofu chive – what magic). 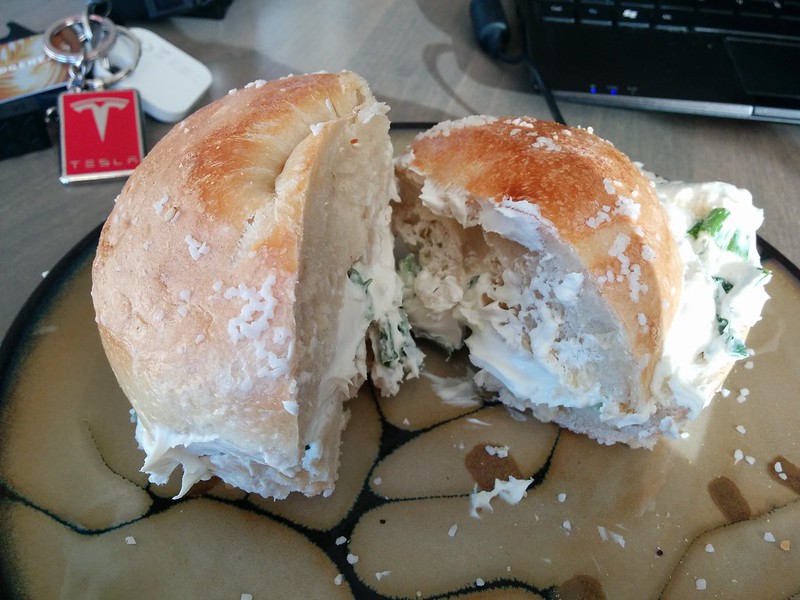 He kindly prepared one of these bagels for me, with the option of breakfast in bed, but since I like sitting in an upright fashion when eating chewy delicious bagels, it was time to put on a fuzzy onesie, and welcome in the new year in peak style.

JC disappeared again and returned with this beauty. 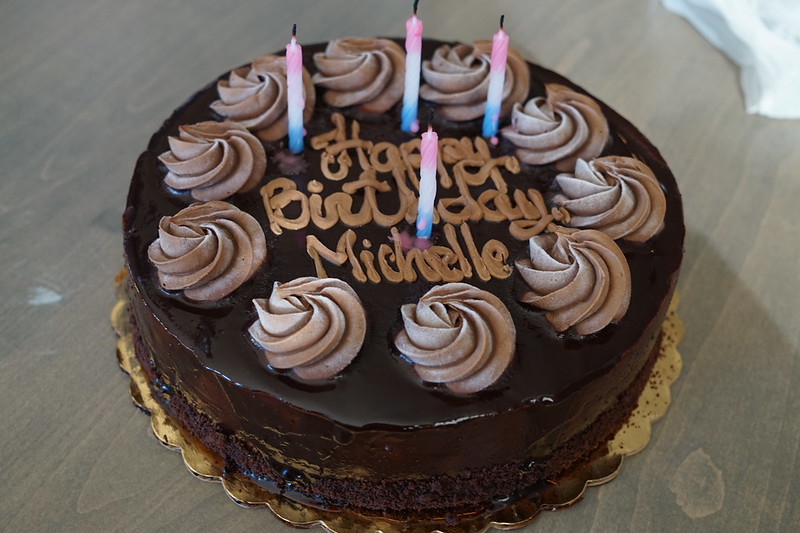 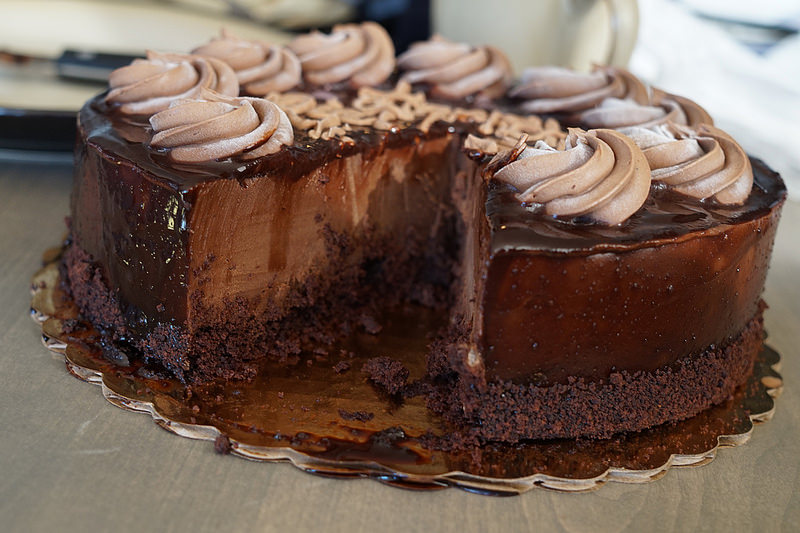 We had dinner plans but nothing in the middle, beyond going to Brooklyn for a birthday drink at PineBox Rock Shop. But before we did that, I wanted to check out Dr Cow’s fancy new (to me) cheese shop in Williamsburg. 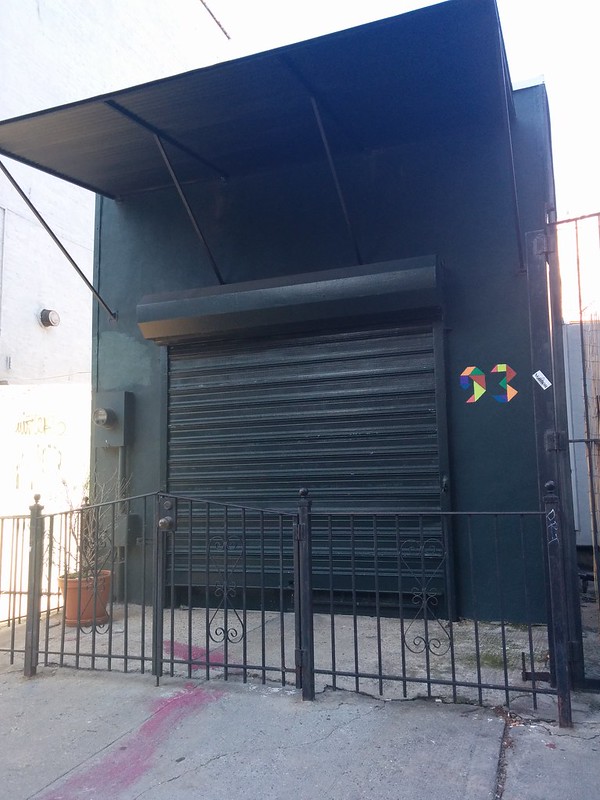 But, as I alluded to earlier – places close on my birthday. And we were greeted with shutters. But it’s okay, I only moped around for about 5 seconds. The benefit of being used to this, is being used to this. Someday I will visit this totally vegan cheese shop. Someday. (We will have to visit Vromage when we’re in California for ExpoWest.)

I really wanted to walk around, and JC thought it would be fun to go for birthday drinks at the Pine Box Rock Shop, and I thought it would be fun to stop into Dunwell Donuts, so we did all of those things. But not before enjoying the copious amounts of graffiti and street art in Bushwick and area. (I was glad to catch this piece below from Madame Moustache from France) 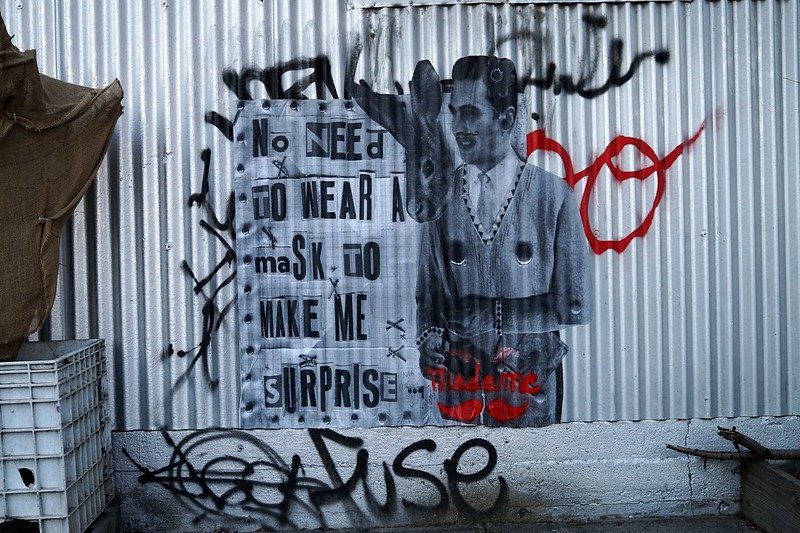 Paying attention to and photographing and collecting street art photos is one of my favourite things, so every time I’m in a city or area with lots of it, I’m just delighted. Our trip to New Orleans last year was surprisingly lacking in the street art department, but San Francisco the year before that was incredible. 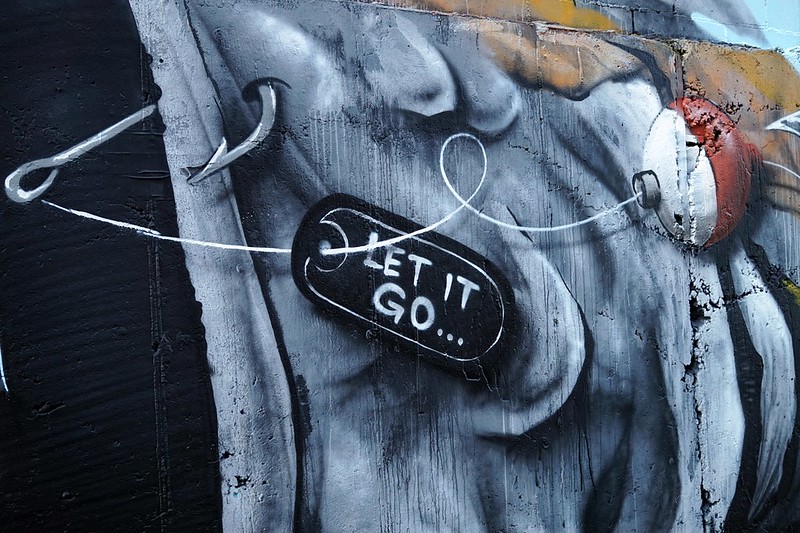 And of course, all these talented people sharing their art with the world reminded me that it has been much too long since I last walked through Toronto’s own prime street art space the alleyway near Queen Street. And since I’ve been back I’ve been trying to get back out there – ideally with a friend.

We popped over to Dunwell Doughnuts, because they were both on the way, were open, and had donuts AND coffee. 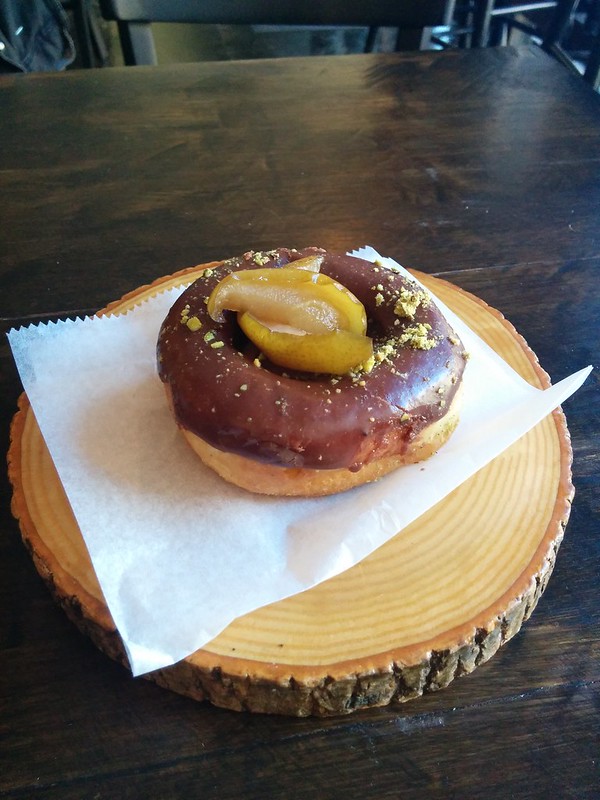 And we could spend some time hanging around for Pine Box Rock Shop. I don’t think anyone wanted to be there that day, and then eventually, neither did I.

Thankfully, just a short walk away was Pine Box, which was amazing, and the perfect pick-me-up in the early evening. The Bartender was so friendly and welcoming, it was a wonderful time. The only time we’d been there was in 2013 for on of the summer time Vegan Shop Ups, and it’s amazing how different the space looks.

The Shop up was a hustle and bustle of excitement, on they day we went, it was a pretty calm, with a few of us sitting at the bar, watching football or the original True Grit in ultra remastered high definition. It seemed to alternate, but if I learned one new thing on my visit to NYC, it was about the Pickle Back. 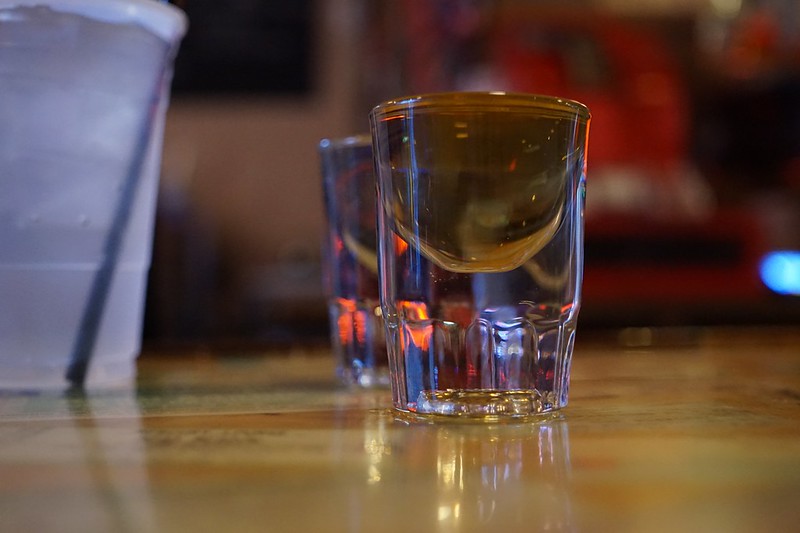 If you haven’t been introduced yet – a pickle back is a shot of whiskey chased with a shot of pickle brine. And seems to have originated in Brooklyn, if wikipedia is to be trusted. I would probably just drink pickle juice anyway, so it seemed like a great idea. And it was. The pickle back premise is that the pickle brine neutralizes both the taste of the whiskey and the burn of the alcohol. I don’t mind those qualities of whiskey, but I do like any excuse for pickle juice.

A few drinks later and it was time to move on to our next destination, so we hopped on the L Train back to Manhattan. Franchia Cafe, a nice spot, though the last few times have become increasingly less enjoyable. The food however is great. The layout, not so much. We were seated beside patrons that thought it was funny to sing throughout their visit, and then laugh at us. Weee. Happy birthday? Yeah, not the restaurants fault, still not fun.

Anyway. Back to the food. We started with the assorted dumplings which were great as usual especially in their fried incarnation. 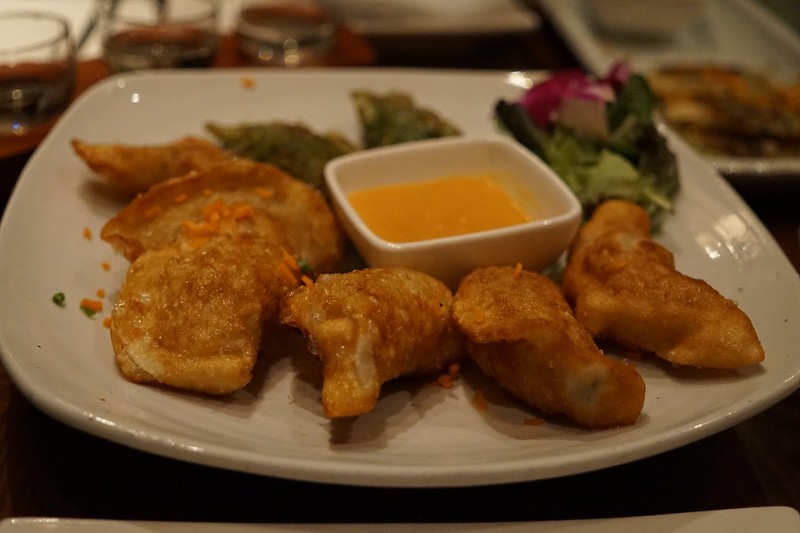 We also ordered a sake sampler, which unfortunately tasted very watered down this time around. (Can you tell, I wasn’t having a super great time?) But at least it’s pretty right? I like that each individual sake was labelled. 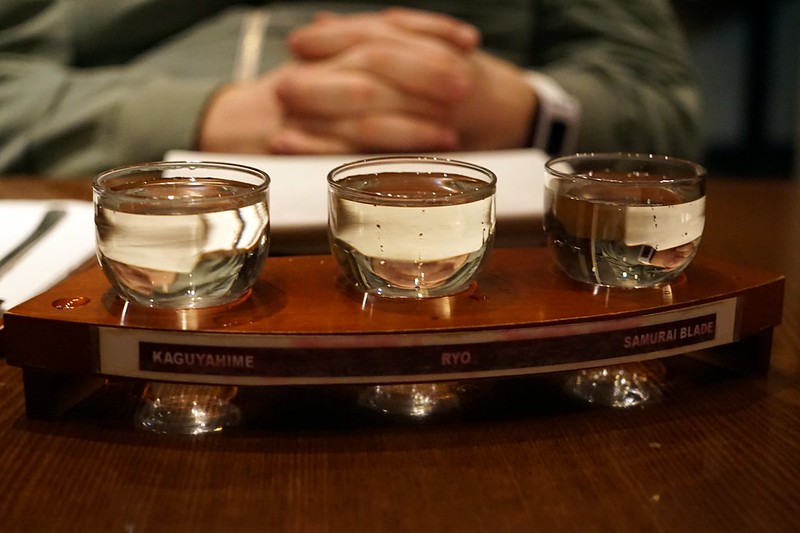 Followed eventually by a wine sampler, which was much more interesting. 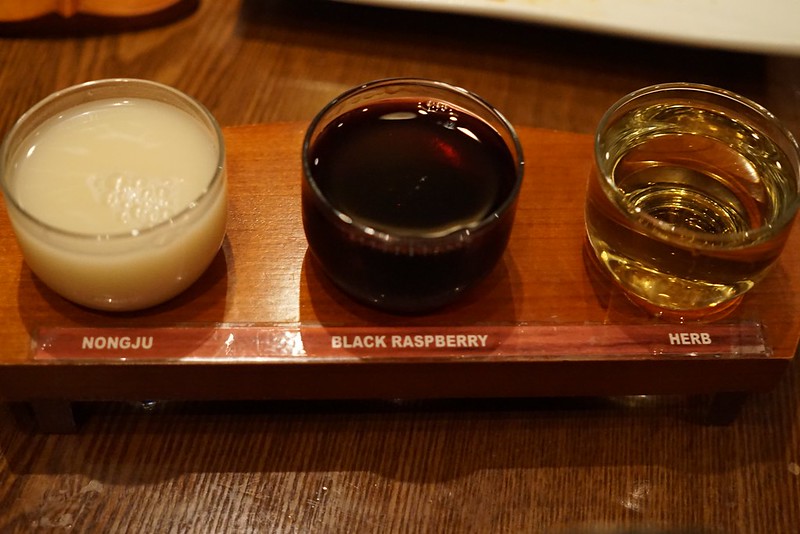 I had food, but lost all interested in taking photos of it by that point. My favourite part was when we left, and it’s probably fair to say that my love of Franchia is quite over. But it’s hard to say how much of that was the actual restaurant and how much of that was the people sitting next to us. On the bright side, our visit did remind me I haven’t been to The Stonebowl Riceteria (Stonebowl) on Eglington West (in Toronto) in a while (so we paid them a visit last week.)

But all was not lost. My partner in (not)crime pulled of a beautiful day in a beautiful city. AND I got to see Nikola Tesla Corner. 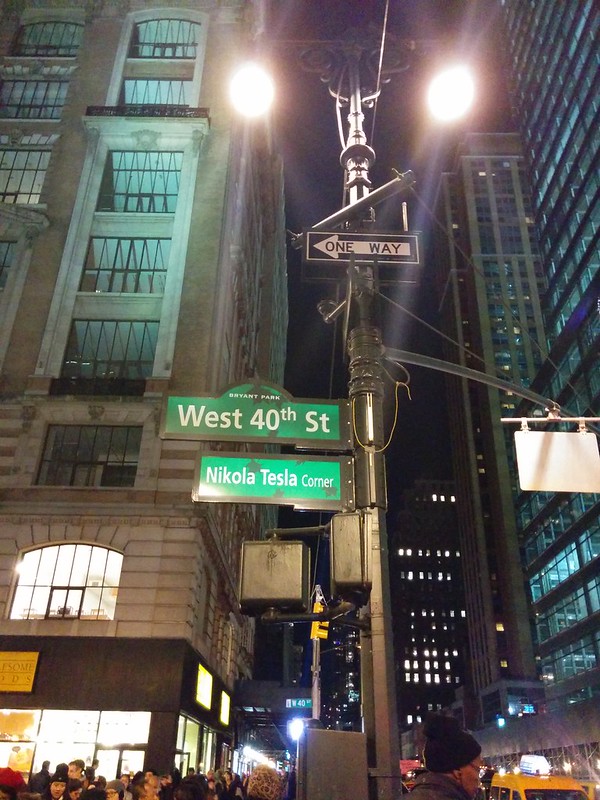 Overall, it was a lovely day, and there were still so many more. Plus I appreciated the combination of pragmatic (Beware Toronto – I’m one step closer to driving a car) and thoughtful gifts (a donation to Cedar Row Farm Sanctuary for a years worth of care for one of their goats.)