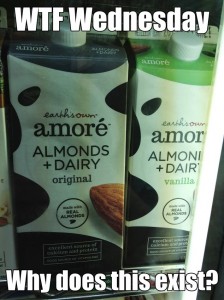 Earth’s Own was a company that at one time made only dairy-free milk products. They’ve slowly been building up a monopoly on most of the dairy-free milks made in Canada and make So Good, So Nice, Almond Fresh, ryza, and also make the Sunrise Brand Soy Beverage, Soyummi non-dairy puddings, and YÜ Organic Rice beverages.

This week they launched a new product, and it’s a product that I find frustrating and illogical.

They launched – Amoré – a blend of dairy-milk and almond milk. Why? Well I sent them a letter to find out, and so did a few friends, and we all got the exact same non-response/(edited to add: crappy response) so I’ll share it with you as well:

Thank you for contacting Earth’s Own Food Company.

With the growth of almond beverages over the past couple of years, we’ve had requests from consumers for a product that combines almonds with dairy. The Amoré Almonds + Dairy product you are now seeing on the shelf is intended to meet the needs of these consumers. To avoid any confusion among our Almond Fresh users, we chose to launch this product under its own unique brand.  Rest assured that our Almond Fresh beverages will continue to be dairy free and lactose free.

We are truly sorry to lose you as a customer. Our goal at Earth’s Own is to offer choices for all consumers, including the 95% of Canadian households that use dairy-based products. We thank you for your past support and hope that you will re-consider your decision.

This feels like a step backward, and I’m not sure who this product appeals to. In their email they say “we’ve had requests from consumers for a product that combines almonds with dairy”  and I’m just wondering WHO ARE THESE PEOPLE? Why wouldn’t you just drink one or the other? I don’t understand.

EDITED TO ADD: The Veganomaly & I were on the same wavelength today. She lays it all out much better than I.