George Restaurant is a fancy upscale restaurant in the Verity/Ivy Hotel building. It features booths and tables, and an open kitchen that  you can see as you pass by on Queen. Last month, JC and I went over there to celebrate the 3-year anniversary of the first day we met.

I didn’t bring a particularly good camera, and I didn’t write any notes on any of these, but I do want to share how beautiful and delicious these items all were while I still have even a fleeting memory of the dishes. Sadly, my good camera is still out of commission, and the camera we picked up as stopgap handles low light even more poorly than a cellphone camera.

JC called George in advance and asked whether they could do a completely vegan tasting menu, they said they could, so he planned our evening there. George does have a lacto-ovo-vegetarian menu on the website offered regularly, and also a note that various dietary restrictions can be accommodated since everything they make is made in the kitchen (including the breads.)

As soon as I walked in the space felt really relaxing, friendly hostess, it was well lit, with warm golden lights illuminating the walls, some overhead lighting, and a generally comfortable atmosphere. The music was not intrusive, but added nicely to the ambiance.

The servers and staff all maintained friendly professional service, and somehow they managed to walk the line of fine dining where the environment isn’t casual, while also not having that pretense of being too cool/too expensive/too trendy/whatever. There were 2-3 other tables, this was a Wednesday night, so that might have something to do with it, as my hair dresser noted that evening, it’s not the usual night people seem to go out. I wondered why they would put us all so close to one another when the place was not that full, but we managed to enjoy at least half of our meal without being disturbed at all.

We opted for the optional wine pairing. I also did not check the wines out on Barnivore before ordering or drinking them. You may want to skip the wine pairing, but I’m glad we did it. The Somellier was a wine nerd, and gave us a nice story about each of the wines, but didn’t tell us why they were being paired with each dish.

JC & I have both had some experience with the building before. I’ve eaten veganized meals at Verity (a private womens’ club attached to George, with food made by George) for events and meetings, and JC and I stayed at the Ivy, a boutique hotel at Verity, the night of our wedding, and had a cold breakfast platter the next morning, but I was curious what a full tasting menu would look like.

So here it is.

We each started with a cocktail. My drink of choice is always something with earl grey/bergamot, or a gin and tonic. So even before I arrived, JC knew I would order the George & Tonic. A new twist on an old favourite. It’s got gin, muddled lemongrass and grapefruit, served with fever tree tonic water. 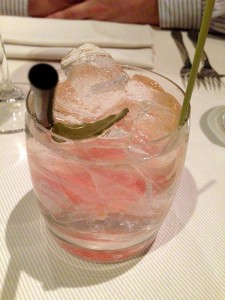 First the chef sent out an amuse bouche – which was much more involved than the bouche amusers we’ve had in the past. A chickpea fritter, surrounded by a citrus and daikon salad. We savored the richly flavoured chickpea cake, and mixed it with the citrus. It really set the stage for what would be a lovely series of inventive courses. 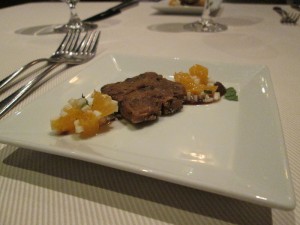 Each subsequent course, JC and I would get a different dish, and a different wine. We’d each finish about half, and switch. 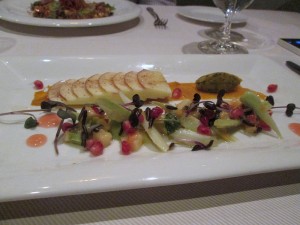 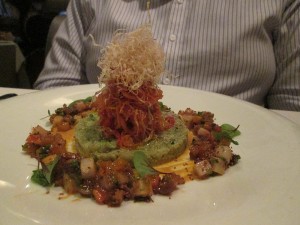 I was presented with the dish on the left, a fresh flavoured salad with unique flavour combinations. It was light, but bursting with flavour (and I don’t think it was just the pomegranate seeds).

When we saw JC’s we didn’t know what to make of it. Of course they introduced this dish, with its layers, and colours, but all I can remember about it now is that the green disk was made of quinoa, and it had a lot of umami flavours. 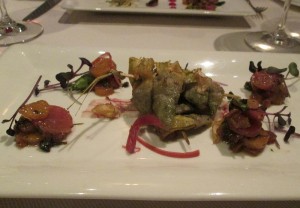 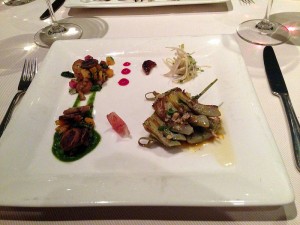 This was two takes on a roasted artichoke. The one on the left was mine and had lemongrass and citrusy flavours. 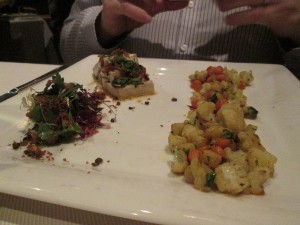 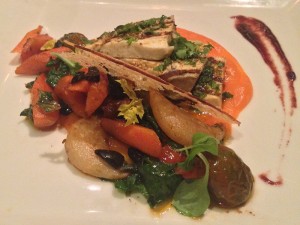 JC’s plate also had grilled tofu, but had a cauliflower spätzle, and a salad of beets and greens. 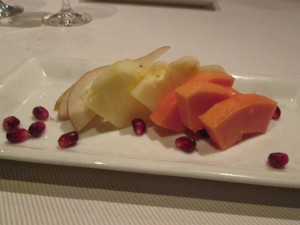 When I saw this plate coming from afar I thought the orange fruit was my nemesis cantaloupe (which I’m intolerant to, but always forget to mention at restaurants.) but I was pleased to see it was the much more awesome orange non-melon – papaya. There was also pineapple, and bosc pear slices, surrounded with pomegranate seeds.

This might seem like a boring course, but it was incredibly welcome, and the papaya and pineapple surly aided with digestion. The fruit break was a nice transition into the very decadent dessert we were about to enjoy. 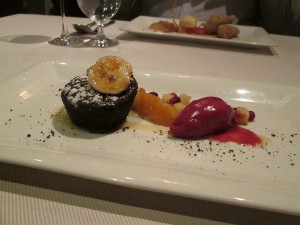 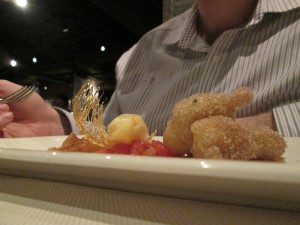 I love dessert. And I loved both of these dishes.

The one on the left was the one that came to me – a brownie with an almost caramelized banana, some orange and apple pieces, with a sweet but tart berry sorbet.

JC got the plump pair of cinnamon sugar donuts and a peach sorbet.

They both came paired with sweet dessert wines.

We had a beautiful night thanks to George and the staff and would recommend this restaurant for special occasions or just because. It’s worth noting that It is not an inexpensive place to dine, but you can decide for yourself if it’s worth it for you by checking out their website/menu. We were thrilled.

As an aside, I was interested to find out that Lorenzo Loseto, the Executive Chef of George Restaurant and The Verity Club, won the Gold Medal Plate at the Canadian Culinary championships this year just a few days ago. It’s always so exciting to eat food from chefs that love creating and innovating.