Sure it’s Vegan MoFo, and this isn’t on theme, but I still have vegan travel & food talk to catch up on.

Earlier in August we went to Las Vegas for a Conference, and stayed for a week. We ate well at several different restaurants around the city, and you can see some of our recent Las Vegas adventures here. One of those places was Panevino.

Panevino is a destination restaurant in Las Vegas. It’s traditional Italian, that also has a “healthful plant-based vegan menu.” Another one of JC’s finds. I hadn’t heard of it, but they appeared to be promoting their plant based options online, so we opted to take a cab over from the hotel and check it out for dinner.

Service was friendly, ambiance was semi-casual with slightly dimmed lights, but no so much that you couldn’t see who you were eating with. It feels like an escape from the frenetic pace of the Strip, take your time, eat slow, eat well.

First thing we noticed when we opened the menu – the vegan menu card was right up front. No secret vegan menu here. You can also take a look at the plant based menu on their website. Here is the Dinner Menu. Our server brought us bread, and someone else did a little olive oil/balsamic vinegar demonstration with extra flourish.

JC started with the Eggplant & Artichoke Bruschettone. Which I had a bite of, but formed no opinion on other than it was delicious looking and was full of really great veggies. 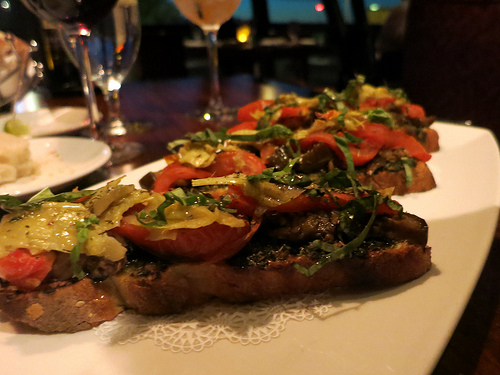 I started with the vegan caesar salad, which dare I say it… I enjoyed more than the (also very tasty) caeser salad I had at the Wynn’s Sinatra restaurant earlier this year. Flavour-wise it was similar – but oil free – (which is not actually a selling point for me – but in spite of this, it was not lacking in rich flavour). I liked that the hearts of romaine lettuce were cut into more reasonable sized pieces for me to eat as opposed to large spears. They make their own “parmesan” cheese (reminding me a little bit of the flavour and texture of Parmela) and focaccia croutons, both of which were great. For mains, I had the Whole Wheat Shells in a Creamy Vodka-tomato sauce. Which were good, but not saucy enough for me. But I’m not saying the sauce was inadequate for the shells, just that it was so tasty I wished there was more of it. Full disclosure: I’m not typically a fan of whole-wheat pasta (that texture). Most (possibly all) of their vegan pasta options involved whole-wheat pasta, I assume because they wanted to cover all of the “healthy” bases. If I would go back again, I’d really like to try the spinach tortelloni. JC won at dinner. It’s not a contest, I know, but his Ricotta and Spinach Gnocchi were my kind of dish. Though they’re not “gnocchi” in the traditional sense of dense dough (they didn’t seem to contain dough at all), they were still fantastic. Drenched in a basil marinara sauce (the sauce you can top it with is choose your own adventure, but when asked our server recommended just the marinara – she was right) Finally, we debated having dessert.

Our server told us they had a little vegan Italian apple almond cake thing they were featuring that night. Since I always feel compelled to try “The Special” when I see it, I did so this time too. It was a dense pudding-like cake that was not my style. I like my cakes with a bit more leavening.

JC ordered the Chocolate Gelato, and it was great, and creamy and a decent end to our meal, It’s a nice place, near the McCarran International Airport, and suitable for adamant non-vegans.