On my most recent visit to Edmonton (earlier this year), I had the opportunity to visit Arcadia, which is this great vegan bar just on the new fun street of 124. Over the past few years, 124th has really expanded in terms of vegan offerings, starting up with Clever Rabbit, and one of the first homes of Sailin’ On Vegan Food Truck (at the 124 Grand St Market.) 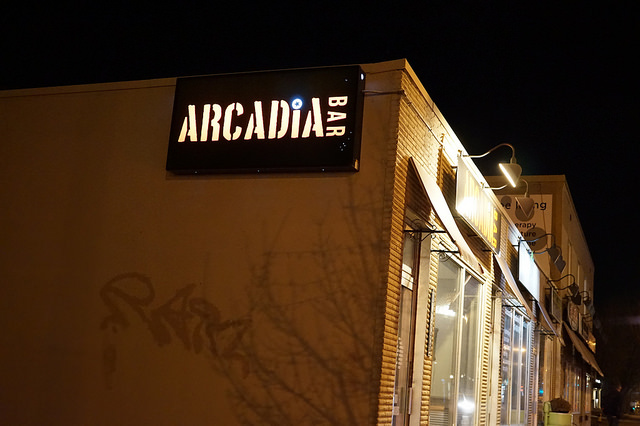 So Arcadia has since expanded their menu from the night I was there, but luckily, they still have the incredible sandwich I had. The Green Onion Cake Donair. I’ve had a hard time conveying to non-Edmontonians what a “green onion cake” is, and why it’s so special. Most of the time in my travels and everywhere else, I’ve encountered a thin pastry like scallion/green onion cake similar to a paratha.

In Edmonton it’s more of a salty doughy cake with diced green onions in it. It’s not flaky. It has a good density. There is such an obsession with these delicious cakes, there is even someone living in Edmonton with the GreenOnionCakes.com domain, that started a petition trying to make it the official dish of Edmonton. 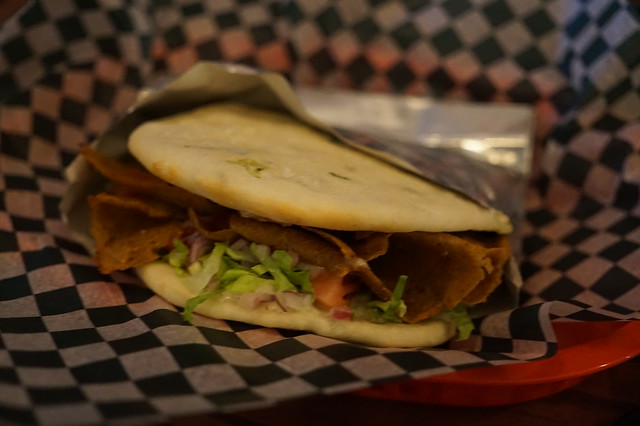 So, take a couple of large green onion cake, and add thinly sliced seasoned seitan donair, pour in some garlic sweet sauce, lettuce and tomatoes, and turn it into a sandwich. Brilliant. I don’t know how I feel about baked green onion cakes vs fried ones, but this sandwich totally worked out perfectly.

Some of my Edmonton friends bailed on me on my night out, so they didn’t get to enjoy the awesomeness that is Arcadia with me, but luckily I ran into Sarah Louise Ms. Cozy Vegan and her pals. It was fun hearing about what’s new in Edmonton and the food scene. She’s also the mastermind behind Blue Rose Vegan Bakery as well as their phenomenal YEG Vegan Snack Attack packs.

Since I visited – Arcadia expanded to include a very nice looking brunch menu, and then put the brunch on break. Pay attention to them, they’re doing good work. I couldn’t help but feel as though if this spot was open in Toronto it would totally be packed every night. Check out their menu, pay them a visit, and see for yourself.