As a special surprise for JC’s birthday I wanted to take him out for something he’s never done before, and after the camping and the driving, it seemed a nice fancy experience would be just the right thing as a treat.

I emailed The Peninsula Hotel and The Lobby a few weeks ago about their vegan afternoon tea offering, and what would be on the menu if we went. They kindly sent over a PDF and asked if I wanted to make a reservation. I did! 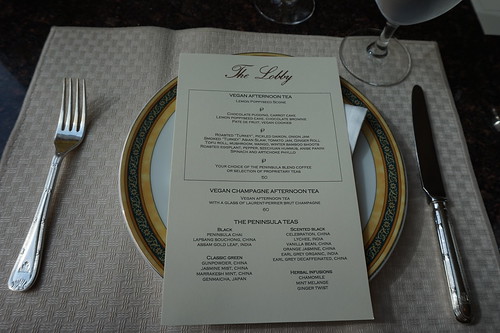 After a lovely day admiring the works at the Art Institute of Chicago, we made our way over through the Magnificent Mile, and on to The Lobby inside The Peninsula Hotel.

It’s beautiful inside and service is semi-formal and friendly. It was nice that when I mentioned only being interested in the vegan menu when I made the reservation, because we got to skip the menu shuffle that has occasionally happened when we’ve gone to a restaurant that has a vegan menu, but who’s staff aren’t particularly enthusiastic about it. That didn’t happen here, and I can’t say that it would, because everyone was great. 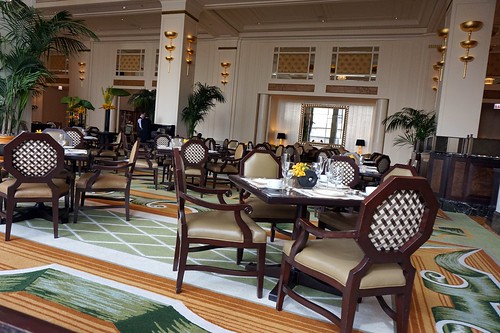 Save for five tables or so, we had The Lobby to ourselves, so I could actually take a picture of what the place looked like without taking pictures of strangers. Most people were in booths or by the window like us. 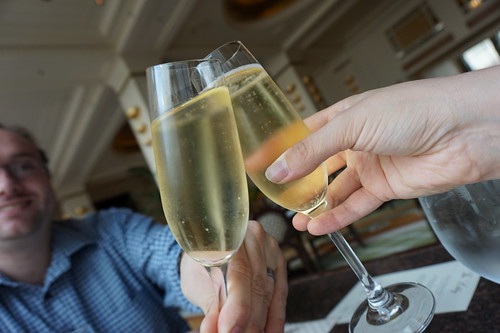 We started with celebratory glasses of champagne, and enjoyed the view out the window as the staff prepared for dinner. Happy birthday to my favourite person!

When you sit down to the table you see a place setting and a tea strainer. We wondered if we needed to do anything with it. (you don’t – your waiter will take care of it, at least the first couple of times.) 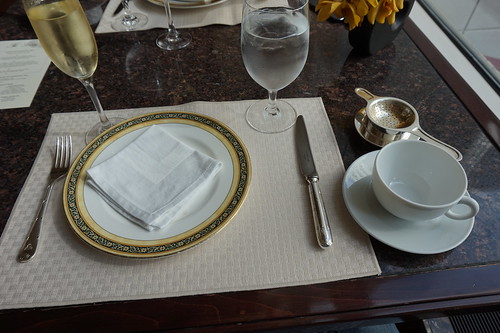 I ordered the pot of Peninsula Chai, my logic behind it is that it’s always nice to try a places “signature” tea, as it was at The Empress in Victoria too (the first and previous time I’ve gone for any kind of high tea/afternoon tea.) It was a sweet and spicy black tea as the name would imply. 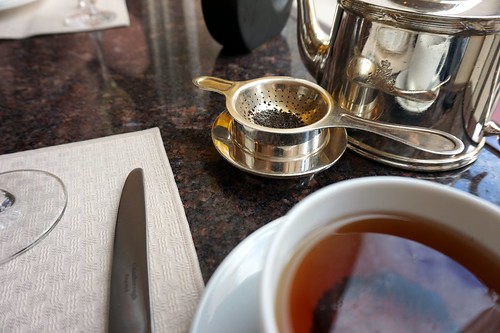 JC went with the lapsang souchong, a smokey black tea, with a smell that reminded me of a blend of old leatherbound books, aged whisky, and some kind of rich mahogany bookcase. As a fan of old smokey alcohols, JC was a fan of this tea. For me, I didn’t mind stealing a sip here and there, but I was very happy with my chai.

The waiter asked us if we wanted honey for our tea, maybe out of habit, maybe as a joke, but he somehow managed to turn it into something funny when I paused before answering. I’m mentioning this mainly because it feels so rare that someone can make a properly playful joke related to non-vegan things, and some servers have just ended up making awkward jokes that end up being a little mean. Not here. Kudos for real. I generally don’t take sugar or any kind of sweetener for my tea, so it’s always been “no thank you” to that stuff anyway.

Soon our waiter brought out our tray of finger sandwiches, scones, and desserts with preserves. We we thrilled. 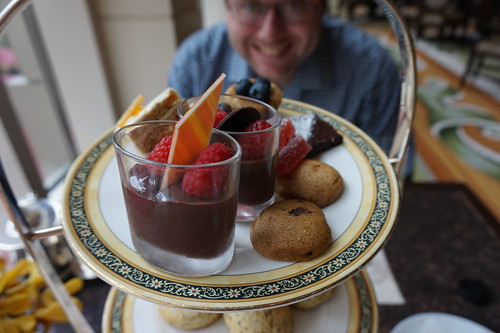 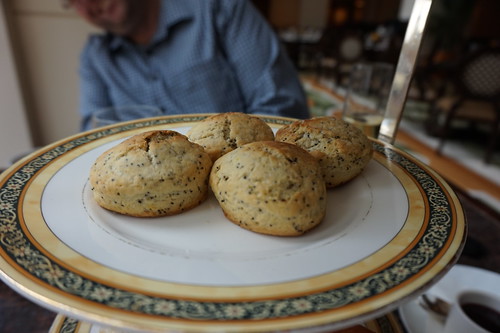 Lemon Poppy Seed Scones – these seemed really hard on the outside, but once we sliced through them they were great with a light lemon flavour and a whole bunch of poppy seeds. the in house jam was a perfect flavour pairing. 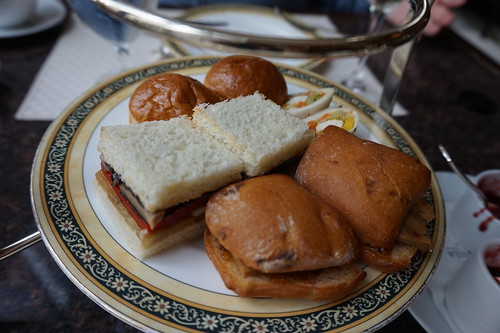 They also brought over another plate of these for us. So if you’re still hungry… you could always ask (truth be told, we weren’t really hungry after all of these things.)

And as a super nice touch, because I had mentioned that we were going to be celebrating JC’s birthday, our waiter brought over this lovely plate of sorbets with birthday wishes on it. Such a nice surprise for both of us. 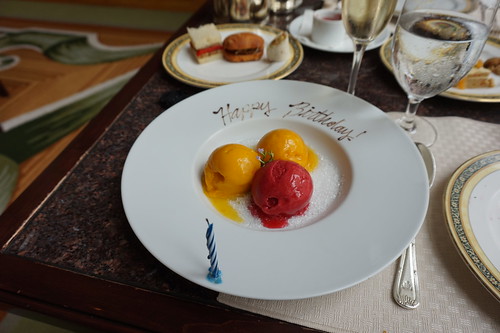 Ultimately, if you want a unique experience, the opportunity to drink some great tea, have little bites that collectively fill you up I really recommend you check out the vegan afternoon tea at The Lobby. We left with big smiles on our face, and I’m so glad we made the time to do this.