After a lovely day of exploring Chicago’s Magnificent Mile and a wonderful meal at The Lobby, we planned a more casual day of wandering around for our last full day in Chicago. First stop – Upton’s Breakroom for lunch and the Ukrainian Village & Wicker Park neighbourhood to look around.

It was the first time we took a bus in Chicago. Those magic Ventra transit cards are pretty great (at least from a tourist perspective) – multiple forms of transit, one pass. There is probably a better way, especially considering how hot that day was, but it worked.

We walked for about 15 minutes and just as we started to wonder if we’d missed it somewhere along the way, we saw the newly added Upton’s Breakroom signage, and wandered in. 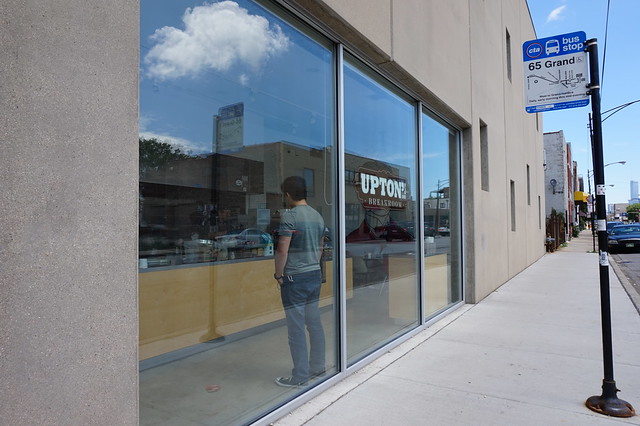 We ordered a whole bunch of delicious stuff, and as we ate, it became apparent that it was (at least unofficially) the breakroom of the attached Upton’s Factory as folks from inside came into the place for lunch or a snack or a break or a drink. 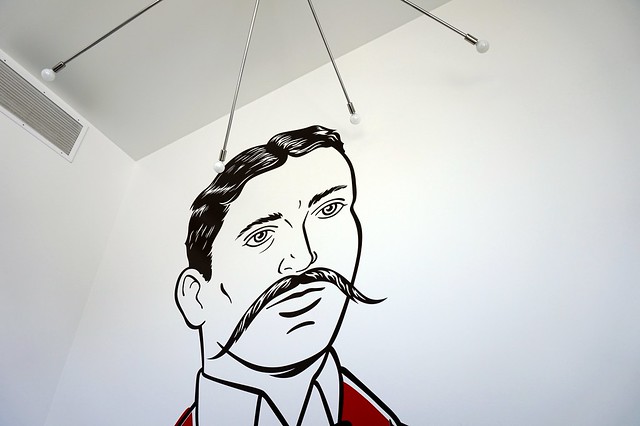 I’ve eaten Upton’s Breakroom products stuff before in the early days – probably at their popup sandwich shop at Food Fight during the first Vida Vegan Con, but more recently we’ve sampled their prepackaged goods at Whole Foods locations in the North East/North Central USA (like in Michigan, Illinois, Minnesota.)

While these prepackaged goods are totally tasty, as you might expect, they don’t compare to the fresh stuff, so I’m so glad we made a point of visiting Upton’s storefront. 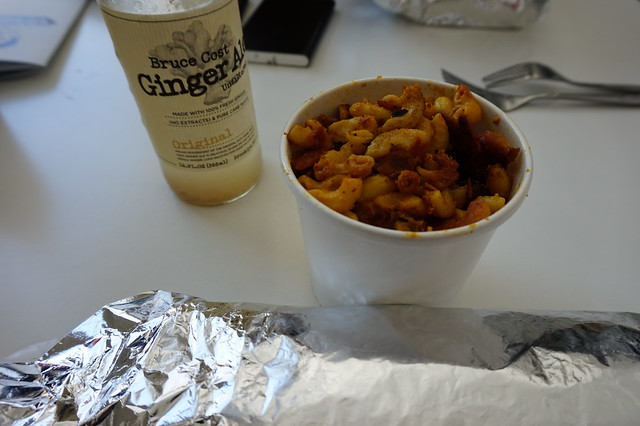 JC and I shared an order of mac & cheese, which was awesome, and of course so much better fresh and hot. Totally worth another order if we’re in the neighbourhood again. 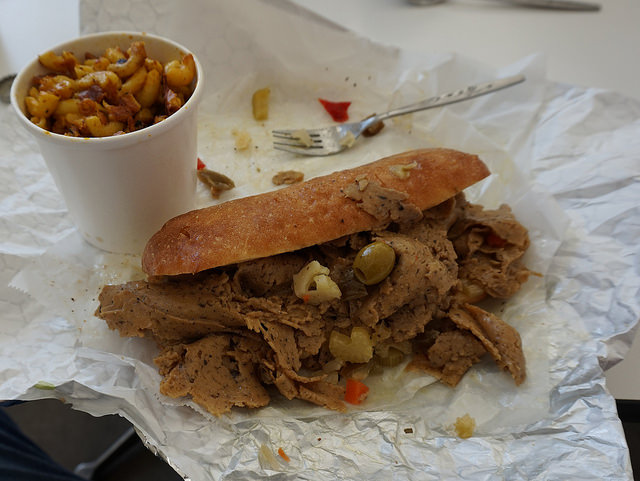 JC ordered a sandwich – the Italian Sandwich. Meaty, flavourful, and so filling. I think I stole a bite or two… 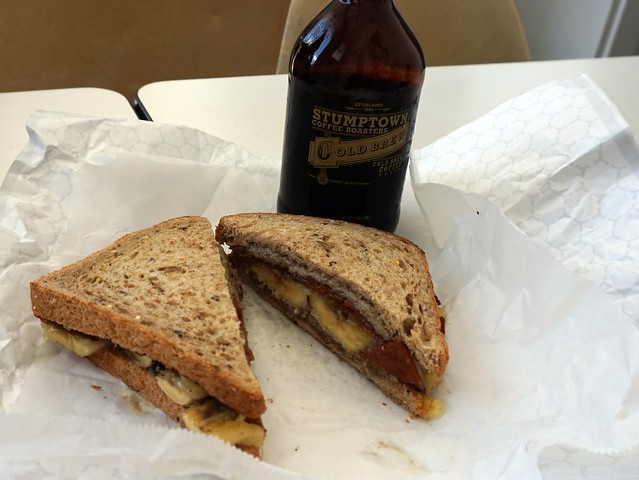 Continuing my long time love of nut butter sandwiches, I had The Elvis. It was a warm sandwich with upton’s thinly sliced not-bacon seitan, sunbutter, and a grilled banana on multigrain bread. I would probably happily eat this or something like this everyday. 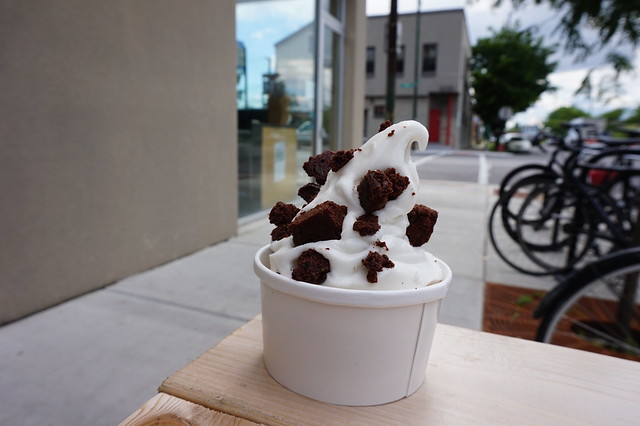 We finished things off with two sundaes – made with Chicago Soy Dairy Temptations soft serve mix. I feel as though I’ve been collecting a hierarchy of vegan soft serve in my head, and this one is a contender, and obviously I liked it because I ate the heck out of this, but it isn’t my favourite. It’s just a touch more icy than creamy.

What I did really like that they had a variety of toppings available – this has chocolate lavender cookie pieces. But if you’re feeling fancy they’ve got banana splits too.

Afterward Upton’s we walked over to the Polish History Museum hoping to check it out, but it’s not really a museum you can walk around in – we rang the intercom for someone to let us in, but no one answered – so that was a bust.

We started walking down Milwaukee Avenue hoping to find more Polish stuff (since I’m Polish, and JC is a little Polish), but we might have gone in the wrong direction for that because instead we stumbled on some random fun little (non-Polish) shops, one of which was The Boring Store. 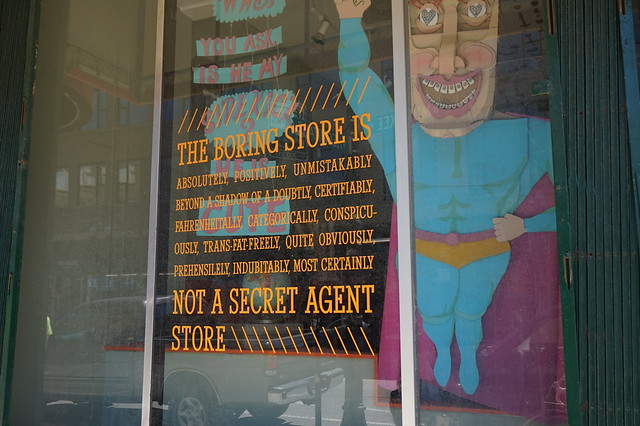 What at first looks like a Secret Secret Agent store, is much more. They’ve got lots of little fun toys and games and books and mugs, so you might not even realize it – but The Boring Store is also home to 826 CHI, a non-profit writing and literacy center. They also have 826 Chicago student writing available for sale in Zine form. It was also pretty great to discover 826 was a national organization promoting writing and literacy all across the USA. The Boring Store was on Milwalkee at the time we visited, but had signs saying they were moving (and changing their name.) You can check out 826CHI Forward for updates on their move.

Another amazing stop sort of within walking distance of Upton’s is the incredible Quimby’s Independent Bookstore. It is full of books, zines, magazines, and more. But I was there for the zines, and felt like a kid in a candy store (or a zinekid in a zine store). They had a fantastic variety of zines from local Chicago authours, perzines, compilations, collections, old zines from decades ago, new zines, in every imaginable category and format. If you like zines at all, definitely make Quimby’s a priority stop. 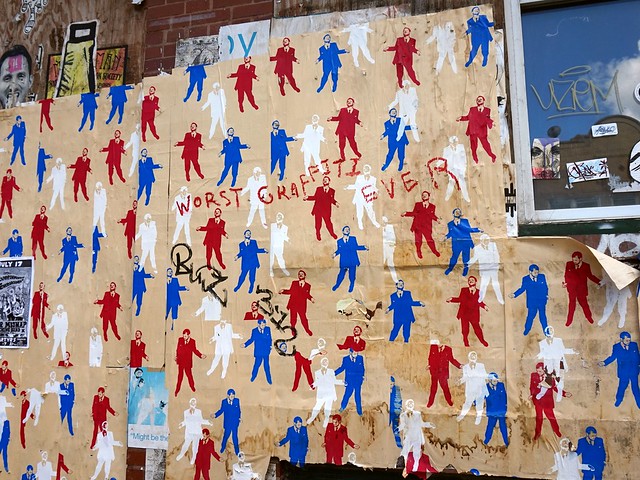 This was our last full day in Chicago, and we spent most of it walking around Wicker Park, enjoying the cafes and street art along the way. Upton’s was a great start to the day and a nice starting point for our day of exploring.