It’s time for another edition of navelgazing Thursday, except it’s happening on Friday.

Do you know what I realized this week? (Okay, I already know this) I like JC a lot. Which is good, since we’re getting married in a mere day over a month now. He was away for a few days, and while, it was nice that he was still on a similar timezone, and I’m quite content being by myself (albeit sleepless) – it’s really really great to have him back home.

I like that things are coming together for the wedding. Reply cards are being returned. By Mail. Which I LOVE. Frankly, I’m just glad at least some people have received invitations. Every time our mailman comes, I’m curious if another little envelope will appear (subliminal message here: Send back your RSVP cards people!!!) It’s actually kind of funny – some people in Warsaw, Poland have gotten their invites – but my parents in Edmonton, Alberta, have not.

Of course, this is in no way a slam against Canada Post, though perhaps it is one against my Parents’ Mail Carrier (as others around the country have already gotten theirs.) I’m simply impatient.

I love that when I went to the big Polish store on roncy today I stumbled upon something new to me (while at the same time being old to me) and vegan. This is the “Sauerkraut Stew,” it’s also known as bigos, aka “Hunters stew”. And traditionally, it contains meat. 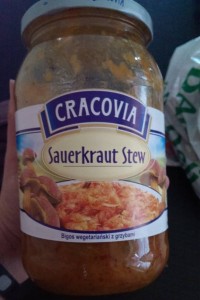 But here it is, if you read Polish and tiny print you will notice it says “Wegetarianski Bigos z Gzybami” which means vegetarian bigos with mushrooms. I had it for lunch this afternoon, and while my mother’s stew is still better (as mother’s cooking often is), this will act as a very convenient occasional taste of home.

Drop in Dinner at the Dep I like that tonight JC and I went on a little date over to The Depanneur and had some delicious Jewish Vegan Deli cuisine, as prepared by Pear & Pepper’s Emily Zimmerman. We ordered one of each of tonight’s sandwiches, and the beet soup, and the dessert.

It’s usually a good idea to just get the whole spread. I liked them both, but was surprised that I liked the okrara tuna melt even more than the ruben, but both were pretty awesome. Emily mentioned the seitan was based on a recipe by Taymer Mayson, and I think it’s probably a good time to pick up Taymer’s book. 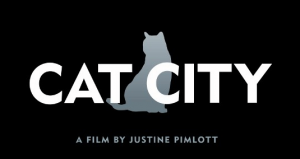 I love that the Toronto Feral Cat Rescue is screening Cat City on Thursday September 19th, at the new Feral Toronto Recovery Centre. You can find out more about it at the facebook event.

There is also a screening of Forks Over Knives coming up at Revue Cinema, and the best part is it’s one of their food and film events AND the  food sounds interesting. For more information, check out the Revue Cinema Website. It’s also happening on September 19th.