I’m on a train to NYC (magic of internet!) 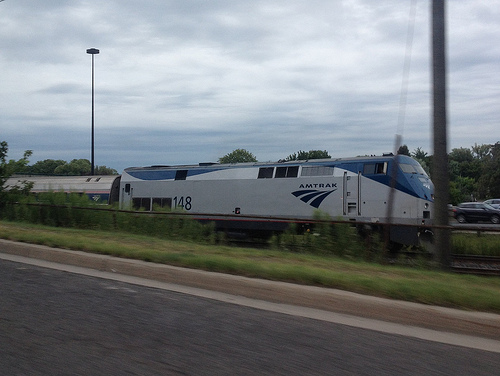 Since returning home from Las Vegas, the last few days have been a frenzy of activity, where we got a few things taken care of for the new house, amongst other things. But most of that was really time spent waiting for installers (that didn’t show up), repair persons (that didn’t actually fix anything), delivery folks (that brought us a nice new bed frame!) and cat sitters (that were lovely). So, a little bit of good, a little bit of bad.

What I’m really excited about is that VeganMoFo registration has opened up, and you might want to join up if you haven’t yet. I’ve had a lot of fun in past years, and I like how a lot of people have done themes for the month, and since I’m getting married in October, I’ve opted to do an entire month of wedding themed posts in addition to other stuff I feel like posting that month. Hopefully people can make use of some of our planning experience.

Now were heading to NYC, and, other than just being happy to be heading down there for a little while, I’m also pretty thrilled that’ll I’ll get to check out the Vegan Shop Up while we’re in the area. (It’s happening tomorrow!)

I’m especially excited about trying Lagusta’s Luscious Chocolates. We had been talking about paying a visit to the shop in New Paltz, NY, and we still might, but it’s nice to have the option to get some of this stuff a little closer (since they do not ship to Toronto.)

This was also an interesting opportunity to discover that Amtrak Acela has a vegan burger. Less awesome was that they sold out right before I got to the front of the line. We made up a salad from the thankfully cheese less garden salad Amtrak sells, and topped it off with some of the grilled Beyond Meat not-chicken we brought with us (After picking up three containers in Las Vegas).