I’m vegan because I love animals – where animals include humans – as well as everyone else in the animal kingdom. As a bit of forewarning, this is going to be a sad post. Loving animals isn’t always easy, and often it’s hard, because animals don’t live forever. And I wish this story had a different ending. But so it goes.

We started fostering a cat just a bit over 6 months ago. We decided to call her Martha after a cat from JC’s childhood.

#Cat transfer from @xfreeshrugsx complete. Here is Martha. I’m hopeful we will have lots of sweet photos to share eventually, but this is the beginning, and I always forget to take a picture of the beginning. Martha has had a tough life. She will not have a tough life with us. & hopefully when she is ready, she will be able to find a lovely forever home. But right now she has a warm house, and lots of beds to choose from, food, and hiding spots. Thank you to @xfreeshrugsx & her friends for caring and rescuing Ms. Martha Housecat out of the middle of icy frozen nowhere. #rescue

We didn’t know much about Martha at first – we knew she was declawed, she had been left alone in a field outside of the city, we knew that she had chewed her way out of the plastic and metal kennel she was left in, we knew that she didn’t trust people much and was wary of strangers. She wasn’t grateful to her rescuers or the vet that saw her at her intake exam, and I can’t blame her for that at all. Removing matted fur can be painful, getting touched when you’ve been on your own for a while can be jarring, her teeth hurt, and it’s hard to explain what was going on because we lack a common complex language.

Over time we learned a bit more about her as she warmed up to us, she realized we were worthy of being trusted. And how beautiful that is. We were worthy of being trusted. She was curious and playful. She liked sitting on laps. She had a favourite chair that she would curl into with a great view of the window and the door. She didn’t like other cats much, but recognized that our house had cats, and she didn’t have to like them, but they’d have to coexist for a little while. She liked JC more than she liked me. She refused to eat wet food, preferring dry food only. She loved fluffy blankets, and sitting on couch arms. She liked hanging out, but didn’t like being picked up. 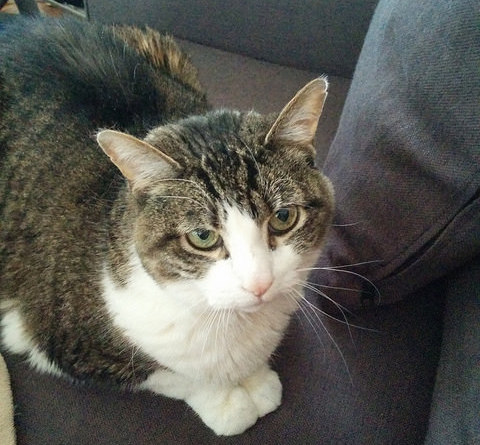 As with most rescues, I wish we could have known her story from before. How did she end up in that field? Was she forgotten by accident? Was her family kind? Caring? What was her name before we decided to call her Martha? She liked being called a “sweet kitty,” I wondered if it was because of the tone of my voice or if it triggered memories of better days before. We will never know.

What I do know, for certain, is that she was loved by us. We absolutely loved her, and she wasn’t just another foster (of course, none of them ever are “just” a foster in this house), but she was part of our family. However briefly. She lived here, and had a favourite chair, and that chair will likely always remind me of her. She was loved by countless kind internet strangers. And the people involved in the rescue organization that saved her from the field in the first place.

Yesterday was a hard day because we had to make a tough decision. She went in to the vet for what seemed like desperately needed dental, but instead, we found out she had what appeared to be an advanced tumor in her mouth, which had grown aggressively since her last visit. After giving us a few options to choose from, including chemotherapy and palliative pain treatment, the vet recommended euthanization, citing generally negative outcomes of this particular cancer – even when treated. After talking it over with some of the folks involved in her rescue, we all decided that would be the kindest choice for her. Even though it felt awful.

JC and I were with her in the room, and we pet her and showered her with love until her very last moment. I feel like she knew that we loved her and cared about her, and I think there is something important and meaningful about that. She was not a former housecat left alone in a field to fend for herself, she was part of a family. But still it was hard, and we miss her. Several times in the last 24 hours I’ve felt the urge to check on her, only to remind myself that she wasn’t with us anymore. It’s a weird feeling.

So I wanted to share a bit of her story and say goodbye.

And I don’t want sad news to dissuade you from fostering or helping out at a rescue or shelter. That’s not what this is about. If anything, I want to convey how important it is that if you have the time or inclination, how beautiful and rewarding this can be. You can make a difference, even briefly, in the life of a cat or dog or goat or cow or guinea pig or hamster or person or a someone – if only you want to.

Anyway, as with all rescues,  All Creatures Rescue could use your help.  Their wishlist is on their facebook page so if you were ever interested in donate supplies or money or time I’m sure they would appreciate it. Or any rescue at all. They almost always need help.