Thai food has always been one of those foods I gravitate towards – especially being vegan. Yes, everyone talks about hidden fish sauce, but it doesn’t happen often, and from what I’ve been able to tell most of the time when I go into a restaurant people have been honest with me (even if it means they lose a sale.)

We live near High Park, and a relatively short walk away from Roncesvalles, which has a couple of vegan friendly Thai restaurants (The Friendly Thai and Thai Chef Cuisine) and since moving to the neighbourhood we hadn’t branched out much beyond those familiar two.

One evening I walked by The Thai on Bloor from Keele station. It’s one of those wonderful stumble-upon a place on foot experiences that are so rare with the internet dictating so much of my eating habits these days – but The Thai had a big chalkboard sign outside, and one of the items was “Vegan Options Available.” 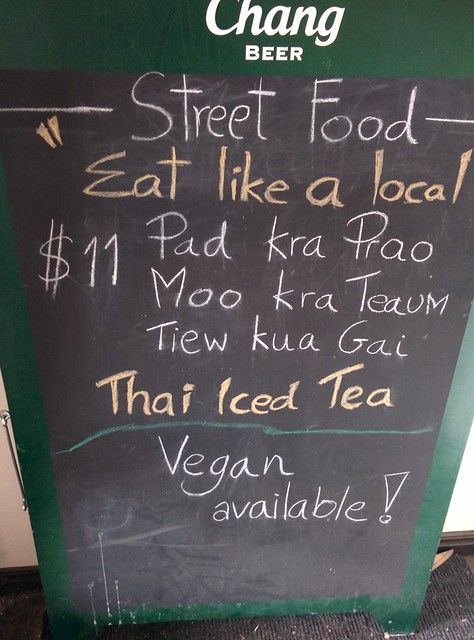 Just this line was enough to make me feel optimistic, they used the V word, but looking at the menu got me feeling excited. A whole glorious vegan page of dishes, with some meats even. I put The Thai in my mental “To Eat” list and moseyed on my way home.

Finally, a friend and I paid them a visit for the first time a month ago, I had the Spicy Curry Soy-Shrimp. It’s meant to be eaten with rice, but I skipped that so it didn’t seem like much food (what I’m saying is, you should probably get rice with this.) 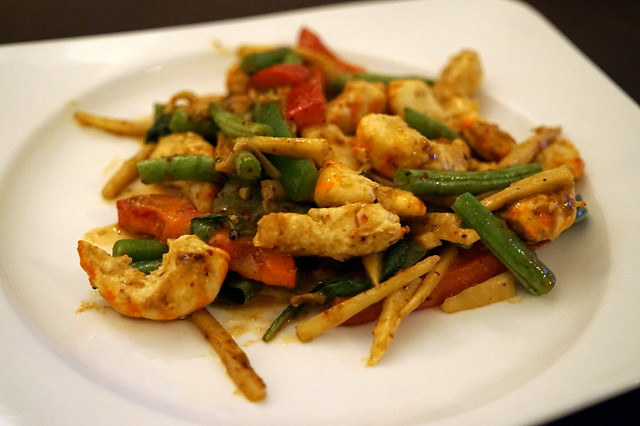 I didn’t find it spicy (but I don’t usually find anything spicy), but it was full of great flavours – with red peppers, long bean, bamboo shoots, and basil leaves.

More recently I went in by myself. I started walking home from Keele station again, and decided to stop in for dinner. JC was out, it was raining, and I didn’t feel like cooking myself anything for dinner, so it was nice to have a tasty local option right on my way home. 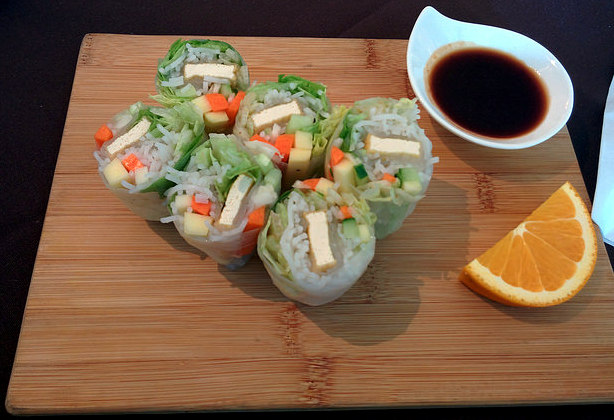 I started with an order of vegetable salad rolls – which had vermicelli noodles, lettuce, carrots, tofu, cucumber, and a peanuty dipping sauce. They’re not actually in the vegan section of the menu (they’re in the appetizers) but I asked my server if there was anything not vegan about them (she said they were okay!) 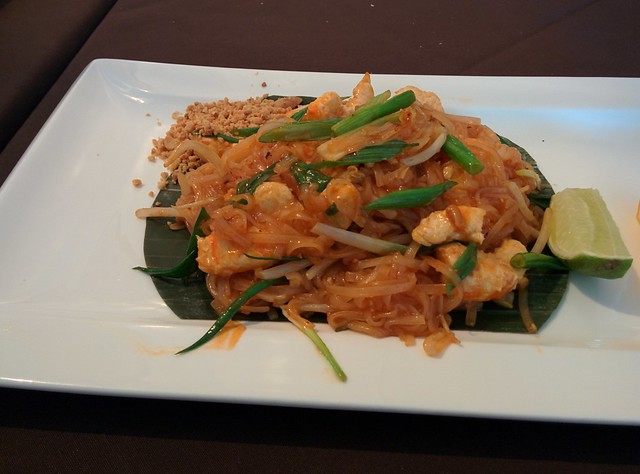 For my main, I ordered the the Soy-Shrimp Pad Thai which was tasty – and perfect for someone that likes nutty slightly spicy flavours and noodles. I would probably happily eat this same dish without the soy shrimp, but it was nice for a change to have a bit of a different texture in a vegan pad thai dish (vs. the tofu I’m used to.)

I’m looking forward to going back sometime and either getting delivery, or eating the vegan tuna fried rice (as it comes highly recommended.) But either way, I’ll definitely be back.

Have you ever visited The Thai on Bloor? What did you think? What’s your favourite vegan-friendly Thai spot in Toronto?