Thursday evening was FoodShare Toronto‘s annual Recipe for Change fundraising event, and the third time we’ve gone. It’s one of the food related fundraisers I look forward to every year, and we had a lovely night. It’s great to support the food literacy work that FoodShare does, while also having the opportunity to try fantastic food from different Toronto Chefs in one place.

There was a slightly different seating arrangement this time, a few more regular/lower tables versus the high top tables more suitable to standing around, which is probably a positive change, even if not more useful to me personally. It was also quite a bit brighter inside than last year, which meant for slightly better photos, and everyone was a lot more visible.

For me, a couple of the standouts this year were several of the ones that were labelled vegetarian and were actually vegetarian/vegan rather than some lacto-ovo-veg thing. 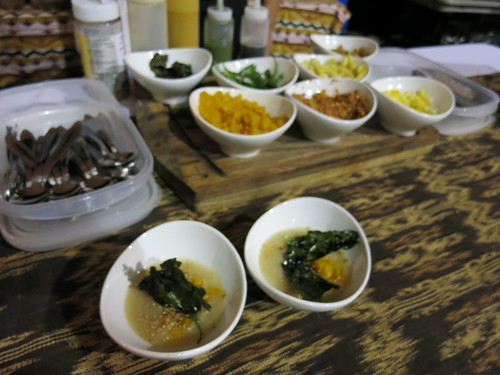 I really loved the Arroz Caldo from Lamesa Filipino Kitchen & Chef Rudy Boquila. The Chef said it was like congee, which make sense since Arroz Caldo could be translated as “rice soup”. So comforting and delicious. I went back for seconds. I asked about vegan options at the restaurant, and the Chef said that while their menu varies, they usually have something. We’ll have to visit! Sang Kim of Windup Bird Cafe (and Yakitori Bar & Seoul Food Co, and a whole lot of other cool stuff – Check out his TEDxYouth Talk) prepared a Tofu-Avocado Gratin and Sweet Potato Mille-Feuille. Which was one of those things I wouldn’t have even tried it if not for the conversation between a stranger sharing our table, and a friendly chatty neighbour at an adjoining table. (You can even watch the Chef prepare this dish online here from his appearance on Breakfast Television) The fine folks at Urban Acorn, Chef Daniel Holloway & Marie Fitrion, had a very spectacular Accra & Banane Pezé. Or rather, I assume it was spectacular because it was delicious, but I’ve never had it before. Accra is made of grated malanga (a yucca-like or taro-like root) fried to a deep bronze. It was topped off with pikliz (pickled cabbage) and banane pezé (fried plantain), and we definitely went back for more. I’m left wanting to learn more about culinary traditions of the area and Haitian vegan possibilities. 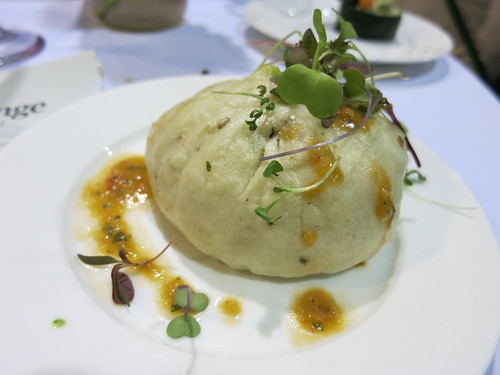 A chef familiar to us from last year was Bashir Munye of My Little Dumplings. He made a very tasty and fluffy Mushroom Bao. You can find him at a few farmers markets around the city, especially during the summer. He makes such a wonderful variety of dumplings, and many of them are vegan. 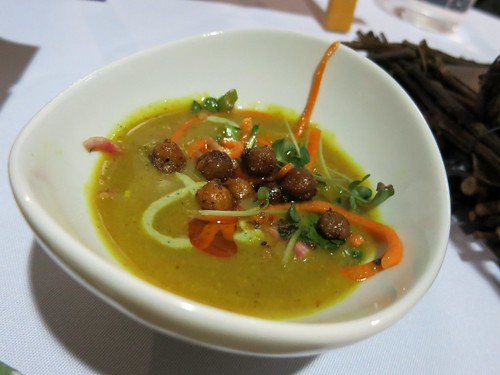 The first thing I actually ate when I got in was the Moroccan Inspired Cauliflower Soup with Crispy Chick Peas, Pickled Vegetable Micro Salad & Tahini Drizzle from Chef Therese De Grace of Good Earth Food & Wine Co. It was warm and yummy, but my favourite part was that it was so colourful. Goodness knows there is nothing I like more than eating something beautiful. 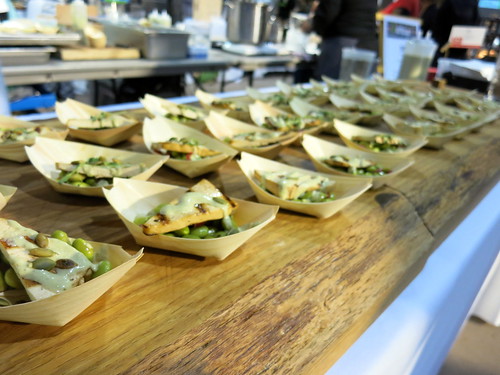 Chef Jeff Dueck from FRANK at the AGO was showing off a Grilled Tofu and Edamame Salad, Pipian Sauce, Coriander Sprouts in a Palm Leaf Boat. He told me that they have vegan options on menu at Frank at the AGO, which is nice to know, since a visit to the AGO (Art Gallery of Ontario) is long overdue. 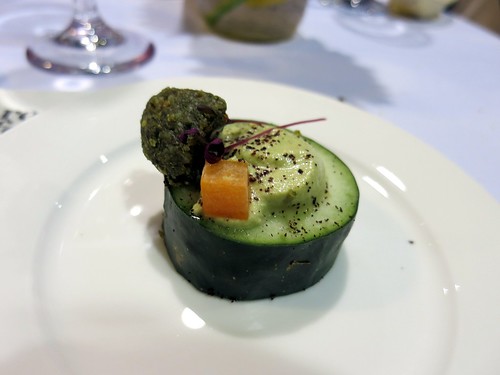 The Belmonte Raw crew and Chef Carol Belmonte were there with Cucumber Cups filled with zucchini hummus and topped with Raw Pumpkin Seed Falafel. I’m a bit of a sucker for zucchini cup based food, and I really liked how fresh and colourful this bite was. I have had their juices and soups before, but still have not been to their Leslieville location. Someday (what can I say, I rarely go east of Spadina these days.)

FoodShare Toronto also showed off a bit of the cool stuff they’ve done in the last year, including this 16,000 sq ft School Grown Rooftop Garden at Eastdale Collegiate:

Find out more about the School Grown program.

I’ve said it before but I’m really into the work that FoodShare Toronto does in the city, especially when it comes to teaching kids how to cook and prepare food, their work on school garden projects, and their fantastic Field to Table school programs and workshops. If you haven’t ever seen it yet, take a look, you might just learn something too!

Thank you to the Chefs and FoodShare Toronto staff and volunteers for another wonderful night. Till next time!