I haven’t been to Montreal in a few years, but I spent a month or so there in the summer of 2008 and remember it fondly. Had I not been in university at the time, I would have moved there. It had a vibrant nightlife and cultural community, the food and people were lovely, the parties, the weather (of course… I was there in summer!) and the festivals, just made me feel at home.
Unfortunately, my ability to speak French is lacking. 7 years of schooling (two of those at the university level), and while I can understand a conversation, I don’t feel comfortable participating. Anyway. In Montreal, while the primary language is French, you can get by with English and not have much of a problem.

I’d like to head over to Montreal in a few weeks, so I might make use of this little guide for myself. The vegan options are amazing and there is always something to do. Merely walking down a street can be interesting since Montreal is full of old architecture and very taleneted graffiti artists! You might occasionally get the feeling you’re in Europe (especially if you head over to Vieux-Montreal). I know I did. The Old City in Poland really comes to mind.

Resources and sites to check out: Transit
Society in Motion (English)
One day pass is $7.00 and a three day pass is $14. The Metro(subway) is a great way to get around. I never took a bus in Montreal but the website’s trip planner is extremely helpful.

A Few Places to eat
These are listed in order of awesomeness (albeit my opinion of awesomeness). I will definitely be paying a visit to Pushap and Aux Vivres next time I’m in town. Because those two were my favourites.

I did not get the chance to visit Crudessence, there are a few locations:
The 105 Rue Rachel Ouest, Montreal, QC location is great because it’s close to Mount Royal Park (Parc Mont Royal), where if you feel like going for an after dinner walk, you can see a wonderful view of Montreal. More about the park later.
The 2157 Mackay, Montréal, QC location is great because it’s close to the Montreal Gallery of Fine Art (Musee des Beaux-arts de Montreal) and also near two Metro stations (both on the Green line – Peel or Guy-Concordia.) More about the museum later.
There is also a juice bar at 1584 Laurier East av. if you’re into that. Which I’m not.

Aux Vivres (4631 boul. St-Laurent, Montreal, QC) is the one restaurant I recommend to anyone going to Montreal, vegan or not. Every entree I had there was fantastic, but most expecially the “Bacon” lettuce and tomato sandwich on chapati (this is important, chapati! not bread!) was amazing and huge. How do they make this bacon? It’s coconut! And it’s a yumfest. But don’t just take my word for it, go eat it. Just as a word of caution, the desserts were not always so great, it was kind of hit or miss there. They were beautiful, but sometimes… unexciting. Pushap also has a few locations, but my favourite one was the one at 975 Rue Jean-Talon-Ouest, Montreal, QC. It’s very close to the Acadie Metro Station (which is on the blue line).
Fabulous East Indian food. The samosas and pakoras were great, but I was partial to the Bindi Masala, and got it as often as possible. This place isn’t exclusively vegan, but they are vegetarian. Cafes
I visited Le Cagabi (5490 St-Laurent, Montreal, QC,) they had a good selection of drinks and when I went I had a pretty tasty sandwich. My visit coincided with the Alternative Pride celebrations, Pervers/cite, and there was a discussion about the experience of queer prisoners in the back event space. I imagine quite a few things happen here!

Places to go
These are just my top few, there are so many things to do, in so many different flavours, it’s hard to limit it to an amount a reasonable person could do over a weekend. I have wonderful memories of the Musee des Beaux-Arts in Montreal. If you’re taking the subway get off the Green line at Guy-Concordia. Admission is free to most of the gallery, with the exception of special exhibitions (special rates are in effect for students and on Wednesday evenings.) It’s well worth a visit. 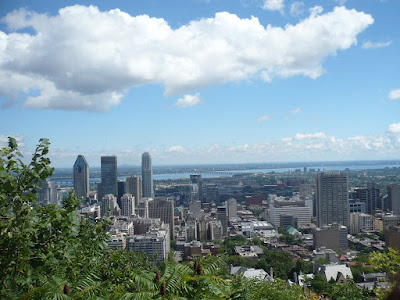 This is where to go to get the greatest views of the city. After a bit of a trek up a hill, you get to a stone building and an outlook that is breathtaking. Getting there is pretty easy, you will need to catch both a subway (get off at Parc Mont-Royal Station) and a bus (#11) to get to the park. You can get here via the Green line on the Metro and get off at Pie-IX Station. The Botanic Gardens were lovely to walk through in the summer, and I imagine uniquely lovely in the winter (just bring a jacket). I would love to come here in the summer or fall and bring along a picnic basket, because it’s nice to just sit amongst the trees.

Depending on the time of year visited and your age, the admission is anywhere between 16.50 (for adults in the middle of summer) and 10.50 (for students during the low season). It also includes admission to the Insectarium, which has an interesting collection of bugs and is full of information, though I have to say I think kids would have the best time at the Insectarium. It’s also pretty close to the Biodome and the Olympic Stadium,

La Ronde! – is a member of Six Flags and is an amusement park on Île Sainte-Hélène, (22 Chemin Macdonald, Montreal).
It’s interesting getting here by Metro, but it’s entirely doable. I took the Yellow Line Metro to Parc Jean Drapeau Station and walked for around ten minutes to get to the park. Be sure to take a ride on Le Monstre, it was a lot of fun.