Relaxing atmosphere, educational chalk based corn diagrams, and air conditioning… what more could you ask for? Well, add to all of that, that the food is delicious. Maizal (133 Jefferson Ave, Toronto, ON) is a recent addition to the Liberty Village area, and how I ended up there was one of those lovely connected Toronto foodie moments. 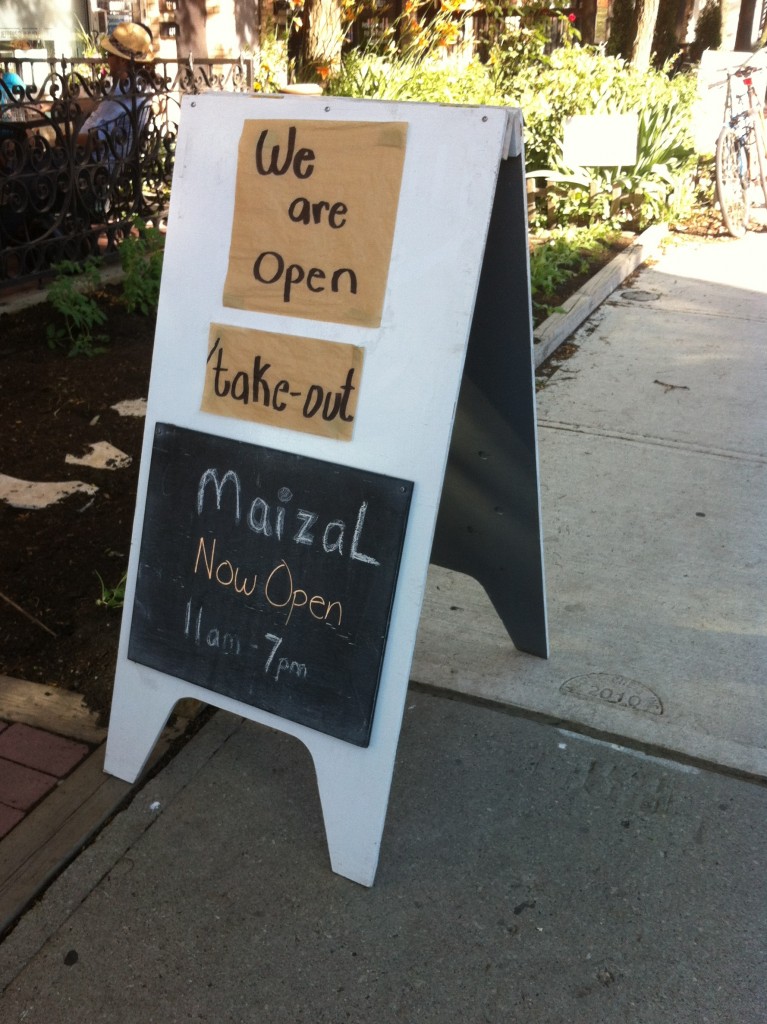 It all started when I saw a blog post from Lettuce Connect about Maizal in the FoodForward facebook group. JC & I are always looking for more vegan options in our area, and some Central/South American food has been reasonably veg-friendly, so I asked Maizal Toronto about their vegan options (on Facebook of course.) And the answer was positive – vegan options and gluten-free vegan options. There are several, so in my calendar it went.

The menu is simple and short. At the moment, the vegan options are: grilled quesadillas sin queso (ask for no cheese/dairy) with either poblano peppers or mushrooms, the sopes with black beans, tlacoyos (bean filled tortillas), and opales (cactus.) All very yummy sounding options. Their tortillas are entirely corn based (and gluten-free) and made fresh every morning. (they also happen to be delicious.) 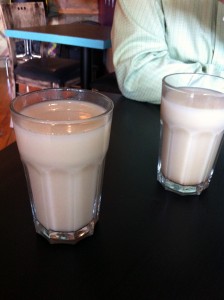 Other things on the menu I should mention: the horchata. Traditionally milk-less, it’s rice based at Maizal, with a cinnamon spice, and perfectly ice cold. They don’t have a liquor license yet… but they’re working on it.

Outdoor patio space is out front on Jefferson, and small but decent. Interior space is ample, but I imagine it’s going to be an area lunch time takeout place pleaser, a tasty, healthy meal for under ten dollars. If you sit in like we did, you can read about the history and cultivation of corn on the very aesthetically pleasing chalkboards (and no joke, it really is interesting.) 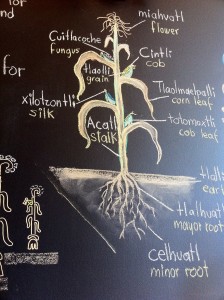 We each ordered 2 grilled quesadillas sin-queso (no cheese.) We sat sipping on horchata’s while we waited and enjoyed the corn diagrams. They arrived, with pico de gallo on shredded lettuce, and a side of refried beans. We prepared ourselves. We exchanged tortillas.

One poblano pepper and one mushroom. One bite and I’ve decided these tortillas are made of tasty magic. That one bite was all tortilla, and it was so rich in maizey-flavour and texturally superior to nearly all other tortillas I’ve had up until now. 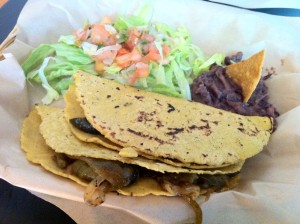 The fillings for both were great, both hearty and satisfying with rich savory flavours. Add some of the pico and a touch of lettuce and it is perfection. The folks at Maizal are doing exciting things with food, and in the local food community as a whole (read more about it on Lettuce Connect – because it’s great stuff.) I’m looking forward to seeing more, and eating much more from them.