In September 2011, I made my first (vegan or otherwise) challah. I remember it because, 1. I blogged all about it, and 2. It was really nerve wracking, because I had never made challah before, and I was going to JC’s family’s house for Rosh Hashanah dinner (though we had all met before then for the first time at a different High Holiday… Passover… no pressure.)

For those of you that might not be familiar with what a challah is (pronounced “hallah”), traditionally it is eaten on the Jewish sabbath and on holidays that allow for leavened bread. It’s also known as – egg bread. Yes, egg bread.

Many of the recipes I’ve seen call for 8 or more eggs. Yes really. And to top it off, there is also usually an egg white wash on top. Now, this (obviously) isn’t impossible to veganize, but it still seems to really surprise people. (which gives me a sense of extra delicious satisfaction.) 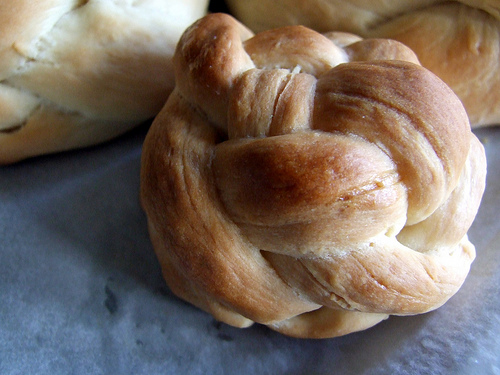 This does tie in with my Vegan Wedding MoFo theme, in that it is a tradition at the reception of Jewish Weddings to have a “Wedding Challah” aka a GIANT super challah (I’m imagining a challah with a cape now). Before the meal is served, there is wine and a blessing of the bread, and in some cases, the bride and groom pass out pieces of challah to their guests, or just save the challah eating to the head table.

We’re not religious people, but JC is Jewish (culturally/secularly), and celebrating the traditions that are important to him, are important to me. I’m not sure if we will include a challah at our wedding, but if we do, I’m probably going to make it myself or see if Sweets from the Earth will take a special order for a super challah (by the way, as of this year, Sweet from the Earth makes challahs for pre-order.)

The thing that really appeals to me about a challah sharing moment at the reception is that it is not just a Jewish tradition to share bread with guests, it also ties in with a Slavic tradition of presenting guests with bread and salt on special occasions (such as meetings, weddings, dignitary visits, etc).

The guest is then supposed to take a piece of bread, dip it in the salt, and eat it, all of which would nod nicely to my Polish heritage. (see: wikipedia The whole bread and salt mini-ceremony is symbolic of “great hospitality,” and (my favourite part) the expression of hope that the guest will never know the pains of hunger. Isn’t that lovely? I’m quite enamored with this idea because that is a genuine wish I have for anyone I know (or anyone really.)

When it comes to challah, I have found some really fantastic recipes, and some have become MeShell’s Traditional Challah ™ (jk). There is a fantastic recipe in Annie and Dan Shannon’s Betty Goes Vegan – and they also kindly have the recipe available on their Betty Crocker Project website.

There is also this one from Creative Jewish Mom (but I still haven’t made it, because making 4+ loaves of braided bread is still much more ambitious than I have ever had in mind), and the one I’ve used several times – Egg-Free Challah off of VegKitchen by Rachel Ornstein Packer (Lick the Bowl)

Yesterday I followed along on instagram as Isa Chandra Moskowitz made challah and word on the (insta)street is there is a recipe coming soon. But until then, I’ll just be using a bit of turmeric to fake-egg any future challah making attempts up a bit (I’ve heard some good things about sweet potato too.)

Earlier this year, I made a short Vine video (because, by the way, I’m still refusing to use video on Instagram) on how to make a round challah. I really enjoy sharing in the process of braiding it, because it can be difficult at first, but once you understand the way the dough goes, it makes so much sense.

Also worth checking out is Creative Jewish Mom’s guide on “How to Braid a Round Challah for Rosh Hashana” really helpful, so perhaps you will too. Later this evening our celebration of Rosh Hashanah will be augmented by local organic apples we bought on Monday at West End Food Coop’s Sorauren Farmers Market, and the above container of Bee Free Honee I picked up from our recent trip to New York City. (you can also find it on Vegan Essentials.)

Typically Rosh Hashanah meals include apples and honey, to symbolize a sweet new year. But of course, I’d like the new year to be sweet for bees too. I imagine you all know how I feel about honey?

In any case, L’Shana Tova to all who celebrate, may you all have a happy, healthy, and beautiful new year. & Happy Vegan Mofo to all!