We went into BIVY on Sunday this weekend. It’s one of the cafes on this session of the Indie Coffee passport. It’s another one of those spots that has only been open for less than three years. They opened in mid-July 2012 in the Brockton Triangle/Brockton Village area. They do food, coffee, and weekend brunch. 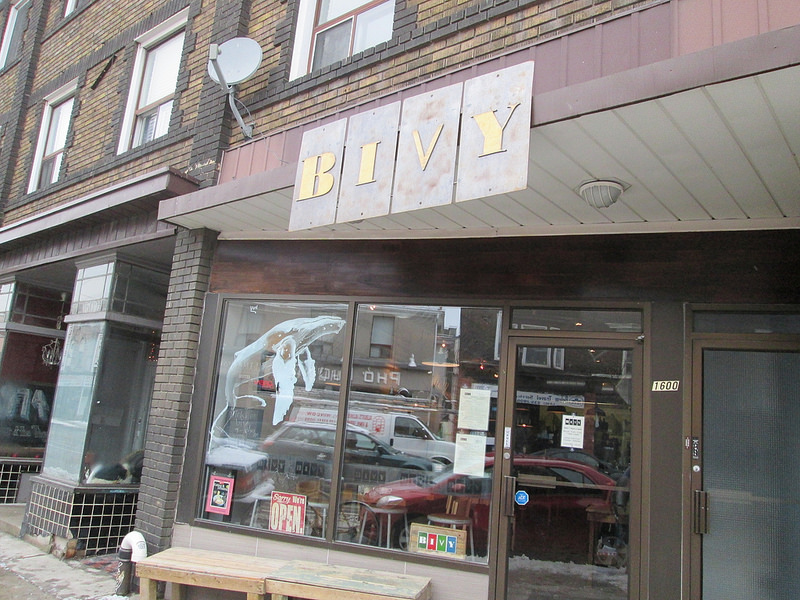 It felt like more of a restaurant than coffee shop (or as they say an “Urban Food Outpost“), but they didn’t seem to mind us only ordering coffee. Service was super friendly, the latte was totally my style (but JC didn’t dig it as much as I did.) There are a bunch of options for their Indie Coffee Passport offerings, but we went with the usual – soy latte. BIVY appears to have their own Bivy Collective espresso blend, which I really liked. The latte had a nice thick foam, and the coffee had a rich full flavour.

They also sell a variety of products in the back corner, like my favourite chocosol chocolate, stasis preserves, Social coffee & tea bags, cup cozies, and a bunch of other things that I no longer remember. Overall, I really liked the space, it was warm, inviting, and as an added bonus they have wifi (that they even invited us to use.)

Vegan menu options seem fairly limited – to potentially nonexistent (unless you count salad,) though you might want to ask about the soup (according to the website the soups are always dairy-free). In case you’re curious, the “V”‘s on the menu mean lacto-ovo-vegetarian.

They brew Social Coffee (roasted in Richmond Hill, ON) a local roaster which recently (in 2012) won the SCAA Roasters Choice Award, so I’m in good company thinking the coffee is good. (and it’s still good.)

Yet another great find on the Indie Coffee Passport.