I’m surprised and also not surprised how much I have to say about my first visit to ExpoWest. I never expected to have so many posts on one event, but there are genuinely a lot of interesting products releasing new or new-to-me ideas.

Part one focused on the vegan meats & other alternatives
Part two focused mostly on milks and frozen desserts.

This is part three, focused on the Non-Dairy Cheese Co’s, the Not Butters, and the Miscellaneous non-dairy products we were into at the show.

It’s still mostly a mystery why I can’t find Teese in Canada other than to order it online, but I suppose a huge reason is the widespread success of Daiya (and the fact that Daiya is a Canadian company.)

Teese was one of the first vegan cheeses I ever ate on a pizza, so I have a fondness for their mozzarella, especially if it’s grated and melted a little. There was nothing new being shown off over at the Teese Booth, but it always feels new to me, especially since I still think of them as part of “Chicago SoyDairy” where their name is as of at least 2012 actually “Chicago Vegan Foods“.

They’ve got a couple of cheesy sauces (Nacho sauce, and creamy chedder sauce) that sound delicious, and we’re kind of kicking ourselves for not just buying a case of the stuff at the show. Heck, even as we were walking away, JC turned to me and said… we should have just ordered a whole bunch. We’ll fix that on our next trip to the USA. You can also buy Teese on Vegan Essentials.

(also, Dandies are great – you can buy them at the West End Food Coop in Toronto.)

Daiya was launching a new cheese wedge flavour – Smoked Gouda Style. They also claimed that they’ve redeveloped their block cheeses and made them tastier AND fortified them with some extra calcium and B12. 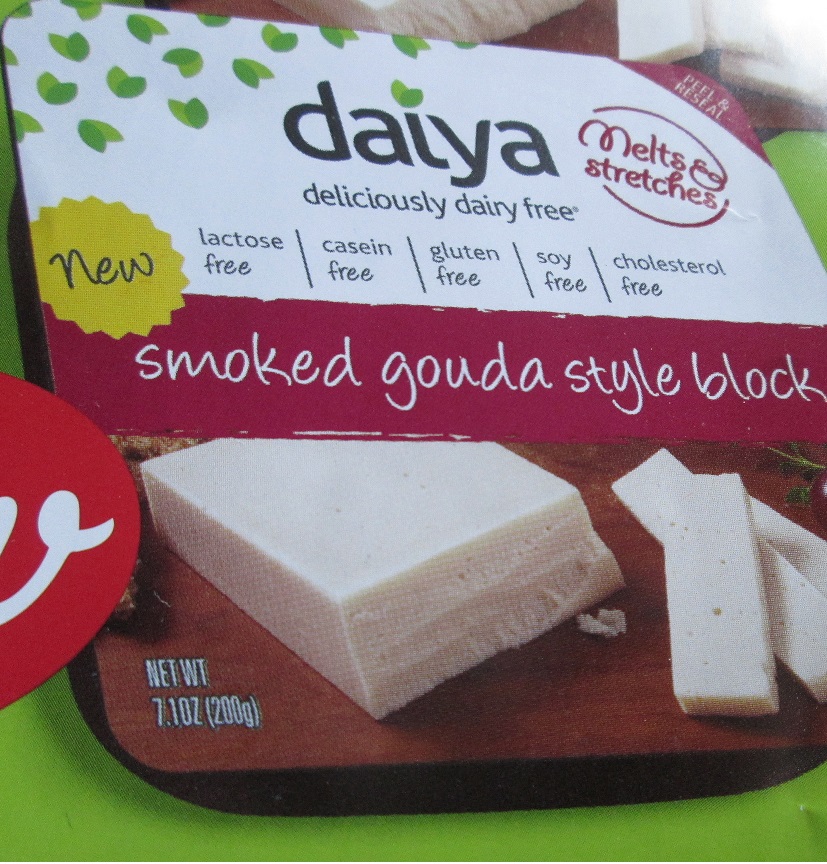 I tried the smoked gouda, and while it didn’t transform me back to childhood visits to a Polish deli for giant wheels of Gouda cheese (it was one of my favourite cheeses when I was a little girl), it was still a reasonably close option.

I believe VegWorld Magazine gave Daiya an award for their Gouda as the “Best New Vegan Product” at ExpoWest, so you may like it more than I did.

I known of Parmela mostly for their Parmesan cheese replacer that we picked up from a NY state Wegmans Market, but as I learned at the show Parmela also makes several fantastic treenut cheeses (and sauces) – I tried the Black Pepper variety at the show and it was really really delicious. Great texture, great pepper flavour, creamy. But don’t take my word for it, read the review over at Vegan Fatty, they’ve got some great photos of the cheeses on their blog too.

The parmela folks didn’t seem interested in bringing their product to Canada or talking to Canadians (at least not this one), so I wasn’t able to get much information, but you can sometimes get their treenut cheeses on Vegan Essentials (just not right now). But you can get their parmesan cheese replacer on VE right now.

I found it interesting to meet Nutiva at the show. They’re positioning themselves as an alternative product to Earth Balance and very heavily and overtly promoting their fair trade, orangutan friendly, and sustainable red palm production.

On their promo materials:

“We source our Red Palm from small, organic, family farms in Ecuador to ensure no habitat is harmed. Through a partnership with Natural Habitats we support local community and environmental efforts”

It’s quite good, so I’m interested in seeing how they do. it comes in 425g tubs, and there is either a shortening or a buttery spread. We bought a tub of the buttery spread after the show and took it home with us, and I used it to make pie yesterday.

They’re working on spreading through the USA. The promo materials we picked up at the show said the shortening would be available May 2014, and the buttery spread would be out in September 2014 – but if you go to a Whole Foods, especially in California you’ll find them on the shelves right now. We tend to buy one or two cartons of Svelte every time we’re in the USA. At ExpoWest they were launching a new flavour – “You’ve Got Appeal.” A Banana creme protein shake. It’s organic, has soy milk, and has a really awesome banana cream flavour. It’s not out yet (aiming for the end of March), but I am looking forward to having it again sometime.

I really liked Tipu’s Chai Blend. It was lightly spicy and flavourful and comes in several varieties.  I tried the Sweetened Chai Tea Blend, and Chai Tea Latte Blend and liked both of them quite a bit. You can read a full review of the product over at Vegan Miam.

They’re not widely available in Canada but I was delighted to find that they list Crema Coffee in Toronto as one of the locations to get their Chai. Yum.

This is only part three, but I have at least one more post on ExpoWest to do.

How about you, do you find any of these interesting?
Have you tried them? What do you think?