On Saturday we wandered over to Yonge & Dundas Square to check out the 10,000 Tastes, 1 Billion Reasons event. A celebration of veg products near and far. I missed it last year, so we made a point to visit it this time. When we arrived shortly before noon, there was a decent crowd, and people were already standing in line for free samples. The longest line by far was for the Gardien burgers, but everyone was also picking up free samples of Silk, Daiya, Sun Warrior Protein, Earth Balance, New Moon Kitchen cookies, Yoso, and vegetable noodle stir-fry from Sunrise Soya Foods (thanks Val!), and listening to Rip Esselstyn (authour of the Engine2Diet) talk on stage about his plant-strong diet with James “Lightening” Wilks (from the Ultimate Fighter) and former hockey player, Georges Laraque. 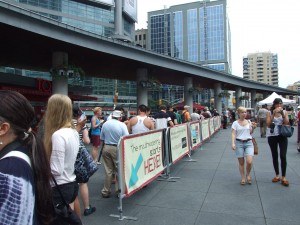 We started with a quick walk around, there was Daiya displaying and sampling the block cheeses that still aren’t available anywhere in Toronto (Makes me miss Panacea just a little bit more.) I’ve tried the pepper-jack wedge and it was great, but at the event JC and I sampled the Havarti and it was interesting and sharp. We had a wine and cheese thing to go to that evening, and it would have been awesome to bring along a vegan cheese wedge. 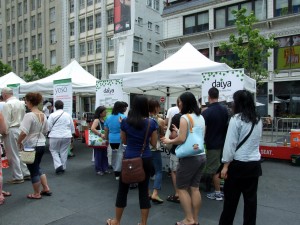 Yoso, an Ontario based soyfood company, was showing off their chocolate coconut based yogurt, which was cool, because we had been able to sample a pre-production version at last years Vegetarian Food Festival. Still tasty. I’m looking forward to seeing it on food shelves, I like the idea of a company that makes its products with locally grown identity-preserved soybeans from southwestern Ontario.

Several animal rescues and sanctuaries made an appearance at this event, which was important; too often the ethical discussion can get lost in the “plant-strong” diet cheerleading. I saw Snooters Rescue, Cedar Row Farm Sanctuary (the sanctuary I had the privilege of visiting on their open house last month), Wishing Well Sanctuary, and Ladybird Animal Sanctuary. The latter two I hadn’t heard of before, so it was great to learn a little more about them.

Ladybird Animal Sanctuary is centered in Hamilton, Ontario and serves as a no-kill rescue network of volunteers and foster homes for companion animals (like cats, dogs, guinea pigs, etc.) They rescue animals from high-kill shelters and place them with fosters until they can find their forever homes. Follow them on Facebook or twitter. 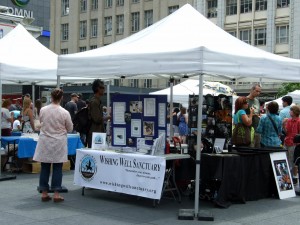 Wishing Well Sanctuary is located near Bradford, Ontario, and takes in animals from farm or research labs and rehabilitate and care for them. One important thing I liked is that they are also developing seminars and workshops for mentally ill, abused, or otherwise troubled children, teens, and adults. I think the idea of having a place where abused, neglected, or mistreated animals (human and otherwise) can try and heal together has the potential to be powerful. I look forward to seeing more from them. Follow them on Facebook. 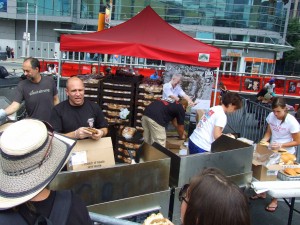 I’ve never had the Gardein veggie burger before this event, but how could we not try them here? Members of the Toronto Fire Fighters Association were volunteering and cooking them up on big grills, the very long line was moving quickly and soon we had veggie burgers getting covered in ketchup and mustard in our hot little hands. 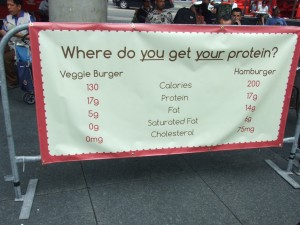 As for the burgers, JC and I liked the onion content, and they were generally pretty tasty. We actually ended up buying a pack of the burgers later (conveniently they were handing out coupons at the event) so I’m looking forward to actually grilling them up on our BBQ. 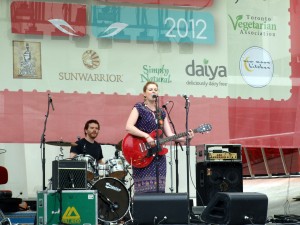 After a lovely time eating veggie burgers, listening to the lovely music of Jenn Grant and chatting with different veg related businesses, we finished the afternoon off by walking over to Sadie’s Juice Bar in Kensington Market and getting a cinnamon bun for dessert from Rise Above. What a great day for an event, and the perfect day to be outside.