Well, nearly 4 months ago I wrote a big long piece about the birth of our new baby, and since I spent about 24 hours in a hospital, that meant that they also tried to feed me a few meals at St. Joseph’s Hospital in Toronto, and since some folks were curious what vegan hospital food looked like… here it is! 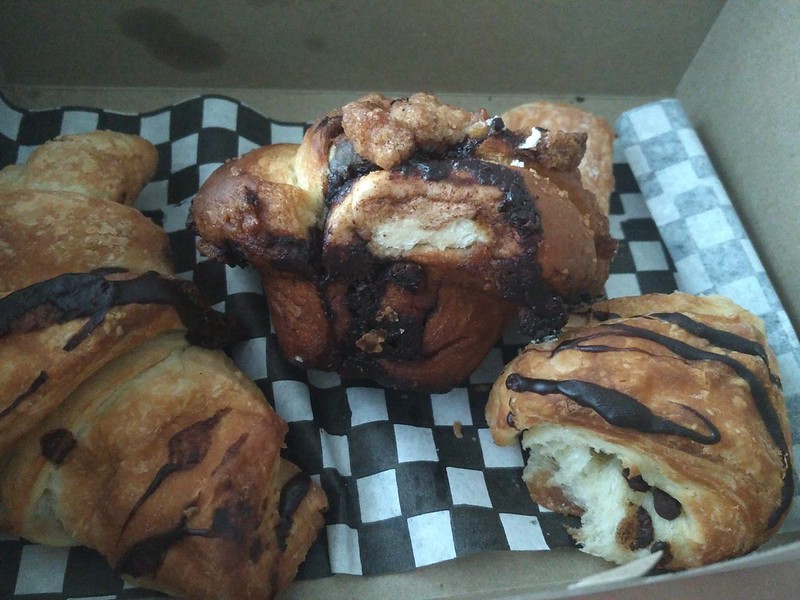 The first night, right after surgery, no one got the vegan memo, and to be fair, the hospital stay was unexpected (by me and them) Sadly, there was some kind of icky chicken thing waiting for me, so I passed on it. JC had brought over some baked goods from TBC before we even knew we’d be meeting the baby that day, but he also made sure I had lots of buckets of ice water afterwards. I was too busy basking in the afterglow of meeting our little sapling anyway (plus it was super late in the evening.) 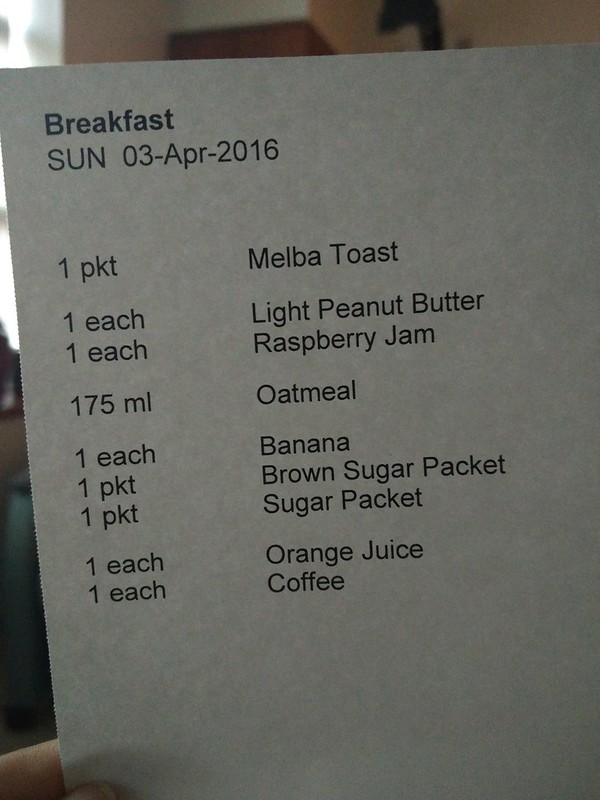 In the morning I got oatmeal, and the person that brought me my tray said she had been vegan for a year or so and congratulated me on my long term veganness. She was also impressed that JC was also vegan since her partner and son would not do it. Despite that, I did however end up with a carton of (dairy) milk on my tray, but obviously skipped it (I think we’d all have a bad time.)

I was quite surprised there was no soy milk offered at any meal. At a hospital stay in Edmonton, AB once upon a time, I had more soymilk than I knew what to do with. 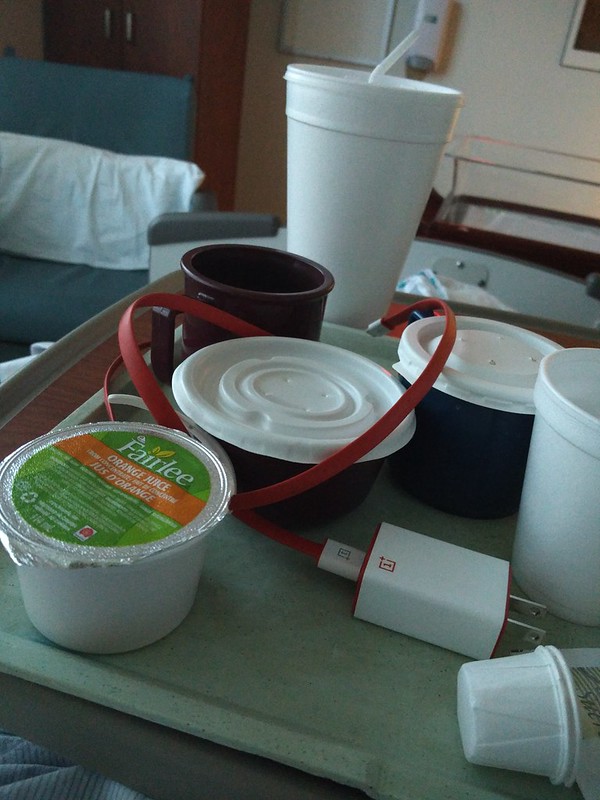 The key to making this breakfast extra awesome (or just basically palatable) is mixing the peanut butter and the banana into the oatmeal. The oatmeal was cooked without anything but water – there was no salt, so it’s oatmeal boiled to hell (this is a trend) with just a touch of flavour and the texture of a loose paste. I’m not going to lie – I thought it was delicious (but I was very very hungry by this point.)

Left over melba toast from the morning. Vegetable chili, with some rice, and broccoli microwaved to obliteration. There was an orange, (which JC opened for me, since I hate opening peeling oranges), packets of sugar, salt, & pepper. A small container of Cranberry Juice, a cup of black tea and a couple of slices of lemon. 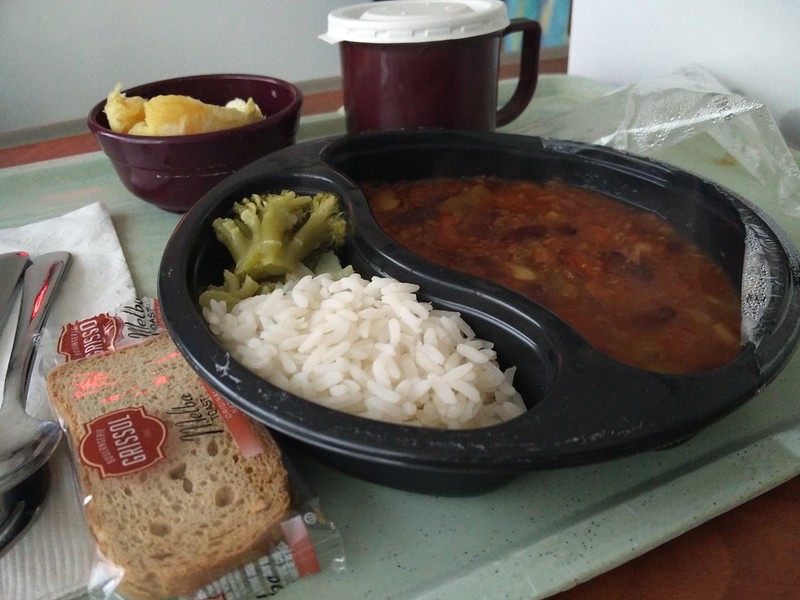 I was pleasantly surprised by this one, it was pretty hearty and had a variety of vegetables and beans in it. The broccoli though – was sad broccoli. I love broccoli. I was still happy to see it. 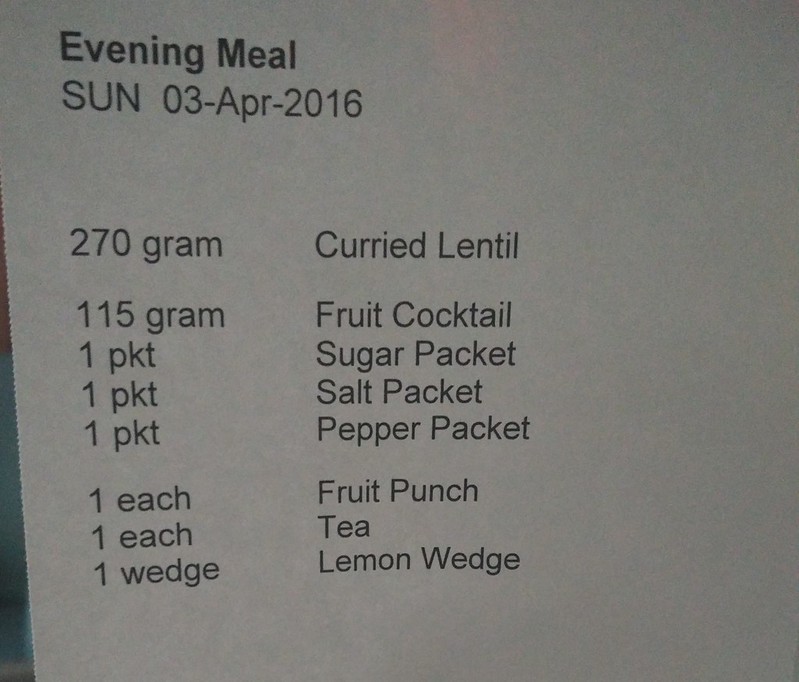 And finally, dinner – was this curried lentil entreè with more broccoli microwaved to hell, and a bit of corn. Again, not terrible. Lentils + Rice and some light spices. In the background you can see the empty bassinet, probably because the kid was attached to me during most meals (mine and his.) 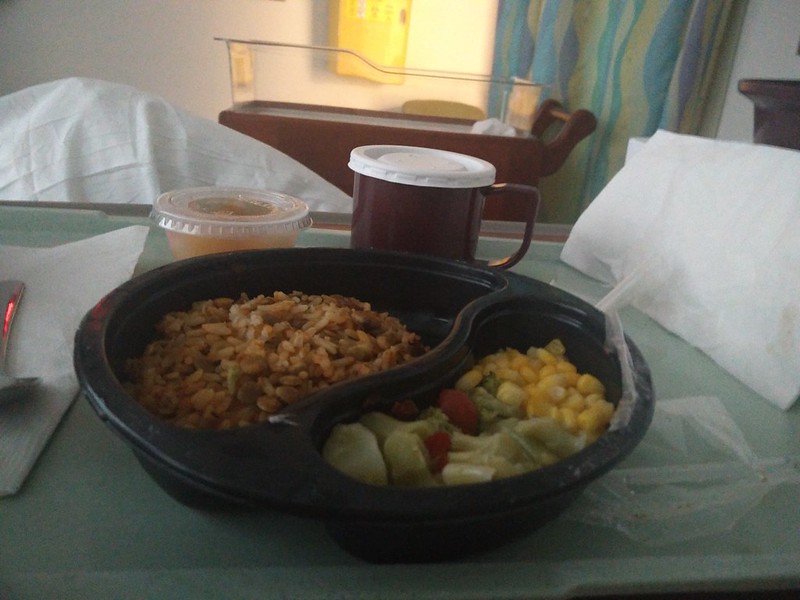 Overall, the vegan food options weren’t terrible, but everything vegetable was probably steamed to death just by nature of industrial food procurement and production. I’ve heard from folks spending a bit more time in the hospital that the options did get a little monotonous after a while, because they only have a few vegan ones to cycle through.

Have you been in a Toronto hospital? Do any of these look familiar? Did you have any other options?