I’m in the process of developing a morning routine that involves going to the gym and reading (on the elliptical trainer or stair climber.) I find it strange to read at home (vs. in a cafe) or in places other than a streetcar, subway, or bus on my way to some other destination since somewhere along the line, I stopped looking at reading as a get away, and more of a time filler when for some reason or another it wasn’t feasible to be doing something else.

Lately I’ve been attempting to shift my thinking away from reading as a waste of time (and I know it isn’t), and more towards reading for the pleasure of reading or learning something new (that’s not on the internet). Curling up with some new (usually-non fiction) book still doesn’t really happen, when I’m at home, but reading at the gym has already helped me polish off several books in a short span of time, and I think I’m getting back into the swing of things. 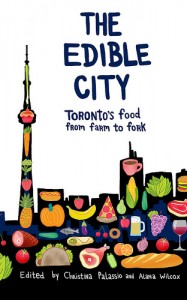 Upon the recent recommendation of Ida of Yummy Vegan Dinners I got a copy of The Edible City (Library). I’ve seen it at the West End Food Coop, and on foodie reading lists, so it seemed like time to read it myself. It’s a collection of 41 essays by several well-known and not so well known writers, activists, and other food people. The book is in part a love letter to the food of Toronto, a critical examination of our local food system, a commentary on food ethics, urban agriculture, an exploration of food history in Toronto, and an introduction to groups in the city making good food things happen. The unifying theme I’m picking up as I’m reading is the connecting power of food –  that human factor that brings us all together in not only the universal need to eat to live, but our use of food to build community, connections, and understanding.

While I’ll never (dare I say – ever) romanticize backyard chicken farming like some other local foodists do (and will actively oppose legalizing it on every front,) I will romanticize the growing of food and not lawns, or the picking of fruit with Not Far From the Tree. I like hearing the story of food as it travels through our food system and gets onto our plate. How does food connect us? Who is making it happen, how is it happening? These are things I care about. There are stories about rediscovering your city through food, or in my case, simply discovering the city I live in and the interesting people within this little-big city. It covers a lot of ground, and I’ve only just finished the first two sections (Antipasto, Primo, see what their doing there?) – but I’m enjoying it quite a bit. I also like that it has been critical of how some issues play out both via policy and in cases where policy and reality don’t really match up.

I also liked finding all these Toronto tips. 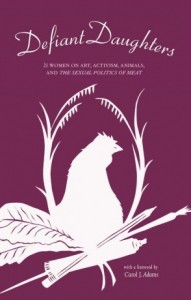 Another book that very recently came out that I’m looking forward to checking out is Defiant Daughters, another book of essays, but this time it’s a collection essays from 21 brilliant women and the impact Carol J Adams’ The Sexual Politics of Meat had on them, their art, their activism, and their relationship with animals.

I usually read everything on my Kobo or on the iPad, but I think I’d love an actual copy of this one. So many inspiring and brilliant people have added their thoughts to this, and I still have not read the book that motivated this collection, although, oddly enough I can remember the first time I picked The Sexual Politics of Meat off of a bookshelf of the Jasper Place branch of the Edmonton Public Library (p.s. they don’t have it anymore.)

I think I was 8 or 9, and I was looking at it, confused why a lady would be naked on a cover and labelled with pieces of meat. I didn’t make the connection, but I didn’t forget that encounter in 300 section. The words were beyond my scope at the time, and I still haven’t read it, but I’d like to.

And by the way, you can win a copy over at Our Hen House.

The Ghosts in Our Machine

I’ve been eagerly awaiting the release of The Ghosts in Our Machine ever since I heard about the project and soon (okay… in a month) we’ll be able to actually see it! I anticipate tears and sadness during this movie, but that’s become par for the course.

Film Synopsis for the Ghosts in Our Machine

With the exception of our companion animals and a few wild and stray species within our urban environments, we experience animals daily only as the food, clothing, animal tested goods and entertainment we make of them. This moral dilemma is often hidden from our view.

Through the heart and photographic lens of international photographer Jo-Anne McArthur, we become intimately familiar with a cast of non-human animals. The film follows Jo-Anne over the course of a year as she photographs several animal stories in parts of Canada, the U.S. and in Europe. Each story is a window into global animal industries: Food, Fashion, Entertainment and Research.

The word premiere is happening here in Toronto at the Hot Docs, with screenings starting on April 28th, 2013. Buy Tickets. See the trailer

We recently picked up an espresso machine. It’s one of those purchases that we’ve talked about for months, it may have even been a year, but now it’s in our kitchen, and I’m learning how to make lattes with different non-dairy milks and realizing how nice it is to make my own.

I’ve really enjoyed going to cafes and drinking fancy coffees with the Indie Coffee Passport, and the now over Coffee Conspiracy that started my love of the indie coffee Toronto experience. JC and I spent several dates early in our relationship going to various indie coffee passport stops together, and I have really fond memories of that. The coffee adventures are mostly over though – I rarely stray from my small slice of Toronto. TAN Coffee (which is unfortunately going to move from their lovely Queen Street location due to increasing rent), i deal coffee on Ossington, or Alternative Grounds on Roncy. So far I’ve used up the two bags of locally roasted Detour Coffee beans we got in our gift bags from Recipe for Change, and have since picked up beans from two other spots. Did you know Costco has fair trade coffee beans? I didn’t. And in direct contrast to our Costco shopping, I also picked up a bag of horizontally traded Chocosol coffee beans I’m looking forward to trying both varieties out.

Other stuff: I’d say my cats, but they’ve been so bad lately there are no words. Ok Ok, I always love them. This song from garbageface has been a regular song on my playlist, which is a little weird because I know the guy (but maybe that just makes it more awesome?) Vegan Rock is coming soon (April . Farmers’ Markets. The 1000 feral cat shelter built at the Toronto Humane Society event on Saturday March 23rd.

Coffee. The Ghosts in Our Machine., Defiant Daughters, Thursday thursday must be a good day. Edible City

4 thoughts on “Things I Love Thursday – Edible City, Defiant Daughters. Coffee. The Ghosts in Our Machine.”