For the last few weeks we were in New York City, cat sitting and relaxing for a friend of a friend. The nice part about NYC is being able to get nearly anything I want, whenever I want. Maybe it’s the large population in a relatively small area, maybe it’s just America in general, but it always seems like anything is possible there. Maybe that why I keep getting drawn back into the fold. 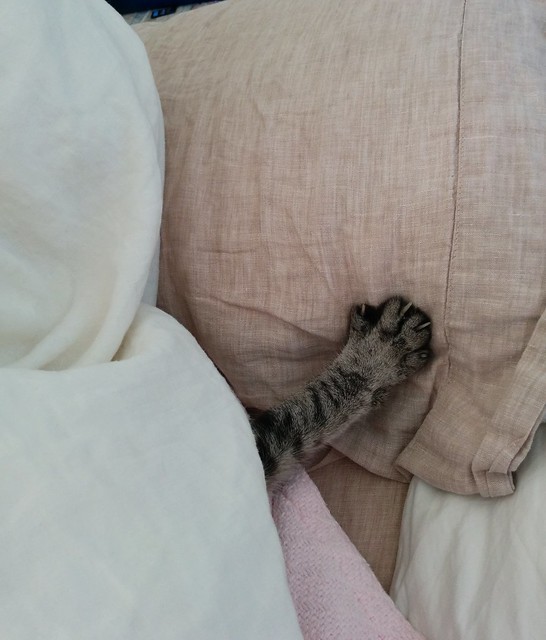 We were staying in Hells Kitchen in Midtown Manhattan which was conveniently located just outside of the delivery zones of a variety of delicious vegan restaurants, thankfully, this helped encourage us to go outside somewhat regularly. As it was tempting to do as Gizmo is doing above (the cat we were borrowing for our visit), and remain inside, wrapped in blankets, ordering delivery food (thanks seamless!) and groceries (thanks instacart!) and at most standing by the window looking outside. 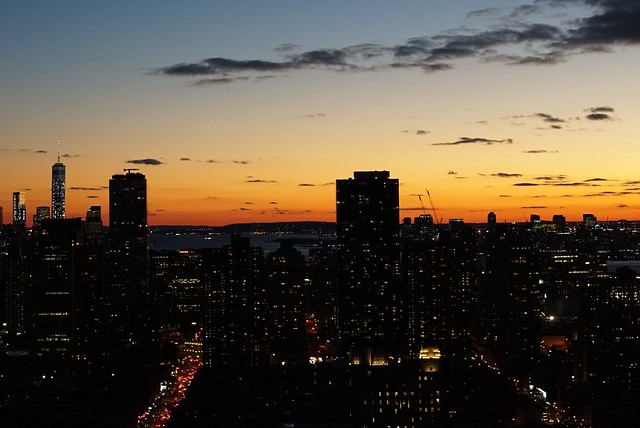 But ultimately, the trip still managed to remind me how much I like walking, in spite the cold. So we did a lot of walking, our google fit and pebbles excitedly buzzing and displaying cheers after a few hours of significant activity everyday. Long walks to wherever. Sometimes with a purpose. Sometimes in search of a purpose, in hopes of stumbling upon something interesting.

On one of our first few days there we walked over to Bryant Park to check out their Winter Village Market, which had a bunch of vegan vendors in one of the sections. Word is that they’re aiming to be even more vegan friendly next year, so it would be cool to visit again. But we wandered around in the lightly falling snow/rain, and meandered through crowds, initially wondering what was so vegan about the Winter Village Market, but eventually finding the main vegan zone. 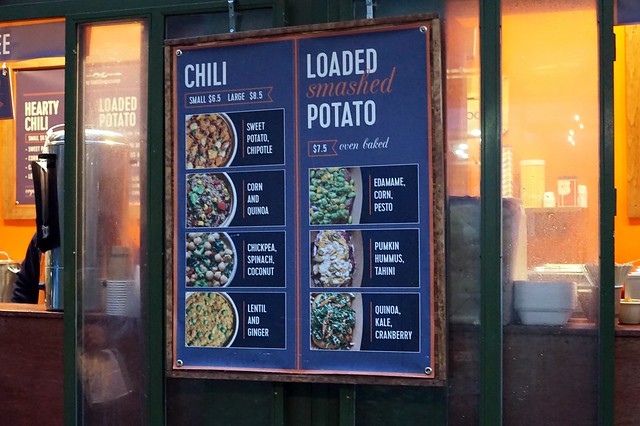 There were loaded smashed potatoes, soup in a bread bowl, pickles, square pies, Belgian fries, chocolate, and a bunch more things here and there. 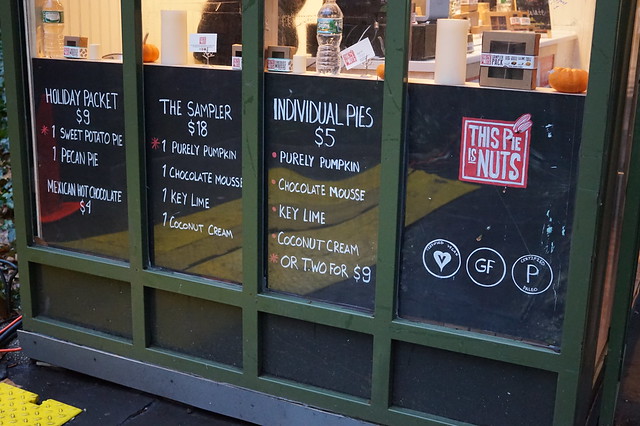 We bought a sampler pack and a couple of hot drinking chocolate’s from This Pie is Nuts which is Certified Vegan, gluten free, and certified paleo (which apparently is also a thing now.) The nice part about the spicy drinking chocolate was that the flavour transported me to a cold winter market night in Toronto where JC and I shared cups of drinking chocolate from Chocosol in David Pecaut Square. That nice bitter rich quality that only a good cocoa can achieve.  I drank it greedily and so no pictures happened. 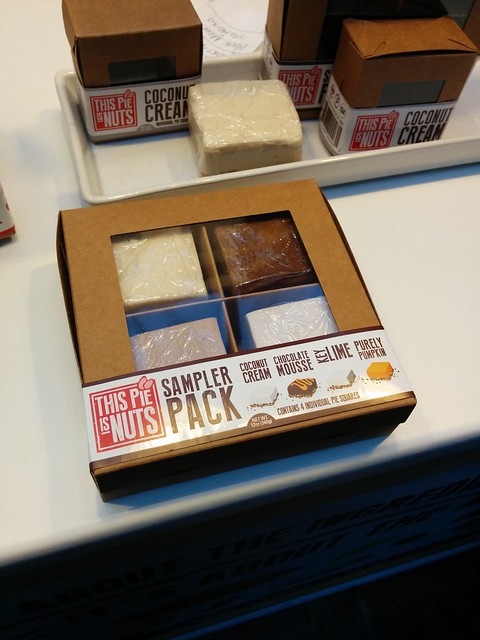 I grabbed a loaded smashed potato from Two Tablespoons, covered with pumpkin seeds, tahini, and hummus. It was warm and had that nice steamy quality that was perfect for the gloomy weather, and left me feeling just a touch more cozy. 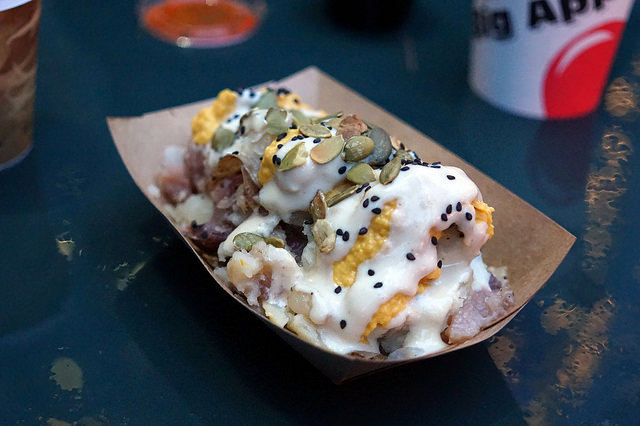 JC got a container of Belgian Fries from The Lucky Sailor, because of course potatoes. Because who can go wrong with a small snack of salty hot potato sticks with a few dipping options? 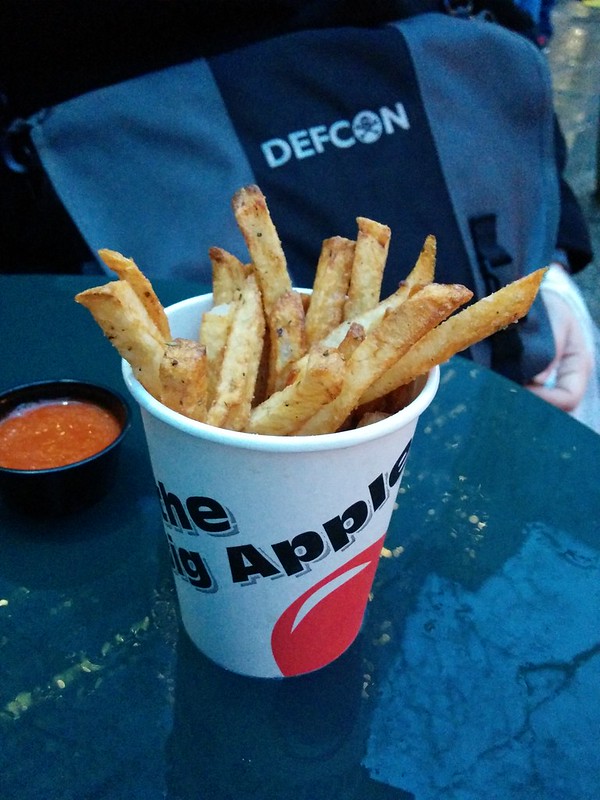 I left with a perfect fuzzy onesie from The Snooze Shack, which had both a hood AND feet, which would pair wonderfully with the Dr. Who Alon-zzzz onesie JC got from the cats for Hanukah Christmas. We are quite the pair of complete grown ups.

I always meant to go back to the Winter Village Market during my visit, and made a few feeble attempts at meeting people there but never returned despite wanting to have a soup in a bread bowl so badly I’m now compelled to make that happen here at home. (Perhaps following this recipe from Go Vegan Meow!)

I think that’s the thing about New York though, and in many cases that’s similar to Toronto. There are so many things to do, almost all the time, that sometimes it’s easier to just do nothing at all. Plus there were a tonne of people everywhere, and it was cold. So many easy excuses.

This year I’ve successfully fought many of those hibernation days off. Blizzard? No problem. Just put a scarf on it. Sometimes a hat. Wear a pair of gloves.

How do you fight off the inclination to hibernate around this time of year?